The real state budget villain is the housing crash

Lesson from Wisconsin for Washington: A growing economy is more important than a balanced budget 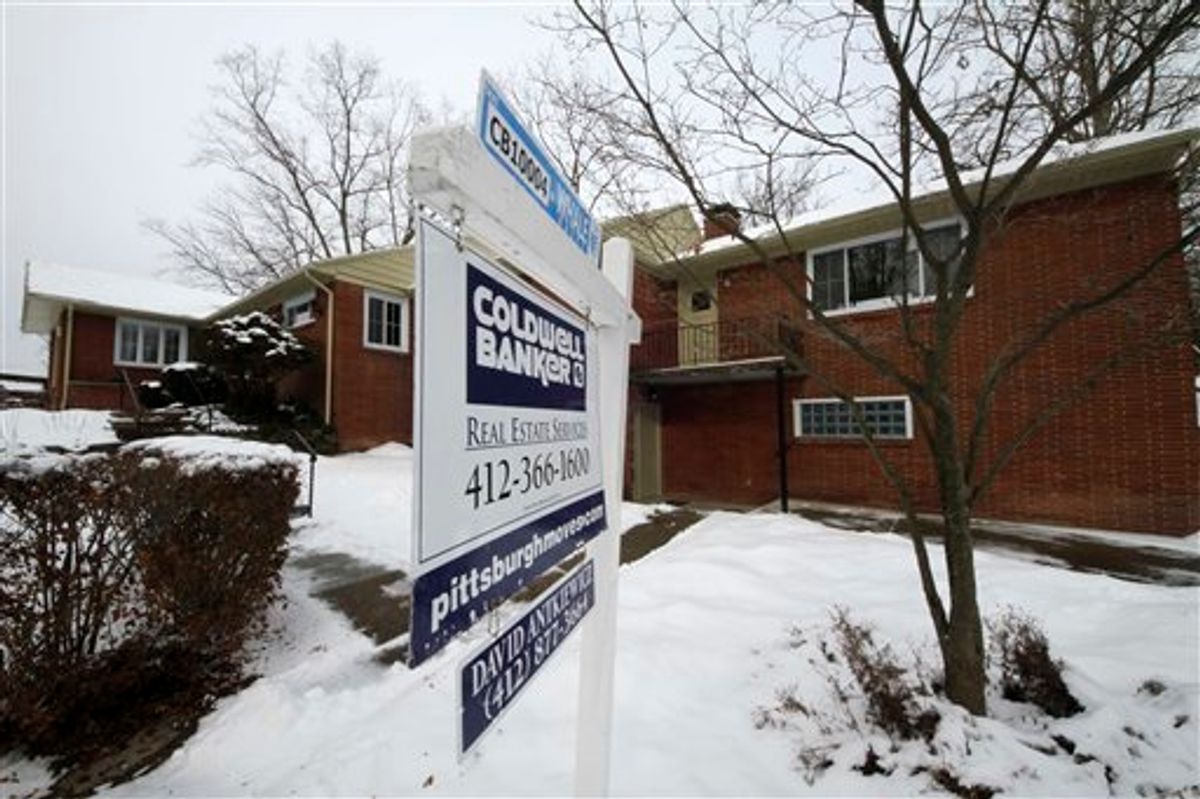 In this Feb. 9, 2011 photo, a house for sale is shown in Mt. Lebanon, Pa. More people bought previously occupied homes in January, but sales surged on a rising number of foreclosures and all-cash deals. (AP Photo/Gene J. Puskar) (AP)
--

Why are so many states experiencing serious budget problems? Despite what you might be hearing from conservatives, the answer has little to do with supposedly out-of-line public sector wages or unfunded pension liabilities. The real culprit is the housing crash.

Mike Konczal at RortyBomb provides an illuminating chart that graphs the "relationship between state budget shortfalls and negative equity." (Negative equity, in housing terms, means the outstanding balnce of your mortgage loan is worth more than your house.)

There are lots of reasons for this -- the states hit worst by the Great Recession also have high unemployment -- with consequent big increases in social welfare spending -- along with their housing busts. It shouldn't be controversial to point this out. But the same Republicans who scorned Rahm Emanuel's famous observation that "you never want a serious crisis to go to waste" as fiendishly Machiavellian, have adopted exactly the same strategy: Use the cover of recession-induced to ills to achieve political goals.

Have Republicans overreached? We don't know yet. But even though Democrats appear invigorated by the pushback in Wisconsin, it's important not to lose sight of the real problem afflicting the U.S. economy: the lingering effects of the recession. This is a much bigger deal than budget deficits at either the state or federal level.

Everyone needs to go to read David Leonhardt's superb piece in New York Times explaining how Germany's decision to eschew stimulus in favor of austerity appears to be failing.

Germany's economic growth surged in the middle of last year, causing commentators both there and here to proclaim that American stimulus had failed and German austerity had worked. Germany's announced budget cuts, the commentators said, had given private companies enough confidence in the government to begin spending their own money again.

Well, it turns out the German boom didn't last long. With its modest stimulus winding down, Germany's growth slowed sharply late last year, and its economic output still has not recovered to its prerecession peak. Output in the United States -- where the stimulus program has been bigger and longer lasting -- has recovered. This country would now need to suffer through a double-dip recession for its gross domestic product to be in the same condition as Germany's.

What do we learn from the correlation between states with the worst housing bust and budget shortfalls? If U.S. economic growth slows, the federal deficit situation will get worse. Republicans believe that cutting government spending will spur economic growth. But the evidence we have from countries that have attempted such a strategy since the Great Recession began to ebb -- Germany and the United Kingdom -- suggests exactly the opposite. Austerity policies are not the right medicine for a fragile economy.

This is worth remembering as Wisconsin's budget battle gets resolved and the focus moves to the fight over  federal financ. As long as we are arguing about whether public sector unions are or are not a factor in the state shortfalls, we are missing the big picture -- balancing the budget, in the short term, should not be our primary concern -- maintaining economic growth. And laying off thousands of federal workers as part of an abrupt slash in spending is not going to serve that goal.