As U.S. rebuilt ties with Libya, human rights concerns took a back seat 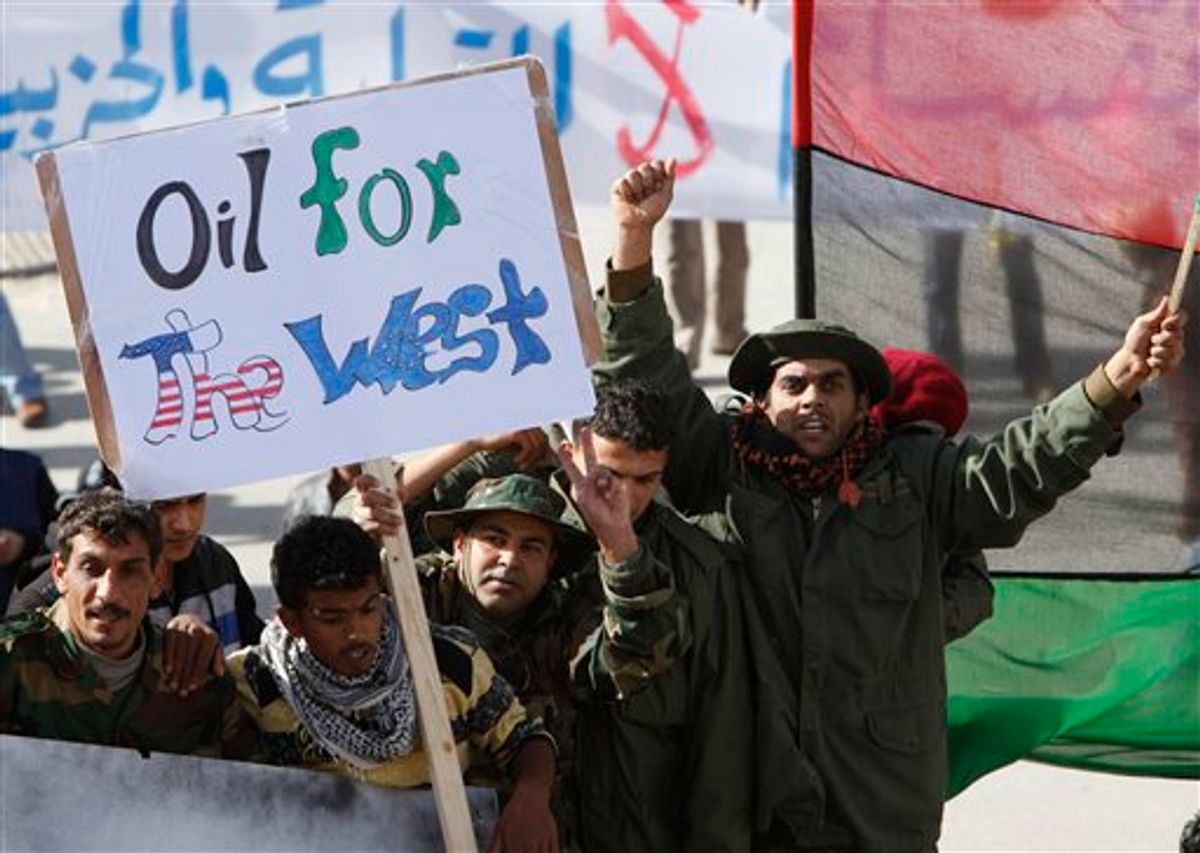 Libyan army soldiers shout slogans against Libyan Leader Moammar Gadhafi during a demonstration, in Tobruk, Libya, on Wednesday, Feb. 23, 2011. Heavy gunfire broke out in Tripoli as forces loyal to Moammar Gadhafi tightened their grip on the Libyan capital while anti-government protesters claimed control of many cities elsewhere and top government officials and diplomats turn against the longtime leader. (AP Photo/Hussein Malla) (AP)
--

This story was originally published on ProPublica.

The brutality in Libya has prompted the State Department to issue several statements in recent days strongly condemning the Libyan government and calling the bloodshed “completely unacceptable” -- though it stopped short of threatening sanctions.

The country’s dictator, Col. Muammar Qaddafi, said on Tuesday that the protesters who have been killed “deserved to die,” and he vowed to fight “until the last drop of my blood.”

The U.S. and Libya have a complicated history. Under the recent Bush administration, the U.S. lifted sanctions and formally restored full diplomatic relations with Libya after its government renounced terrorism and dismantled its nuclear weapons program in 2003. At the time, the shift was heralded by State Department officials as “a success in our foreign policy.” A BBC correspondent went so far as to call it a “fairy tale.”

The State Department said that normalizing relations with Libya would “enable us to engage with Libyans more effectively on all issues,” naming human rights as one of the top priorities. A 2010 Congressional Research Service report described the U.S. rationale this way:

From 2004 onward, Bush Administration officials argued that broader normalization of U.S.-Libyan relations would provide opportunities for the United States to address specific issues of concern to Congress, including the outstanding legal claims, political and economic reform, the development of Libyan energy resources, and human rights.

Critics, however, said that as the U.S. restored diplomatic ties with the repressive regime, it put narrow strategic interests ahead of democracy and human rights.

“The State Department continues to engage Arab dictators at the expense of dissidents who support transitions to peaceful, modern societies,” Libyan-American activist Mohamed Eljahmi wrote in a Washington Post column in 2008. Eljahmi’s brother, Fathi Eljahmi, was a prominent Libyan democracy activist who died in 2009 after years of persecution and imprisonment by the Libyan government. As a U.S. senator, Joe Biden interceded on Eljahmi’s behalf, leading to his release, but it was temporary -- Eljahmi was abducted again two weeks later.

“It’s tricky,” Tom Malinowski, Washington Director of Human Rights Watch, told me. Malinowski said that Human Rights Watch was not against diplomatic normalization, but said that “at times during that period, human rights were downplayed more than we felt appropriate to smooth the path to more normal relations.”

“Dealing with Qaddafi’s Libya was never easy,” he said. “The judgment was made that Libyans did not react well to public pressure. I think in retrospect that was a misjudgment.”

A U.S. embassy cable from 2008 noted the disappointment of “a number of Libyans” that the United States did not “more publicly and directly urge greater respect for human rights” immediately after diplomatic relations were re-established.

“Absent a clear message that engagement on human rights will be a necessary adjunct of an expanded U.S.-Libya relationship, meaningful progress in this area is unlikely,” read the cable, which was released as part of the WikiLeaks cache.

American oil companies eager to tap Libya’s oil reserves had also put pressure on the U.S. to normalize its relations with the country. David Goldwyn, a longtime State Department official and then head of the U.S.-Libya Business Association -- a trade group founded by oil companies -- told Bloomberg in 2007 that American companies were losing business because the U.S. wasn’t courting the country as aggressively as other European countries were. Goldwyn currently works as the State Department’s Coordinator for International Energy Affairs. His official bio lists that he was president of his own energy consulting firm, but does not mention his work with Libya.

The trade group’s website, which happens to be down at the moment, describes it as the “only U.S. trade association focusing on the United States and Libya” and says it was “organized to enhance the US-Libya relationship.” (See the cached version from four days ago.)

We’ve asked the State Department for comment on Goldwyn’s work for the U.S.-Libya Business Group but have not yet received a response. The White House said on Tuesday that it was “looking at” a proposal by Sen. John Kerry to re-impose sanctions on Libya.

Inform our investigations: Do you have information or expertise relevant to this story? Help us and journalists around the country by sharing your stories and experiences.