If the GOP wants to fight him on DOMA, they'll have to do it in court, where logic outweighs emotion 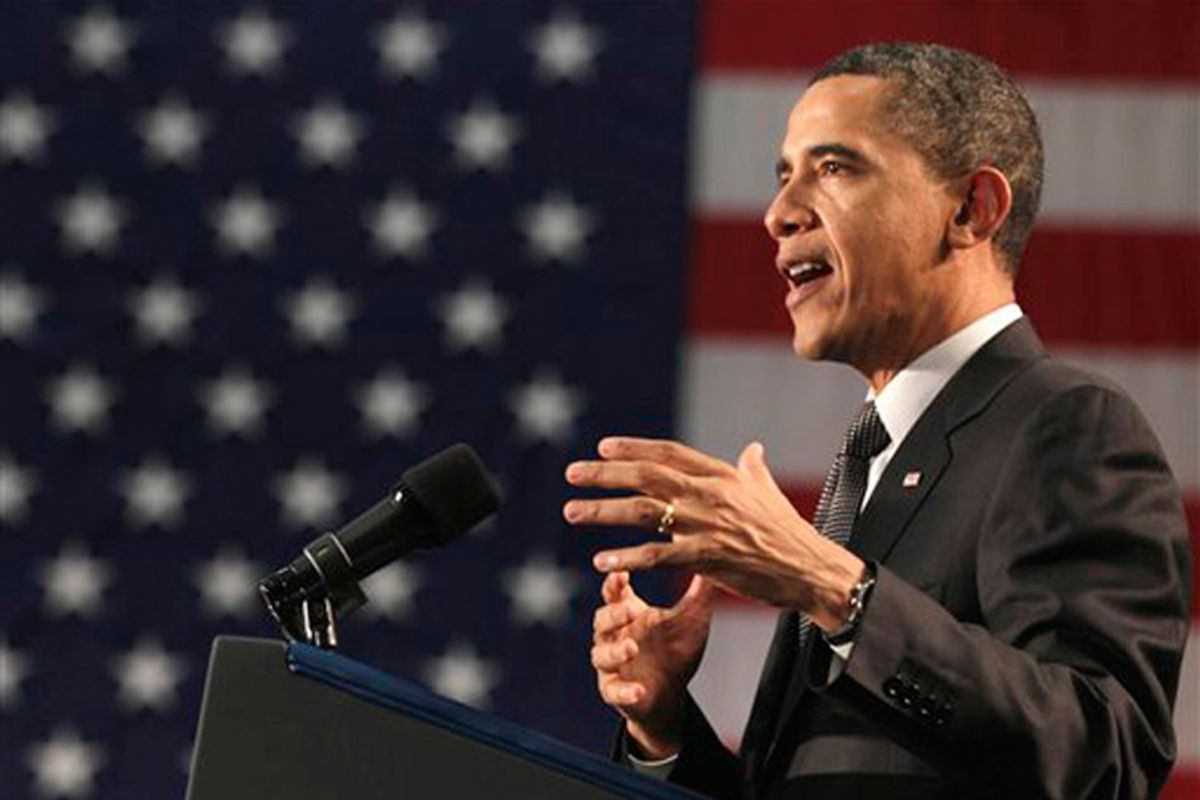 As required by federal law, the Department of Justice has informed the speaker of the House of Representatives that it will not defend Section 3 of the federal Defense of Marriage Act -- which limits federal marriage benefits to unions of members of the opposite sex -- in two cases pending before the New York and Connecticut federal courts.

By all conventional analysis, this decision by the Obama administration represents a risky and courageous act. Although the numbers have been steadily ticking upward, a majority of Americans have never polled in favor of same sex marriage. And according to Pew, nearly 70 percent of white Republicans -- which is to say, almost all Republicans -- oppose it. Thus, the Republicans who run Congress may now be tempted to follow the administration's subtle suggestion in its Wednesday announcement that Congress should act to defend DOMA in court itself if it disagrees with this move.

That would be a mistake. True, the latest Pew poll shows that 48 percent of Americans oppose same sex marriage, while only 42 percent favor it. Defending the exclusionary law in court, however, is something very different from braying about it on talk radio.

The defenders of California’s Proposition 8, who rushed in when that state's governor and attorney general refused the job, learned this lesson in a federal case last year, when their arguments and witnesses were utterly dismantled by the all-star legal team of David Boies and Ted Olson.

When gay marriage foes set out to make their case in that trial, they presented six supposed experts to testify about the harm same sex marriage would cause. But by the time Boies finished taking their depositions, four of the witnesses had withdrawn. (Two of them gave such damaging testimony that Boies and Olson used it at trial against them anyway.) One of the remaining "experts" was ultimately disqualified by Judge Vaughn Walker under the federal rules of evidence and the other was "entitled to little weight," the judge stated.

In the end, the opponents of same sex marriage were reduced to a perfectly circular argument that would not survive a freshman philosophy class, much less law school. They asserted that the meaning of marriage was a union between opposite sexes, then concluded that allowing any other union would destroy the meaning of marriage as they had just defined it. They were forced to employ such twisted logic because there is no empirical evidence to support the exclusion of gays from marriage; the prohibition is the last vestige of the religious belief that homosexuality is sinful, a rare application of the language of the Old Testament to otherwise victimless behavior in a secular society. (One of the hardest things about talking to God is finding an expert to give a proper deposition.)

True, political discourse in America, particularly when it comes to the rights of gays and lesbians, has not always been characterized by the application of perfect logic to empirical data from qualified experts. If House Speaker John Boehner and his fellow Republicans elect to wage a fight for DOMA, they will undoubtedly phrase their announcement in the culture war language that plays so well with their party base.

But then, the Republicans and their lawyers will have to step into federal court and prove -- subject to cross-examination -- how the republic would be damaged if same sex spouses can get, say, federal railroad retirement benefits. As Boies said after dismantling that disqualified expert in the Proposition 8 trial, "the witness stand is a very lonely place."

Moreover, the gay marriage opponents during that Proposition 8 trial didn’t just look dumb -- they looked mean. Homophobic campaign ads looked very different when they were played in a building devoted to equal justice than they did when they appeared on niche cable channels. The congressional record from the original DOMA debate in 1996 is filled with assertions about immorality and sinfulness that were acceptable in polite company back then (perhaps), but that will sound very different today.

As Republican House members contemplate stepping in to defend the Defense of Marriage Act, they might want to consider all of these negatives. Oh, and that poll showing how many Republicans oppose gay marriage? In the 2010 election, the issue polled at dead last among voters' concerns.