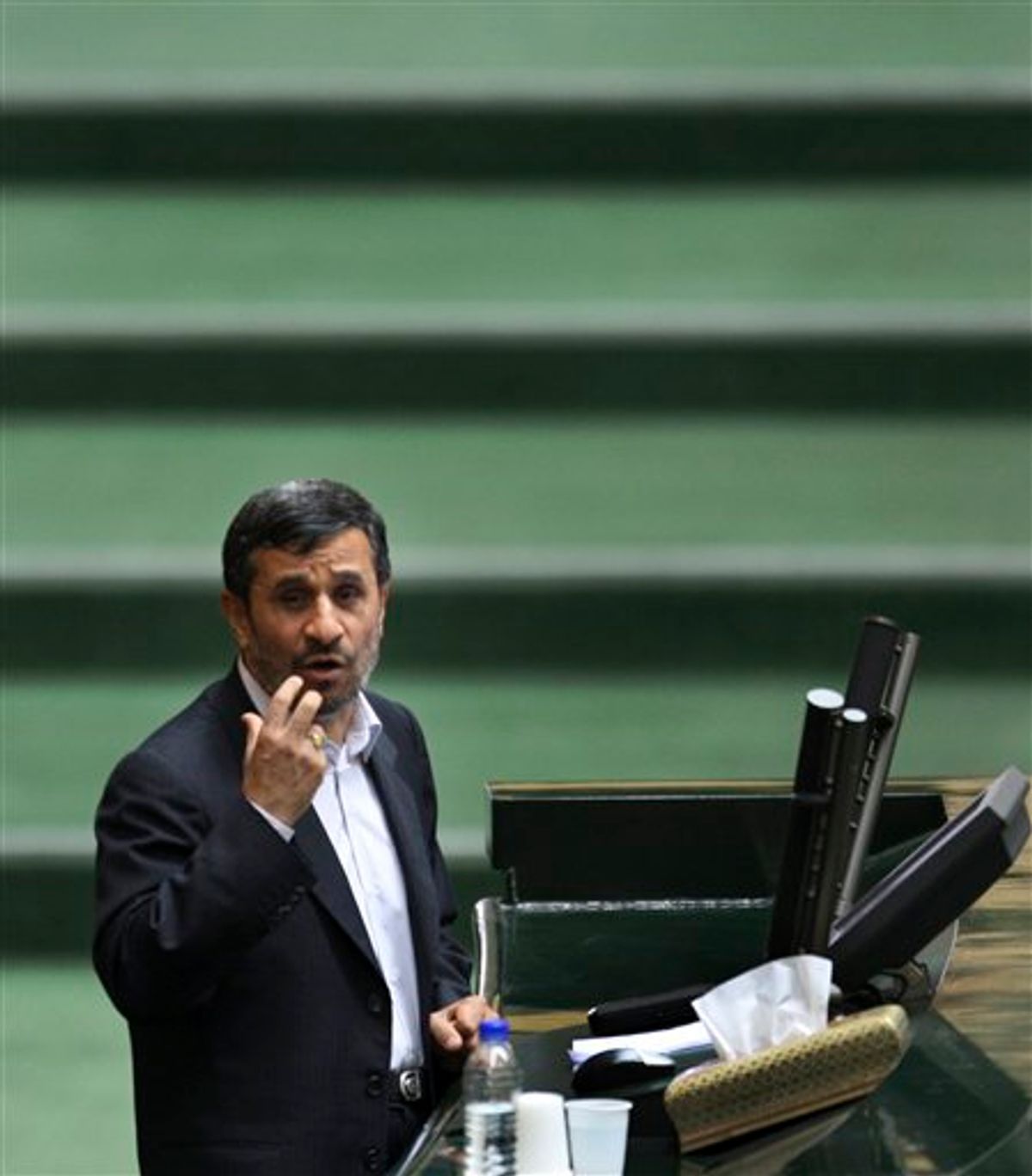 Iranian President Mahmoud Ahmadinejad delivers his speech during the debate for a vote of confidence in Ahmadinejad's choice for new Foreign Minister, who is Head of Iran's Atomic Energy Organization, Ali Akbar Salehi, during an open session of parliament, in Tehran, Iran, Sunday, Jan. 30, 2011. Iran's lawmakers approved Ahmadinejad's choice of Salehi for foreign minister, indicating the importance that the country's nuclear program has for its international diplomacy. (AP Photo/Vahid Salemi) (AP)
--

Iran is expanding its covert global search for the uranium it needs for its nuclear activities and a key focus is Zimbabwe, says a new intelligence report acquired Tuesday by The Associated Press.

The report is in line with international assessments that Iran's domestic supplies cannot sustain its nuclear program that could be turned toward making weapons.

An intelligence report from a member country of the International Atomic Energy Agency -- shared with the AP by an official from that nation -- says Iranian Foreign Minister Ali Akbar Salehi met secretly last month with senior Zimbabwean mining officials "to resume negotiations ... for the benefit of Iran's uranium procurement plan."

"This follows work carried out by Iranian engineers to map out uranium deposits in Africa and assess the amount of uranium they contain," said the two-page intelligence summary.

The report -- confirmed independently by an official from another IAEA country -- was shared as an Iranian delegation led by the head of the Cooperative Ministry Abbas Johari was meeting Thursday with "agriculture and mining interests" in the Zimbabwean capital Harare.

The official confirming the intelligence described the Salehi visit as part of an international Iranian effort that stretches across Africa, Asia and South America and may involve more than a dozen countries. Both officials -- whose countries closely follow Iran's nuclear program -- asked for anonymity in exchange for discussing intelligence matters.

The assessments are important because they call into question recent Iranian assertions meant to dispel doubts about the country's capability to sustain and expand its uranium enrichment program.

Iran says it is enriching solely to power a future network of nuclear reactors. But it has been targeted by U.N. sanctions because enrichment can also create fissile warhead material -- and because of its nuclear secrecy and refusal to cooperate with IAEA probes into its activities.

The assessments come days ahead of the latest IAEA report on Iran, which has been under nearly a decade of international nuclear perusal over concerns it might seek to develop nuclear arms.

Diplomats said Thursday that report may contain an index listing experiments the agency suspects Iran conducted as part of work on a nuclear weapons program. The alleged experiments have been known for years, but republication would show the agency's impatience with Iran's prolonged refusal to cooperate with its investigation.

Tehran still has hundreds of tons of uranium hexafluoride -- the gas derived from ore that is spun by centrifuges into the enriched uranium that can be used as reactor fuel and to arm nuclear missiles. But both Western intelligence agencies and IAEA officials say that it does not seem to have meaningful domestic supplies of the ore itself. That means that Iran's enrichment efforts would ultimately have to be curtailed unless new domestic or foreign supplies are secured.

Tehran denies any shortages. Because U.N. sanctions ban countries from selling Iran any nuclear material, it is publicly focusing on searching and exploiting possible domestic supplies at its only operating mine near Bandar Abbas and at a site at Saghand, both in southern Iran. Salehi in December said it had started uranium ore processing for the first time from domestic production instead of using supplies it imported decades ago.

Still -- despite asserting it has plentiful ore reserves at Saghand -- there have been no attempts to exploit the site, because of what officials say is a lack of money.

With the completion date of any Iranian nuclear reactor network decades away, Tehran may have pressing reasons to look for replenishable ore supplies, said Fitzpatrick, now head of nonproliferation for the London-based International Institute for Strategic Studies.

Iran, he said, now has enough uranium gas to make 20 or 30 nuclear weapons, should it choose to turn what it says is a peaceful program into making such arms. If that supply were destroyed by a military attack or sabotage, "that could put a serious crimp into Iran's ability to reconstitute the program."

"That's why for strategic reasons its not surprising that Iran is continuing to try to acquire additional sources," he added.

Many of the world's uranium producers -- or countries with large reserves -- are in Africa. And while some, like South Africa, observe U.N. sanctions slapped on Iran in efforts to crimp its enrichment programs, there are doubts about more reclusive countries.

The intelligence summary said "part of Iran's plan is to gain a foothold in Zimbabwe and other African countries such as Congo, Nigeria (and) Senegal." The official who provided the summary said Salehi also visited Senegal in mid-January, apparently to patch up tensions created by allegations that Iran was supporting Senegalese separatists with weapons.

Other officials familiar with Iran-Zimbabwe relations said that Iranian President Mahmoud Ahmadinejad and others had expressed interest in Zimbabwe's uranium supplies several times since April, when Ahmadinejad visited Harare. But they said that action has been stalled by the problem of how to exploit the reserves.

Because the uranium ore is not near existing mining operations, large-scale extraction would draw international attention because it could not be covered up as expansion of existing platinum or other mining projects, they said, also asking for anonymity because their information was privileged.

Large uranium deposits were first found decades ago in the Kanyemba district nearly 250 kilometers (almost 150 miles) north of the capital, Harare, but were left unmined because of low prices. The site has an estimated 450,000 tons of uranium ore that would produce 20,000 tons of enrichable uranium.

Zimbabwean President Robert Mugabe denied news reports after Ahmadinejad's April visit that the Iranians had secured mining rights for his country's uranium but his office said Iran had a right to apply for them.

U.S. officials would not specifically confirm the Zimbabwe connection but did not refute it in comments warning against violating U.N. Security Council resolutions on Iran.

"We know Iran is looking for countries that might be prepared to violate the UNSC resolution to address its uranium shortage," said U.S. National Security Council spokesman Tommy Vietor. "We urge all countries to abide by their international commitments."