Are we ready for a Libyan oil shock?

Get ready for more GOP attacks on Obama's energy policy: Gas pump prices are rising, and the Mideast is to blame 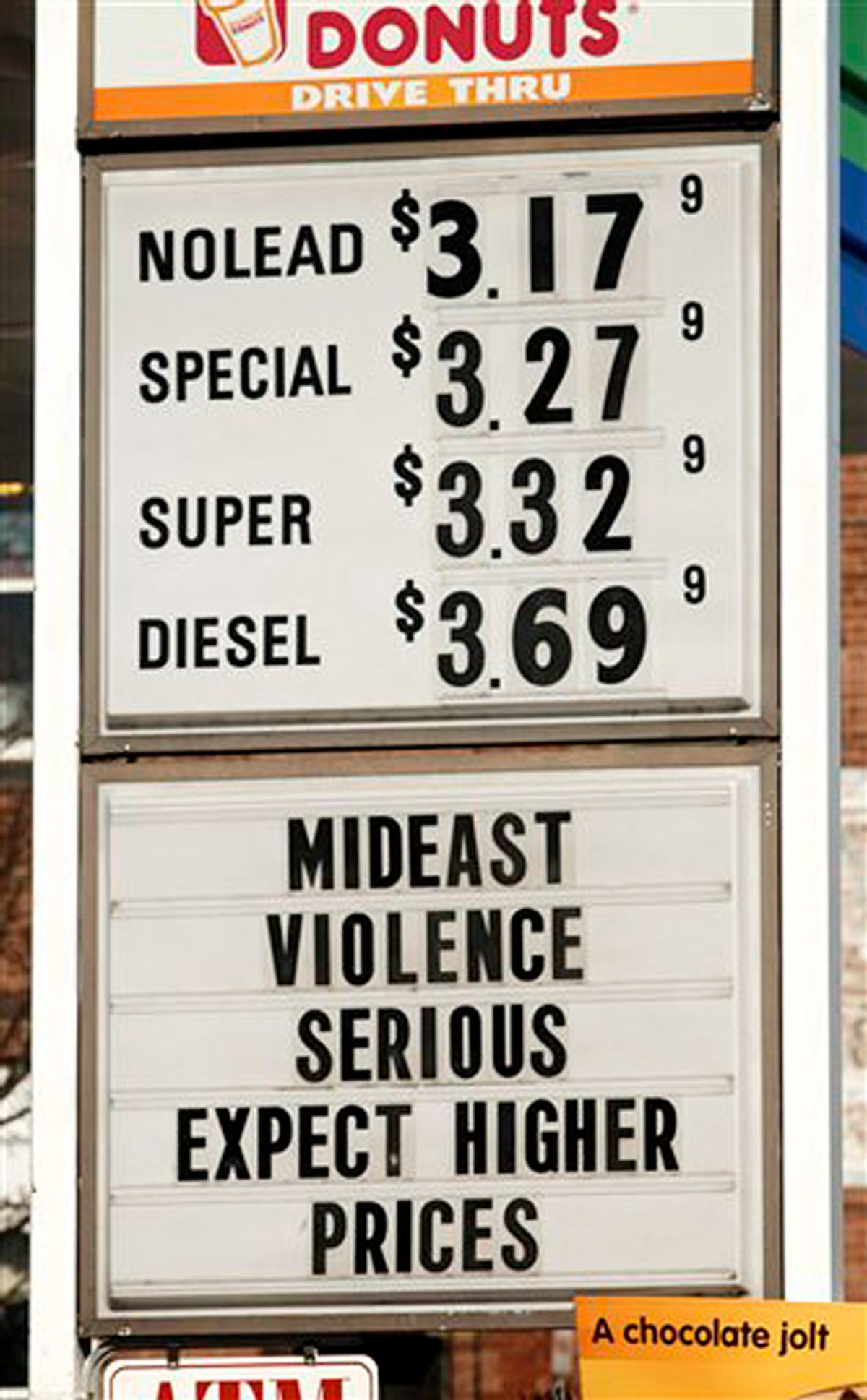 A sign advertises gas and diesel prices, plus gives an explanation to customers, at a service station in Easthampton, Mass, Wednesday, Feb. 23, 2011. Oil prices rose past $99 a barrel on Wednesday as forces loyal to Libya's Moammar Gadhafi clashed with protesters expanding their control over parts of the country. (AP Photo/ Shana Sureck) (Shana Sureck)
--

Could civil war in Libya crush the U.S. economic recovery? At one point Thursday morning, the price of crude oil traded on the New York Mercantile Exchange at $103.41 a barrel, the highest mark since September 2008. Just about everyone is blaming events in Libya, a country responsible for producing about 2 percent of the world's oil.

A handy economist's rule of thumb holds that for every ten dollar rise in the price of a barrel a crude, we can shave about half a percentage point off of GDP growth. In normal economic times, spread over a long enough period of time, that would amount to nothing more than a mild head wind. When economies are growing steadily, a gradually increasing price of oil isn't a huge problem. The White House is complacent; speaking for the Obama administration, economist Austan Goolsbee said "we're not forecasting... that at these levels they would derail the recovery."

But these aren't normal times. Goldman Sachs warned on Wednesday that Republican budget cuts could depress growth by anywhere from 1.5 to 2 percentage points this year. The price of crude has jumped ten dollars since December and if it keeps surging at an accelerated clip, the headwind suddenly becomes a rip tide. And while, Libya, by itself, is too small a player to incite a serious oil shock, the paramount question is how far the Mideast democracy movement spreads. Algeria -- responsible for another 2.5 percent of world oil production -- might be the next domino to fall. On Wednesday, in a blatantattempt to stave off any organized popular discontent, Saudi Arabi's King Abdullah announced a package of $37 billion in benefits for the kingdom's 18 million inhabitants.

Throw into the mix the steadily increasing demand for oil by the usual emerging economy suspects, and you end up with a scenario in which it would be foolish to discount the possibility of a real oil shock, far beyond anything that we've seen in the last month.

The political jockeying has already begun. House Speaker John Boehner's official blog has already resuscitated the all-too-familiar GOP talking points trotted out whenever concern about gas prices prices threatens to gain traction with the general public -- the dangers of offshore oil restrictions, Environmental Protection Agency regulations and "green stimulus" spending. Remember -- rising oil prices gave John McCain one of his few really successful opportunities to bash Obama on policy grounds, and the political heat is sure to ramp up with each new surge above the $100 a barrel mark.