In cash we trust, but unions we bust

Scott Walker zeroes in on the real enemies of the common man: Teachers, nurses and the guys who drive snowplows 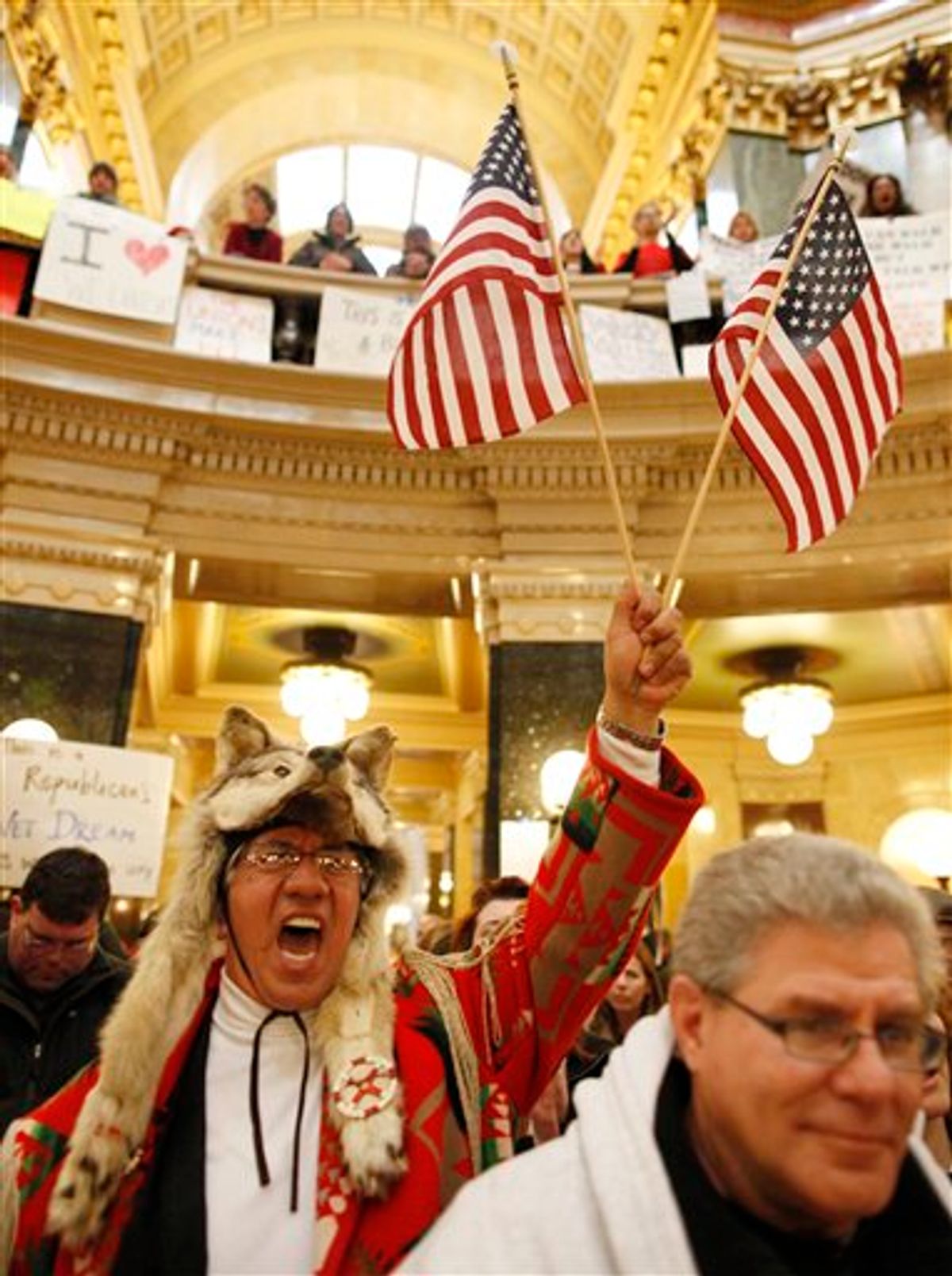 Recent events in Washington and Wisconsin have me thinking that maybe we should just go ahead and change the national motto to something more truly reflective of today's America. Forget "e pluribus unum" with its elitist overtones. Also, what people who make a big thing over "In God We Trust" really mean isn't so much that they approve of the deity, as that God approves of them.

Think about it. In Washington, GOP Speaker John Boehner, asked about the near-certain loss of several hundred thousand jobs should severe Republican budget cuts go through, responded, "So be it."

This in the immediate aftermath of extending the Bush administration's tax cuts for millionaires that basically created the national debt his party now pretends to be so concerned about. Previous to 2009, not so much.

"We're broke," Boehner elaborated, although the stock market's now soaring, the bailed-out Wall Street investment banks, whose reckless gambling sent the world economy into a near-death spiral, are doling out billions in bonuses to insiders, while American corporations are sitting on a growing mountain of cash, and while unemployment remains above 9 percent even as some companies openly refuse to consider hiring anybody who hasn't already got a job.

But, oh no, we can't raise marginal tax rates a lousy 4.6 percent on incomes above $250,000. Perish the thought. Never mind that the past 30 years have seen the wealthiest 1 percent of Americans increase their share of the national wealth from 7 percent to approximately 23 percent. Nor that, according to a study by the Economic Policy Institute, corporate CEOs who made 24 times more than a typical worker in 1965 now earn about 275 times more than the guys in the shop. Assuming the shop hasn't closed down and moved to Thailand, that is.

But heaven forbid we bring back Clinton-era tax rates. Instead, let's stimulate the economy by putting a few hundred thousand federal employees on the street. That'll work.

"There's class warfare, all right," Warren Buffett, the multibillionaire investor told the New York Times in 2006, "but it's my class, the rich class, that's making war, and we're winning."

Meanwhile, in Wisconsin, a brand-new Republican governor largely financed by the infamous Koch brothers, the Scrooge McDuck type of billionaire, has identified even more sinister enemies of the common man: schoolteachers, nurses and the guys who drive snowplows.

Gov. Scott Walker, an Eagle Scout and career politician, came into office spouting the usual Tea Party humbug: lower taxes, fiscal restraint. Then he pulled a bait and switch worthy of the cheesiest kind of used car dealer. First, he persuaded the Republican-controlled Legislature to pass $140 million in corporate tax cuts. Then he announced a $137 million budget deficit that could only be closed by making public employees pay a substantially higher share -- as much as 12 percent of their salaries -- for their healthcare and pensions.

Indeed, the unions all but formally accepted the new governor's terms. It'd be tough, but Wisconsin's union members tend to be a public-spirited lot. Although the state's budgetary woes are almost entirely the result of decreased revenues and increased expenses caused by the national economic recession, workers were willing to do their bit.

Negotiating, however, wasn't what Gov. Walker had in mind. His goal was union busting. Refusing to meet with union representatives, he proposed a bill basically abolishing the collective-bargaining rights of public employees first established in 1959. He preemptively threatened to call out the National Guard if union members didn't like it. There would be no compromises and no negotiation.

Interestingly, Walker's union-killing bill contains an unrelated clause allowing him to sell "state-owned heating, cooling and power plants," without competitive bidding for any price the governor deems reasonable. It's certainly reasonable to wonder if Koch Industries, which bankrolls Americans for Prosperity, which in turn bankrolled Walker's campaign, will be interested.

"He campaigned on this," wrote Washington Post columnist George Will. His little heart going pitty-pat for this latest right-wing heartthrob, Will compared Walker to such conservative foes of organized labor as Ronald Reagan and Margaret Thatcher.

Except, no, Walker didn't run on decertifying public employee unions during his 2010 campaign. Moreover, he'd probably never have been elected governor if he had. A poll commissioned by the AFL-CIO found that even with partisan passions fully engaged, less than one-third of Wisconsinites favor abolishing public employees' right to collective bargaining -- particularly not, one imagines, in so peremptory and dishonest a manner.