So this is John McCain's reward 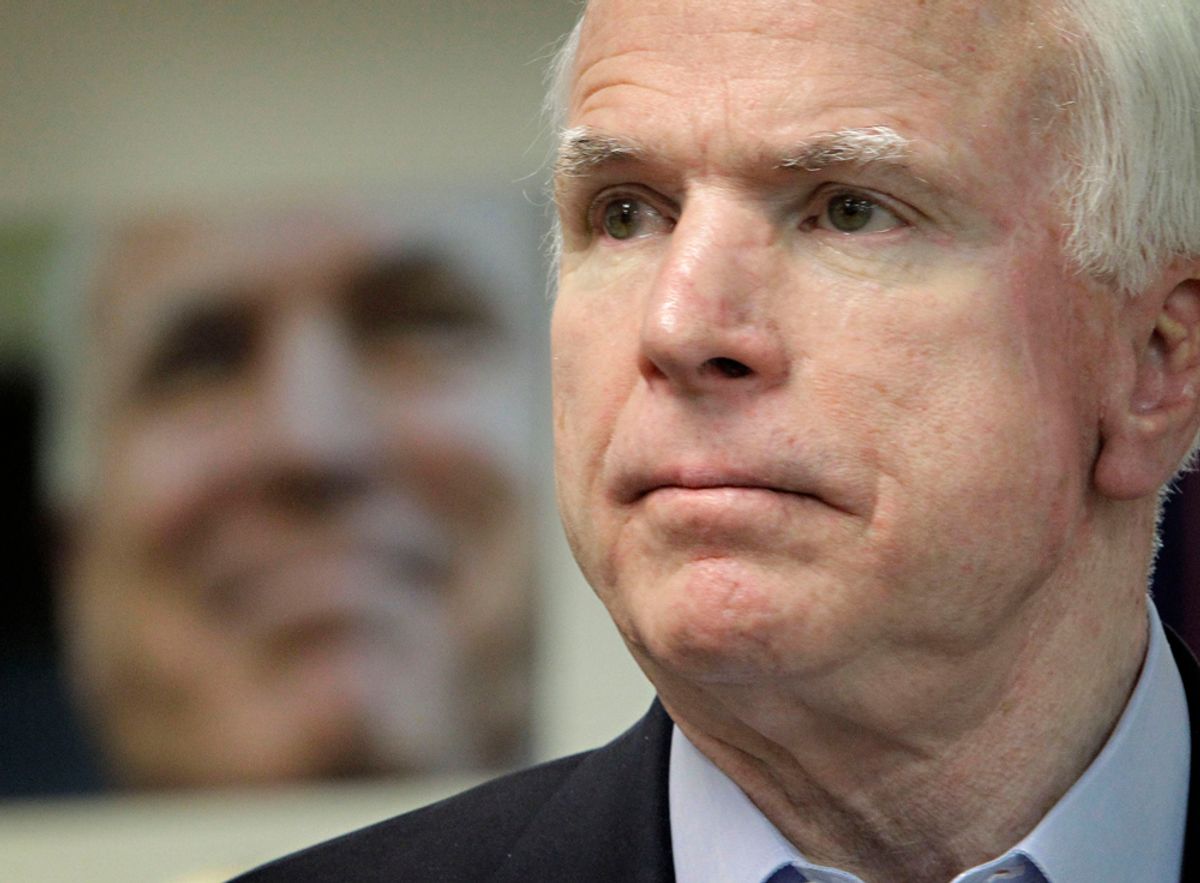 The man who once voted against George W. Bush's tax cuts for the wealthy, teamed up with Chuck Schumer on gun legislation, demanded that patients be given wide latitude to sue health insurers,  and called Jerry Falwell and Pat Robertson "agents of intolerance" has just been crowned ... the most conservative member of the United States Senate.

In a way, of course, this was inevitable. McCain's transformation from every Democrat's favorite Republican to reflexively anti-Obama ideologue has been well-chronicled. Some have argued that McCain is simply returning to his ideological roots; he was elected to Congress as a Goldwater conservative and actually voted against the Martin Luther King holiday in 1983, after all. Others have noted that he faced an imperative to move sharply to the right in order to survive J.D. Hayworth's primary challenge this past summer.

The reality, as I've noted, is that McCain's ideological shifts over the years seem to track closely with his grudges.

When he began running for president in 2000, don't forget, his issue positions were uniformly conservative, with one exception: campaign finance reform, a crusade that put him at odds with some of the most powerful forces on the right, who rallied behind George W. Bush. The issue itself meant little to most voters, but the heat that it generated from the right signaled partisan and ideological disloyalty to the party base -- and prompted Democrats to see McCain as refreshingly principled.

When the campaign ended, McCain by all measures felt personally wounded by the Bush campaign's tactics and began drifting toward Bush's Democratic enemies. This was the John McCain who opposed the Bush tax cuts, discovered environmentalism, lobbied for a strong patients' bill of rights, partnered with Schumer, and flirted with switching parties (or waging a Teddy Roosevelt-style independent bid for president in 2004). Not coincidentally, his embrace of all of these new causes made life difficult for the man who'd beaten him in 2000, Bush.

Since the '08 campaign, McCain has treated Obama roughly the same way. It's not just that McCain opposed, say, the stimulus or healthcare reform; it's that he established himself early on as one of the administration's loudest, harshest and most unrelenting critics. And this posture continued long after McCain crushed Hayworth in last August's primary -- remember how bitterly McCain resisted efforts to end the "don't ask, don't tell" policy all the way through December, when it was finally (and barely) voted down by the Senate? McCain's transformation has clearly been about more than shoring up his standing on the right to avoid primary challenges.

The more interesting question is what this will mean for his legacy. As James Fallows noted in December, when McCain was fighting DADT repeal with all his might:

I have been trying to think of a comparable senior public figure who, in the later stages of his or her career, narrowed rather than broadened his view of the world and his appeals to history's judgment. I'm sure there are plenty (on two minutes' reflection, I'll start with Henry Ford and Charles Lindbergh), but the examples that immediately come to mind go the other way.