Will the Tea Parties rise up against gay rights?

Polls show a movement of people with very conservative social views, and Fox is already telling them to get mad 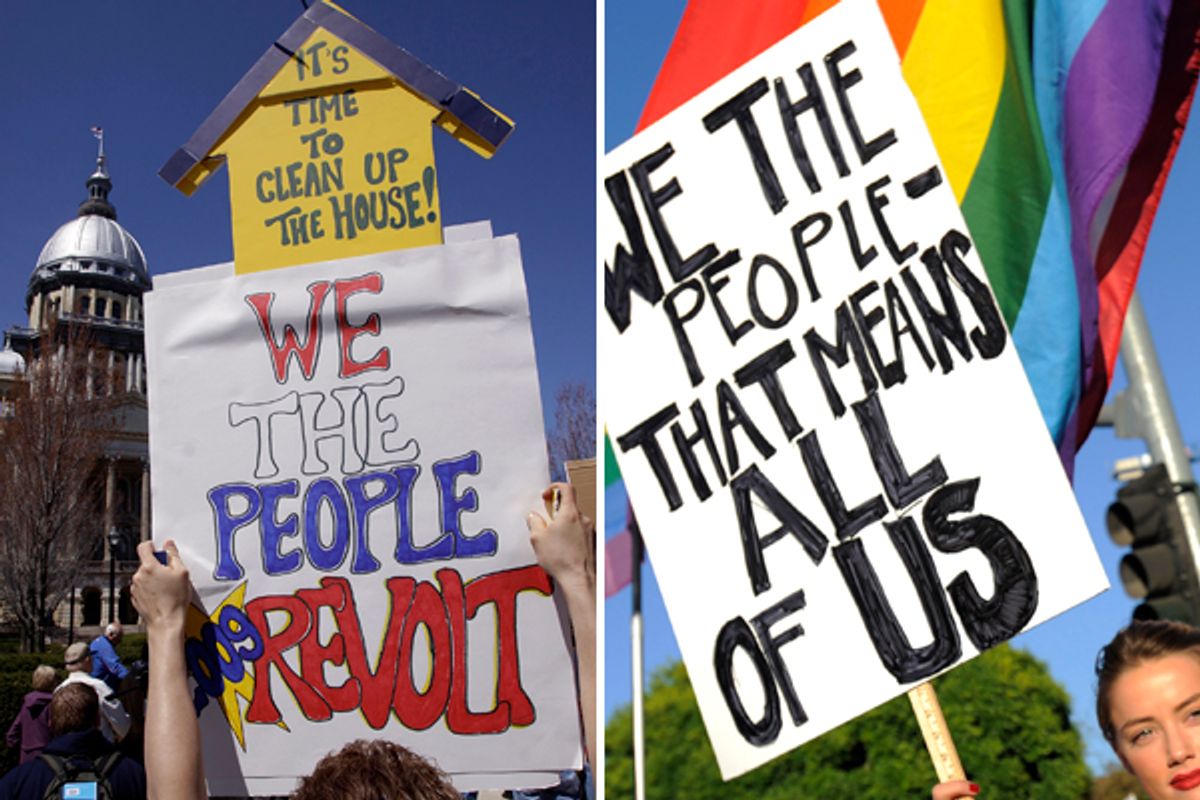 A Tea Party rally at the Illinois state Capitol in Springfield, Ill., in April 2009. Right: A supporter of gay marriage in West Hollywood, Calif., in August 2010.
--

With Barack Obama's Justice Department declining to defend the major portion of the Defense of Marriage Act against suits challenging its constitutionality, the "culture wars" should be reaching another overheated peak by week's end. (And not a second too soon! Politico just announced that the Washington media class has "revolution fatigue." Well, they said the "West Wing" is sick of caring about the outside world, but they meant themselves. Sorry, Libya -- Mike Allen's bored!)

I never tire of debunking the argument that the Tea Parties are a libertarian or even "independent" phenomenon, and the forthcoming response to the president's move toward acknowledging the civil rights of LGBT citizens ought to supply me with plenty of material.

Tea Partyers, according to yet another recent poll, are conservative Republicans. They are social conservatives and whatever the other kind of conservative is, too. (Upward redistributionist conservatives, I think.) Conservative Republicans are a demographically shrinking minority, so they needed to rebrand themselves as independents, which they more or less succeeded at. And once they get into power, as they have shown in the last month, they attempt to smash unions, ban abortion, redefine rape in order to make it more difficult to safely get an abortion, take a hatchet to women's reproductive health access in general, pass increasingly onerous and insane laws punishing undocumented migrants and those suspected of being undocumented migrants, propose unconstitutional legislation designed to combat birthright citizenship (the practical result of which would be to vastly increase the number of "illegal immmigrants" in the country), name a national gun of Arizona shortly after a deadly mass shooting, and otherwise do and say things that horrify and alarm reasonable Americans. (Television and Internet to the contrary, bilious pools of screeching resentment made pathetically animate still make up a minority of the nation's population.)

The typical political column argument about "overreach" is concern-trolling, masking the fear that the "other side" will actually accomplish its political goals. You know, like those articles from Republicans about how Obama promised to be a centrist and then overreached. But Obama's first-year domestic agenda, while broadly progressive, was made up primarily of things he explicitly promised to do, and little of it was even particularly controversial or unpopular until it was demagogued by the right. Most of the new crop of Republicans promised, broadly, a "common sense" return to "constitutional values" or whatever -- the vagueness was an essential part of the sell -- and not the rejection of the 14th Amendment and mandatory gun-ownership laws.

So Tea Partyers are conservative Republicans and conservative Republicans watch Fox and on Fox yesterday Megyn Kelly already told everyone that not defending DOMA means Obama is a dictator. For more, they turned to anti-gay menace Maggie Gallagher, who, in her column yesterday, announced that the forces of Gay Socialism would not stop until they legalize polygamous cross-dressing coed bathroom marriages for everyone. She closed with a Patrick Henry quote, because she demands liberty from gay people or, I guess, death.

The groups organizing the show don't care to fight this particular battle -- Mitch Daniels wanted that truce and I'm sure the Kochs couldn't care less whom you fall in love with -- but they raised an army of resentful ultra-conservative old people, and that army will go where their anger takes them.