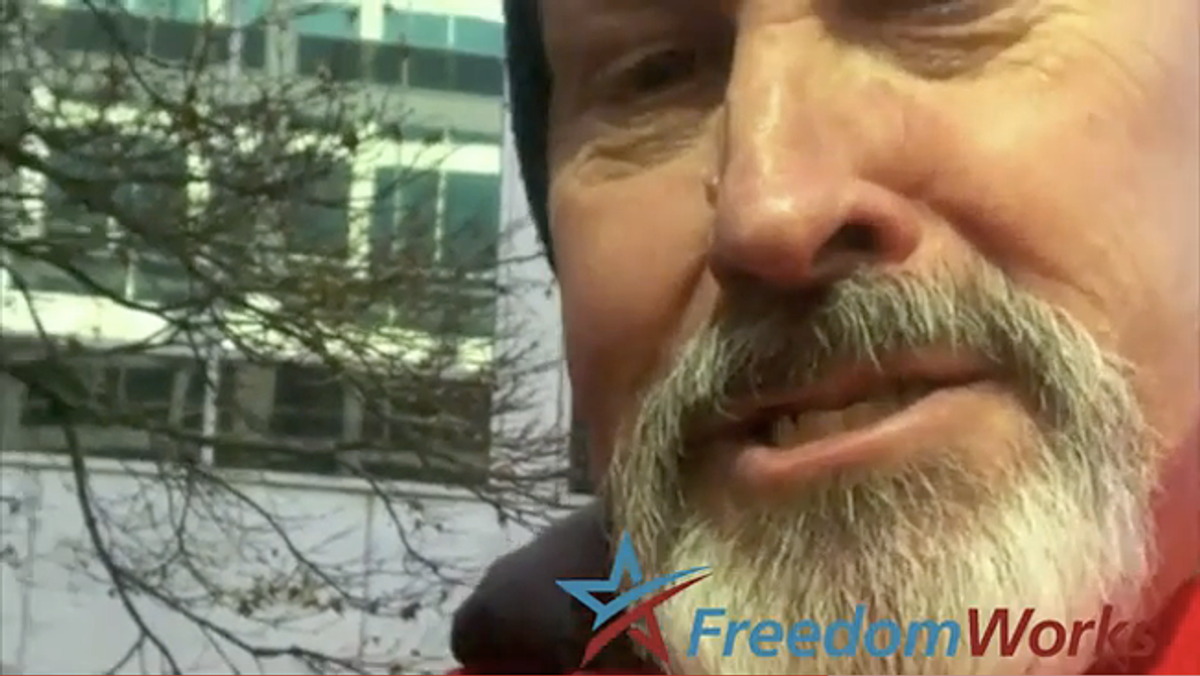 In the parallel media universe of the right-wing blogosphere, this is the single biggest story of the week. Maybe the month, even. A union thug viciously attacked an innocent young woman, in broad daylight. And it's all on camera!

Or, like, a guy pushed a camera that was 6 inches from his face, wielded by someone engaging him in a heated argument. You be the judge!

You'll note that the perpetrator isn't a striking Wisconsin public employee. FreedomWorks could only manage to provoke an incident in D.C., because the people of Wisconsin are a gentle and peaceful lot, unless there is a Packers game on.

Let me be clear: I abhor shoving of any kind. Shoving is never justified. The world would be a better place if there was no shoving, by anyone. Make loves, not shoves. But -- and I could be wrong here -- the gentleman's actions seem to be aimed at the lens of the video camera, and not intended to cause harm to the person holding it. Pushing a camera away from one's face seems less "thuggish" to me than it does ... defensive. And purposefully picking fights with people in order to provoke an angry response does not really prove much of anything.

None of that matters, of course. What matters is that everyone on the right was simply waiting for one of their content suppliers to produce the requisite "violence from a union thug" video, and here it is. The scripts were all written in advance. Now everyone has jumped on the story: Because these people are completely fucking shameless, the woman from the video has compared herself to Lara Logan. I am not making that up. I wish I was making that up. But I would actually not make that up, because it would seem beyond the pale to accuse conservative activists of being so horrible, so desperate to play the victim, so morally depraved, so deep into their persecution fantasies that they've lost all perspective on the rest of the world.

This is the height of the conservative movement's pathological projection: Whatever they are accused of being or doing, the LEFT is the TRULY GUILTY PARTY. (This is the "liberals are the REAL racists" line, which is more of a comforting mantra than a compelling argument.) And now we've reached the point in that delusion where, if something bad happens to a leftist (and any member of the MSM is a default socialist), even if no one anywhere said it had anything to do with conservatives, it has to be demonstrated that the left does it too, and does it worse, and that conservatives are the true victims.