"30 Rock" takes on feminist hypocrisy -- and its own 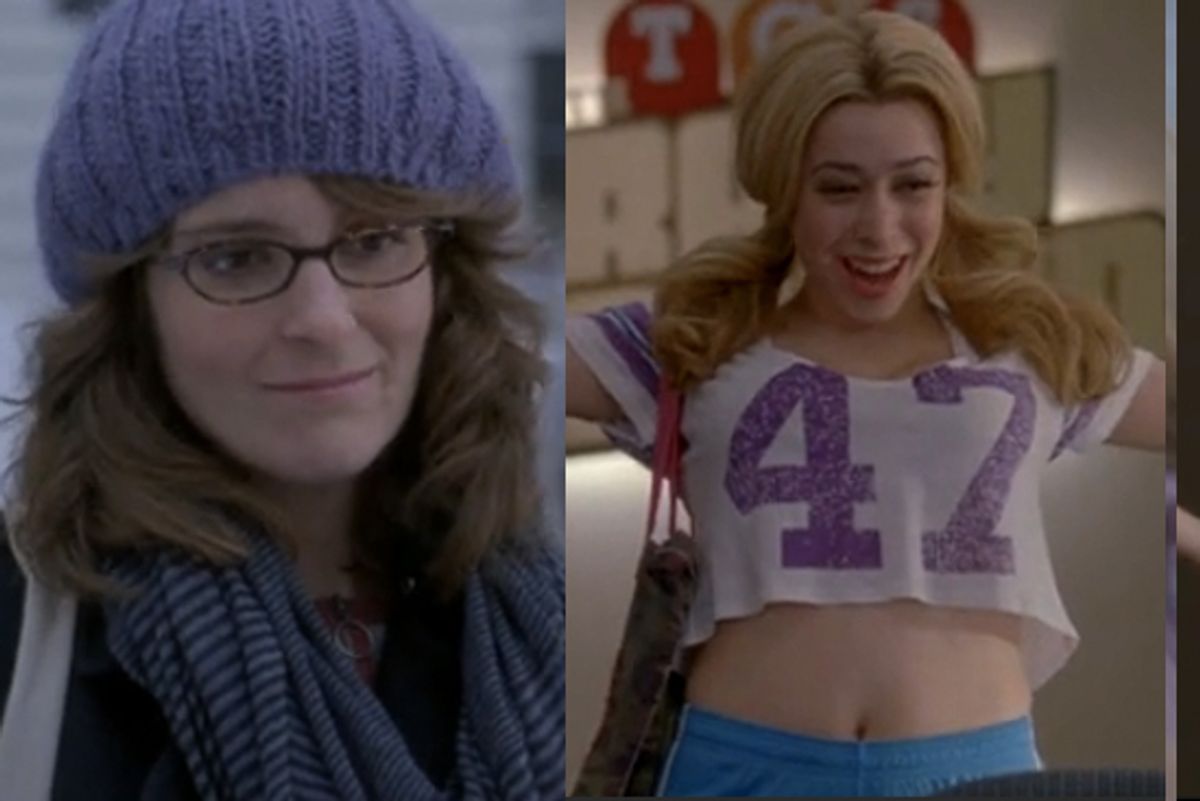 Last night on NBC's "30 Rock," Tina Fey and company dove head first into the mud-wrestling match that is the ongoing conversation about women in contemporary comedy. The show took particular interest in the recent kerfuffle that erupted when unofficially-feminist-but-totally-feminist women's pop-culture website Jezebel took on the beloved "Daily Show" for not featuring enough women as on-air talent or in the writers room, and for its hiring of lissome-but-arguably-not-hilarious Olivia Munn as a token female cast-member. The episode was a direct entrance into the controversy that has lately swirled not only around Munn and "The Daily Show" but also around Fey and her "30 Rock" protagonist Liz Lemon: the one about the very combustible relationship between women, comedy and feminism.

The show begins when a website called JoanOfSnark.com takes "30 Rock's" meta-show "TGS" and particularly Fey's meta-character Liz Lemon to task for not employing enough women. In response, Liz hires Abby Flynn (Cristin Milioti), a pneumatic, infantilized, thumb-sucking trampoline jumper whose character was both an obvious reference to Munn (who took a girlish hop on the old trampoline for a Maxim shoot) and, to my eye, an even more devastating take on the pigtailed creepy-sex-object shtick of Sarah Silverman, two hot real-life funny women often credited by male critics for their comedic talent while those women who don't make their sexuality the most salient part of their personae get ignored or dismissed.

When Lemon actually gets a load of Abby, and notes the way she plays to men for approval, she tries to "help" her by explaining, in front of a statue of Eleanor Roosevelt, that she doesn't have to put on a baby voice and do her hair like a little girl in order to be valued. Abby retorts that her voice is not fake, and that "the whole sexy baby thing isn't an act ... I'm a very sexy baby!" More pointedly, Abby questions Liz's claim that she's trying to help her: "Really? By judging me on my appearance and the way I talk?" and wonders how her infantilized appearance is any different from Liz wearing glasses to convey that she's smart.

Mesmerizingly, practically the whole half hour of network television was dedicated to slicing and dicing nearly every angle of the arguments that crop up any time anyone tries to talk about gender, popularity and perception. It was a testament to the fact that these arguments have been cropping up ever more frequently in recent years, thanks in no small part to the ascension of Fey and her generation of talented (and very often beautiful) comedians, as well as the rise of a critical and popular feminist-minded blogosphere that keeps a celebratory and often cutting eye on the gender history being made in media, politics and entertainment.

Yes, the episode took a couple of digs at Jezebel -- a site whose success has offered one of the best examples of the heretofore dubious possibility that feminism, politics and high culture could effectively be mixed with pop culture, comedy and low culture -- with Liz pointing out that it was "this really cool feminist website where women talk about how far we've come and which celebrities have the worst beach bodies" before hooting: "Ruth Bader Ginsburg!"

But the very fact that an NBC sitcom would revolve a plot around the commentary coming from a lady-minded website seems to me to be a warm tribute to that website's clout in the landscape of cultural criticism. At least one person at Jezebel agrees. Irin Carmon, the reporter whose work on Munn and "The Daily Show" was most directly parodied in last night's episode, told me, "We're honored, of course. It's fitting that this most meta of shows would tackle the contradictions and tensions of the whole 'women in comedy' conversation – and more broadly how women struggle with the external representation of our sexuality. Also, Nick Denton would never let us put a womyn sign on the homepage."

Indeed, one of the finest site gags was the design of the JoanOfSnark.com site, which looked very much like Jezebel, with the "o" made into a "womyn sign" and the site tag line, "Perhaps correct. Definitely exhausting."

As someone who has frequently weighed in on the topics being parsed last night on NBC, and who believes that public wrestling with questions of women and perception is not only necessary but itself a sign of progress, I could also not agree more with this nifty summation of how the process often feels. People coming at it -- often from contradictory angles -- are often correct. And the sparring is often exhausting. Last night, it happened also to be hilarious.

What Fey is good at is peeing all over sacred (or at least earnest) cows at the same time that she's polishing them up and offering them more airtime than they would find anywhere else on network television. (Remember the episode from some seasons ago in which Fey's Lemon lets down her feminist comedy writer idol with her unwillingness to tell a risky political joke in the same episode that Alec Baldwin's Jack Donaghy imitates a series of African-American male characters in one of the more racially electric skits on television since the demise of "Chappelle's Show.")

Last night, Fey again took feminist piety as her mark (memorably telling Jack, "I support women! I'm like a human bra!") at the same time that she engaged in it herself. At one point, when jealous Jenna (Jane Krakowski) tells Liz she must destroy lollipop-licking competition for male adulation, Liz responds, "No, Jenna, that's exactly the problem: men infantalize women and women tear each other down." No contradictory punch line here. Liz spoke the truth! Or part of it. Other parts included the fact that the JoanOfSnark critique of how women were treated on "TGS" was spot on, as evidenced by the fact that Liz's purportedly female-friendly show had recently showcased Jenna ... as feminist icons Amelia Earhart and Hillary Clinton ... both losing control to menstrual cramps. To meta things up, these bits were followed by (fictional feminist icon) Liz Lemon announcing to her writers' room: "This show started as a show for women starring women. At the very least we should be elevating the way women are perceived in society!" before clutching her midsection and shouting "Oh! My period! You're all fired!" and fainting.

See? The blogofems might be hypocritical, pious and tiresome, but they are also ... correct!

Fey herself has been one of those Joans of Snark she was sending up last night, at least when it comes to being full of contradiction and confusion at the same time that she's genuinely and energetically engaged questions of gender representation in comedy, politics and entertainment. As the first female head writer at (and later guest contributor to) "Saturday Night Live," her skits about and starring women were put under a microscope that revealed two different strains of DNA: the one where she and Amy Poehler made feminism gut-busting at the Weekend Update Desk and "Bitch Is the New Black" got emblazoned on Hillary Clinton-supporting T-shirts, and the one where she made lots of jokes about whores. Fey produced, wrote and starred in "Mean Girls," a feminist movie filled with mixed messages about the innate natures of young women; she has said publicly dismissive and judgmental things about promiscuous women and strippers; she regularly pokes fun at the image of the pathetic single woman as Liz Lemon, and this summer finally ran afoul of some of her most ardent admirers in the blogosphere.

Just a few weeks ago, Fey's upcoming book of essays was excerpted by the New Yorker, one of the magazines currently under scrutiny for its paucity of female bylines. Her roaringly unapologetic feminist piece about the scrutiny, pressure and conflicting responsibilities of working mothers included some deep jabs at Hollywood's relationship to aging women, including her acidic assertion, in reference to a generation of older comedic actresses we never see anymore because they've been labeled crazy, that "the deﬁnition of 'crazy' in show business is a woman who keeps talking even after no one wants to fuck her anymore."

The fact that there is hypocrisy in feminist criticism -- and more maddeningly, that there are knots having to do with beauty, sexuality, comedy, respect, desirability, power and representation that will simply not come cleanly undone no matter how sharp a nail we take to them -- does not mean that the criticism is invalid, or that we should stop worrying the knots, or that our struggles on both fronts should be exempt from mockery.

Jezebel does publish smart feminist content at the same time it publishes snarky items that might appear in more traditional women's magazines. So does Salon. Tina Fey has made huge, feminist strides for women in comedy at the same time that she has made comedy at the expense of women. Such is life when you attempt -- as we all should! -- to bring gender criticism out of the pure ether of sociopolitical discourse and attempt to deploy it in the real, messy world of commerce, consumption and popular culture.

On the show, it turned out that Liz Lemon was correct: Abby's voice and boobs and pigtailed hair had been fake. But Liz's feminist victory was trumped by her feminist fail: the put-on personality had been Abby's attempt to escape a violent and abusive ex-husband, who now knew where she was thanks to Liz's "helpful" meddling. This final twist was ridiculous but made a final needle-sharp point: Different strands of feminism -- or any kind of social activism -- can work in contradiction to each other. Just because there's no one correct answer doesn't mean that the questions are useless or boring; they're interesting enough to plot a sitcom around.

To dig deeply -- and wittily -- into these ultimately unsolvable but real issues, especially with direct tributes to places like Jezebel and more broadly the feminist critique of media powerhouses like Stewart's "Daily Show" or of Fey herself, is to pay them the honor of taking them seriously -- seriously comedically. Last night's episode was Fey's clever, direct admission that she's been paying attention, and that her typically eagle eye has caught the hypocrisy on every side, including her own.