In New Zealand, haunting texts to Mom beg for help

The earthquake in Christchurch leveled a foreign-language school, spreading the tragedy across the world 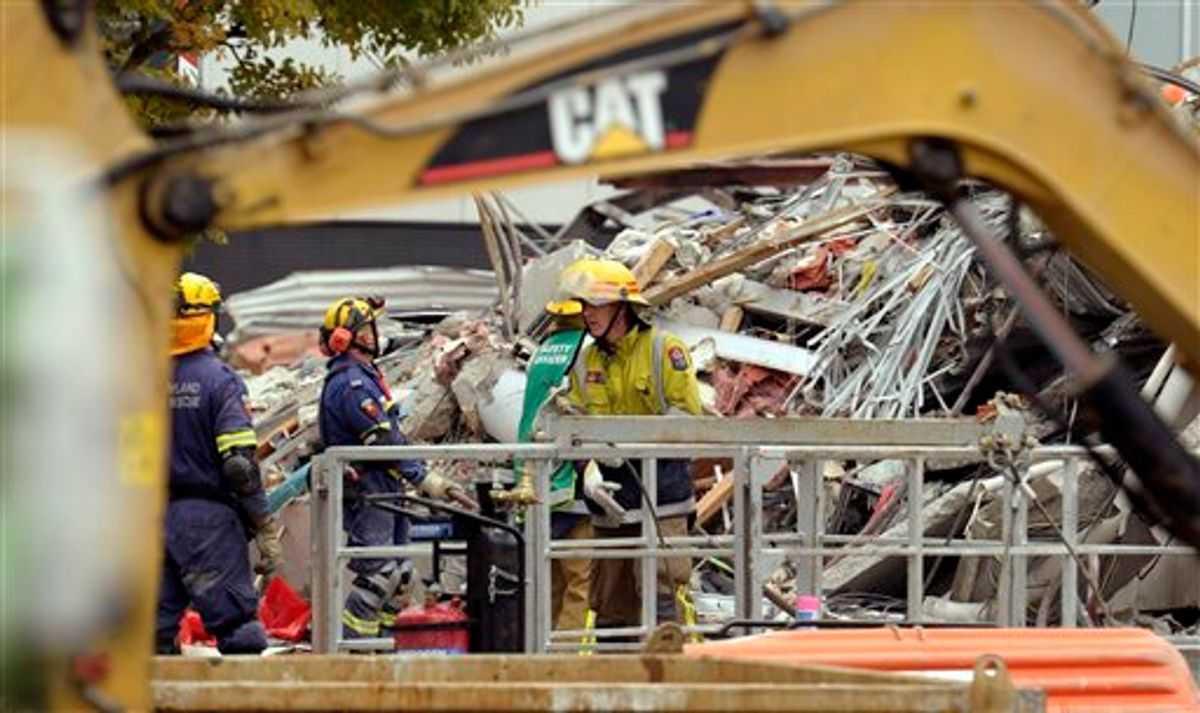 Rescue workers clear rubble at the CTV building in Christchurch, New Zealand , Friday, Feb. 25, 2011 in Christchurch, after the city was hit by a 6.3 earthquake Tuesday, Feb 22. The temblor struck Christchurch near lunchtime on Tuesday, collapsing buildings and causing massive damage in one of the country's worst natural disasters. (AP Photo/Rob Griffith) (AP)
--

The first text message said: "Mommy, I got buried." About 40 minutes later: "Mommy, I can't move my right hand." Then, a brief call from New Zealand's earthquake rubble to parents in the Philippines pleading to send help.

After another harrowing hour in a crumpled building, when she sent a half-dozen more texts about increasing pain, continued shaking and overwhelming smoke, came the final one: "Please make it quick."

That was the last the Amantillo family heard from 23-year-old student Louise Amantillo, who is among dozens of foreigners missing after their language school disintegrated in Tuesday's collapse of the prominent CTV building in Christchurch.

"Her voice was shaking, like she was really scared. I know she was in pain," her mother, Linda Amantillo, told The Associated Press from her hometown in the central Philippines. Three days after receiving the last text, she was desperately hoping that her daughter was still alive.

Officials have said they are virtually certain no one was still surviving in the ruins of the CTV building, and that up to 120 bodies are entombed there.

The King's Education language school catered to students from Japan, China, the Philippines, Thailand, Saudi Arabia, Taiwan, and Korea. The building's collapse in the 6.3-magnitude quake has pulled an international group of anguished relatives into an agonizing vigil awaiting conclusive word on the victims.

Many of the relatives arrived Friday at the Christchurch airport, including about 20 from Japan who were whisked onto a bus by embassy officials. Police later held a meeting with school officials and parents at a community center for a briefing on rescue and recovery efforts.

"There will be families receiving the worst kind of news in the next few days," Foreign Minister Murray McCully said Friday. "This is not just New Zealand's tragedy, it's a tragedy that will touch many families around the world."

Christchurch Mayor Bob Parker sought to reassure foreign relatives that everything possible was being done.

"We think that your children are our children -- there is no difference," he said. "We are taking full responsibility to do everything we can to assist those families ... and in the rescue operation."

The Amantillos are a medical family, from Iloilo province in the central Philippines where they speak the Ilonggo dialect.

Linda Amantillo is a nurse and her husband, Alexander, is a doctor. Their daughter followed suit and studied to become a nurse. She set her sights on working abroad and went to New Zealand to immerse herself in English.

"The nurses here don't have jobs, and she wanted to strive," Alexander Amantillo said.

The family has a sister-in-law who works in New Zealand, and she has gone around to check hospitals in Christchurch, but there has been no sign of Louise, he said Friday. The family also plans to send a son and niece to Christchurch to monitor the search.

It has been a painful three days for the Amantillos since that first text came across in the Ilonggo dialect: "Ma, naambakan ako," or "Mommy, I got buried," as dictated by Linda Amantillo in telephone interviews on Thursday.

But Louise's texts, sent every five to seven minutes, were getting increasingly desperate. "I have not yet been rescued. It's painful already," she wrote at 2.45 p.m. Then, "There is no rescue in my area." Two minutes later: "The smoke is overwhelming."

At 3.32 p.m. the family received Louise's last message, giving her location -- corner of Madras Street and Chassel Street -- and ending it with the final plea, "Please make it quick."

Overwhelmed by worry, Linda Amantillo tried to call her daughter. But all she heard was a recorded response asking the caller to leave a message.