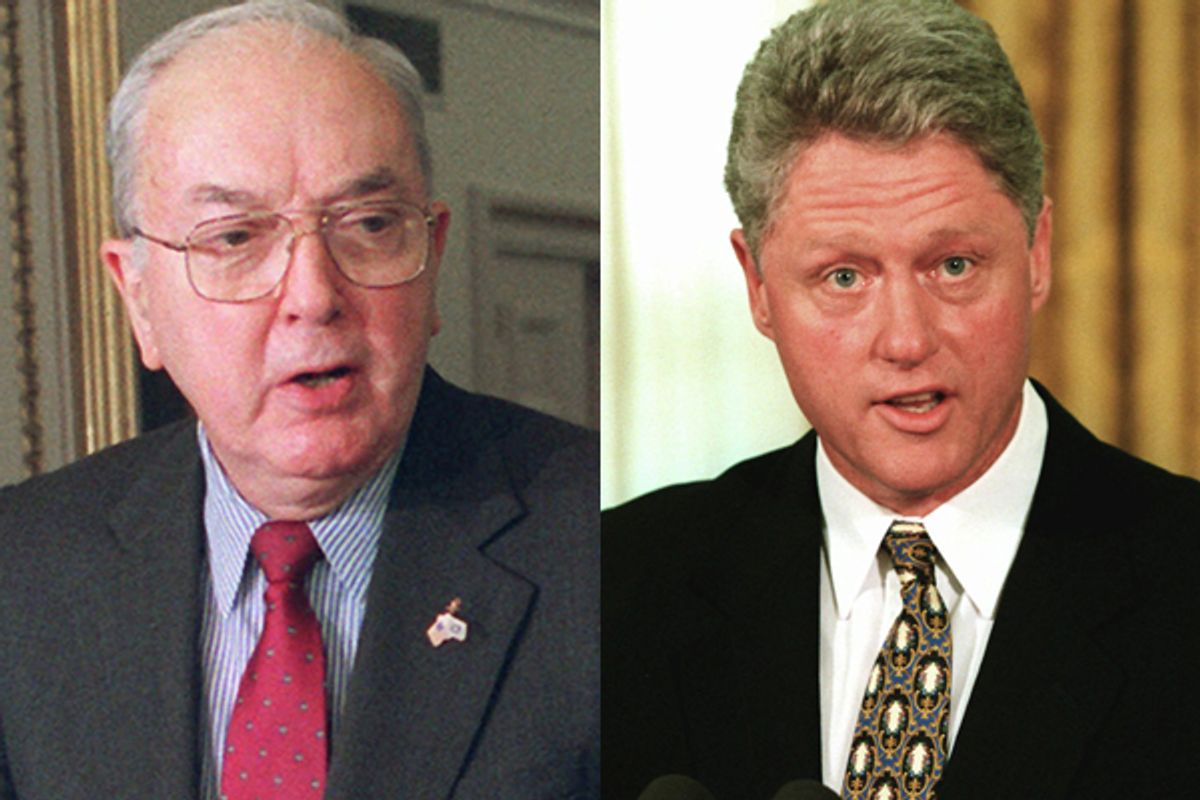 Let's be clear: The right hardly has a monopoly on intemperate rhetoric and the man who stood up at a Georgia town hall recently and asked, "Who's going to shoot Obama" probably doesn't actually want the president to be killed. (The Secret Service has concluded as much.)

But his comment to Rep. Paul Broun, perhaps the preeminent Tea Party voice in the House, and Broun's apparent reaction to it  (no outrage, no condemnation, maybe laughter, and then a reply that explained why frustration with Obama is logical) is telling nonetheless, because it speaks to the intense resentment that seems to flourish on the right whenever a Democrat is in the White House.

As I've noted before, the behavior that has come to define conservative activism in the age of Obama -- reflexive opposition justified by overheated, irrational and hysterical claims about Obama's legitimacy and motives -- shouldn't have caught anyone off-guard. We saw this show before, when Bill Clinton was president and the right became obsessed with wild conspiracy theories (remember Vince Foster's suicide?) and convinced itself that the president and his wife were part of some countercultural, socialistic plot. And we saw it when Jimmy Carter was president (although the dynamics were a little different, since Carter spent most of his term at war with liberals in his own party) and we saw it when Lyndon Johnson was president. This is just what the right does when Democrats run Washington.

In this sense, the exchange at Broun's town hall meeting is reminiscent of Jesse Helms' reaction in November 1994 to the news that Clinton would be visiting a military base in North Carolina. "Mr. Clinton better watch out if he comes down here," Helms said. "He'd better have a bodyguard." Not surprisingly, Democrats reacted with outrage and Helms' GOP Senate colleagues prodded him to recant; he ultimately admitted that it had been a mistake to make the statement, but then added, "Of course, I didn't expect to be taken literally."

Helms wasn't speaking for every Republican or every conservative when he opened his mouth, but his utter personal contempt for Clinton was indicative of the right's mid-'90s mind-set. His "bodyguard" quip came just weeks after Republicans posted massive midterm election gains, their strength particularly pronounced in North Carolina and other Southern states, where white voters turned hard against Clinton and the Democrats. It's hard not to read about Broun's town hall exchange and see the same dynamic at work today.

Of course, the right's attitude toward Clinton has changed dramatically these past few years. Not coincidentally, this reevaluation took hold at the same time that Obama emerged as the presumptive Democratic presidential nominee in 2008. Suddenly, expressing fondness for Bill and Hillary (and forgetting all about all of the nastiness of 1993 and 1994) served a practical political purpose for the right, helping them to portray Obama as a dangerous, extreme-even-by-Democratic-standards outsider -- the same thing that they once claimed Clinton was.

In other words, maybe a decade or two from now, when some other Democrat is sitting in the Oval Office, don't be surprised if Paul Broun is out there longing for the good old days when a reasonable, pragmatic, impossible-to-dislike Democrat named Barack Obama was running the country.