Maybe it's a relic, but the union model is essential

Michael Lind is right that we need to move away from employer-based benefits. But we need unions to get there 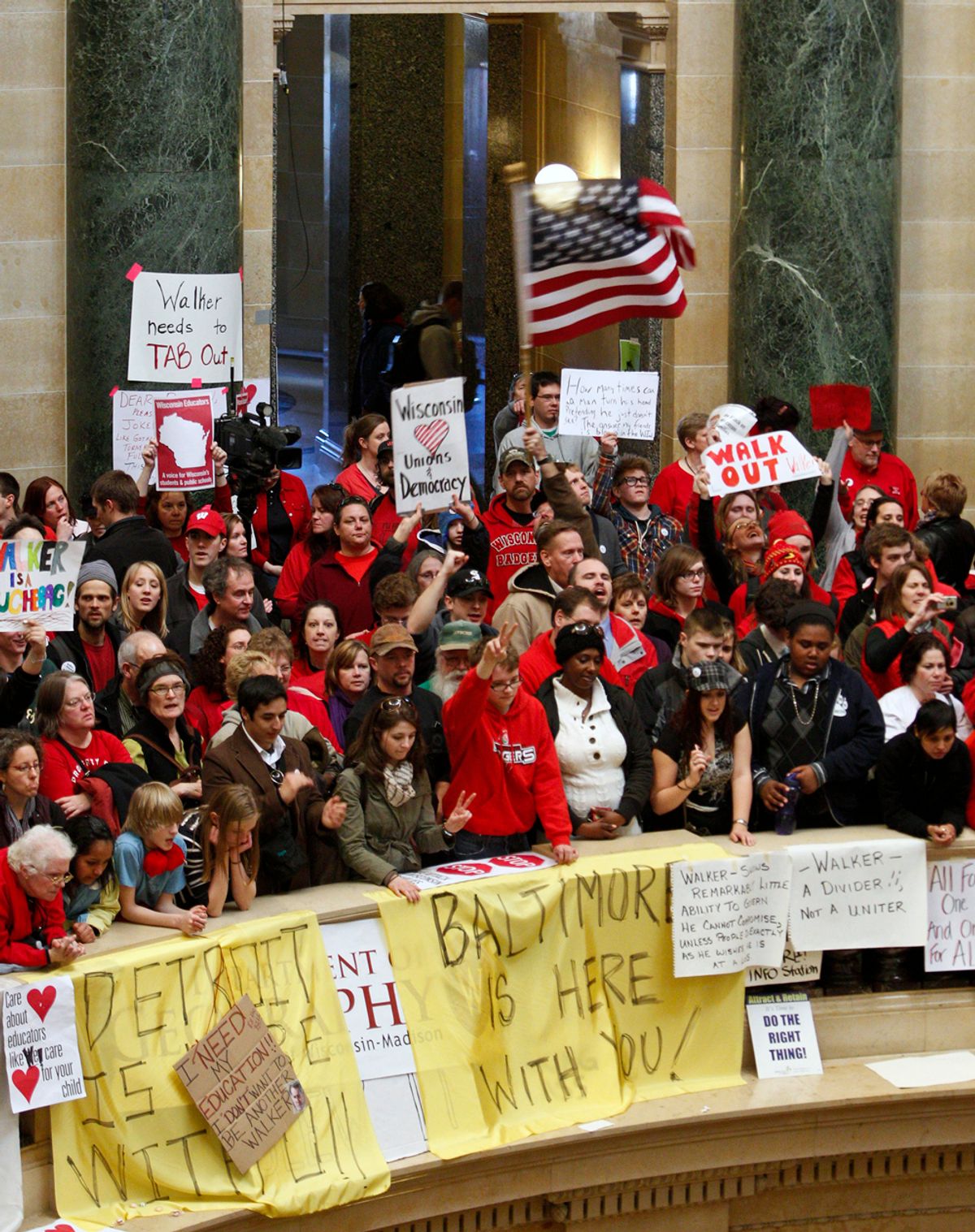 FILE - In this Feb. 18, 2011, file photo opponents to the Wisconsin Gov. Scott Walker's bill to eliminate collective bargaining rights for many state workers protest in the rotunda of the State Capitol in Madison, Wis. Stung by the wave of anti-union sentiment in Wisconsin and more than a dozen other states, organized labor is re-energizing as a political force and trying to take advantage of the growing backlash. They expect momentum from the protests to spill into the 2012 election cycle. (AP Photo/Andy Manis, File) (Andy Manis)
--

The struggle over the right to collectively bargain in Wisconsin raises yet again the question of the labor movement’s future and its role in a broad, liberal vision of America. First they came for the private sector unions, now they’ve come for the public sector unions. Is this labor’s last stand -- and if it is, should we care?

Michael Lind, writing in Salon earlier this week, offered a vision of liberalism without labor. The labor movement has constituted only one strand of the American liberal tradition, he contends, and it has hardly been the most popular or most supportive of its policy vision. The other traditions include technocratic progressivism, with its endorsement of paternalistic, means-tested programs for the poor and its faith in an administrative state run by experts; the Jeffersonian and Jacksonian tradition of liberal populism, "which has championed small farms, small businesses and economic development of rural America"; and finally, social democracy, which he identifies "with universal social insurance programs like Social Security, Medicare and unemployment insurance."

Only liberal populism and social democracy have held any sway among American voters. Lind therefore argues that the outcome of the fight over public-sector unionism in Wisconsin doesn't seal the fate of liberalism either way. Even more, Lind communicates the feeling that labor is something of a millstone around liberals' necks. Sure, unions have played a supportive role for key liberal policies, such as the New Deal and Great Society. But this seems hardly to have made up for the baggage the labor unions carry with them -- imposing monopolistic restraints on competition, sympathizing with "foreigners" and immigrants, corruption, and acting as shadowy puppet masters for the politicians whose campaigns they fund. According to Lind, "Liberals must ask themselves whether defending archaic 1950s-style employment and benefit arrangements that survive as fossil relics in the public sector fits into a plausible and potentially popular vision of a reformed American social contract in the 21st century."

Lind clearly sees himself as an avatar of American social democracy. Employer-based benefits that labor unions delivered are a relic; universal, contributory social insurance programs are the future of liberalism. I agree. But Lind, unfortunately, gives us absolutely no reason to think this vision can be achieved without a labor movement. I will explain why I think the labor movement is essential, but my argument depends only partly on the fact that unions turn out votes for Democrats -- a fact that, as Lind correctly notes, has no appeal outside liberal circles.

The beauty of universal social insurance programs is that they tend to generate broad-based support for their continuance. Thus, while means-tested programs like Aid to Families With Dependent Children (AFDC) have been effectively rolled back, universal programs like Medicare and Social Security remain popular. But even the universalizing logic of social insurance has natural limits. All insurance is redistributive in the sense that the primary beneficiaries of the program are those who by force of bad luck have their houses burn down, their cars smashed, or whose bodies contract cancer. But public social insurance is inevitably more so, since it requires the participation of all, rich and poor alike; it tends to implicate life chances where the line between choice and luck are harder to define; and it will, by force of politics, bend toward the interests of the middling classes. Because of that fact, and despite the popular appeal of universality, the rich will always want to opt out and self-finance their insurance.

As a consequence, the distribution constraints of social insurance are greater the more unequal a society is. It is a brute, if unappreciated, political fact that countries that have more universal social insurance programs also have less inequality in the first place -- that is, less pretax, pre-transfer inequality. This is a deeply counterintuitive finding. Logic would suggest exactly the opposite. Countries with more economic inequality will have poorer median voters -- the voters who, in political theory, determine the platforms that parties propose in order to win elections. Poorer votes would like more redistribution. In order to win over the median voters, political parties should shift to the left, and propose programs that redistribute more.

Yet this is exactly the opposite of what we observe. Of course, what this simple story leaves out is campaign finance and, more generally, the power of the wealthy to influence the election process. In more unequal societies, not only would the poor like more redistribution, but the rich are both more willing and better able to spend money in order to shift the political game in their favor.

No better example of this process at play can be found than in the United States, where economic inequality is back to "Gilded Age" proportions. Medicare and Social Security are certainly popular programs. But the attacks upon them by the anti-redistributive and pro-wealthy right have been relentless. And the recent debacle over healthcare reform demonstrates just how difficult, and perhaps impossible, it will be to forge new universal social programs, let alone defend, in any form, the old ones. The jettisoning of the most universalizing aspect of the healthcare bill -- the public option -- earned Obama and the Democrats the accolades of "weak" and "spineless." But Obama and the Democrats understand the political game better than their Democratic base. To win elections requires money, and to get money you have to pay attention to the wealthy few.

If there is less inequality to begin with, broad and universal social insurance programs look and feel more like, well, insurance, and less like Robin Hood redistribution from rich to poor. The question is what causes lower pretax, pre-transfer economic inequality? Looking again cross-nationally, it turns out that labor unions play a critically important role. Collective bargaining over wages reduces economic inequality for workers both within and between firms. Thus, there is an important relationship between labor unions and the social democratic programs that Lind upholds as the best bet for liberalism. By reducing pretax, pre-transfer inequality, labor unions broaden the appeal for such programs while also making them more politically feasible.

Lind correctly notes that American labor unions have historically resisted universal social programs in favor of their employer-based bargains. But this has much to do with the very same reasons that American labor unions have in the past been less successful in reducing economic inequality. American labor unions are characteristically fragmented and historically wedded to a narrow, craft-union philosophy. But labor unions are undergoing tremendous change, as they must if they are to survive. Accordingly, it is not clear why Lind holds up the Old Labor of the past as any indication of how a revitalized labor will act in the future. The labor movement must do more to change itself, but given the transformations thus far, there is little reason to think the New will be anything like the Old.

Labor unions also represent the best hope for reviving the civic republicanism of Jeffersonian and Jacksonian populism, the other "successful" strand of American liberalism. The small farmer is even more of a relic than labor unions. And despite a lot of talk about a new, networked economy that was supposed to unleash individual entrepreneurialism, small business also only constitutes a minority fraction of an economy dominated by employees and large corporations.

In fact, a rich language of labor rooted in the Jeffersonian republican tradition was alive and well in the 19th century, but was squelched between the progressive elements of New Deal liberalism and an ascendant socialism and communism of the early 20th century. Labor unions, sometimes termed by their supporters as "schools of democracy," can be the institutional equivalent of the yeoman farmer for the 21st century. Necessarily collective because of the nature of a modern economy, they yet provide the same economic bulwark for the middle class independent of state or political-party machine. Labor unions, social democracy and Jeffersonian republicanism are not so far apart after all.

What institutional alternatives exist that can perform all of these functions? Lind dreams of "a popular movement capable of replacing the lost legions of organized labor at the polls." But alas, he offers no vision or reason to think of anything that can replace labor. And I can only think of reasons why potential alternatives will fail. As already noted, our winner-take-all, bicameral, federalist and candidate-centered political system is irredeemably rigged by the special interests of the wealthy few. In the wake of Citizens United, the notion of campaign-finance reform seems quixotic, if not a joke. Politicians can only think of "movement" from one political cycle to the next. Political parties, in and of themselves, are a dead end.

Matthew Dimick is currently a research fellow at Georgetown University Law Center, where he writes and teaches in the areas of labor and employment law, corporations, and law and economics. He holds a PhD in sociology from the University of Wisconsin-Madison, a law degree from Cornell Law School, and was formerly a law fellow at the Service Employees International Union in Washington, DC.