Our culture of avarice 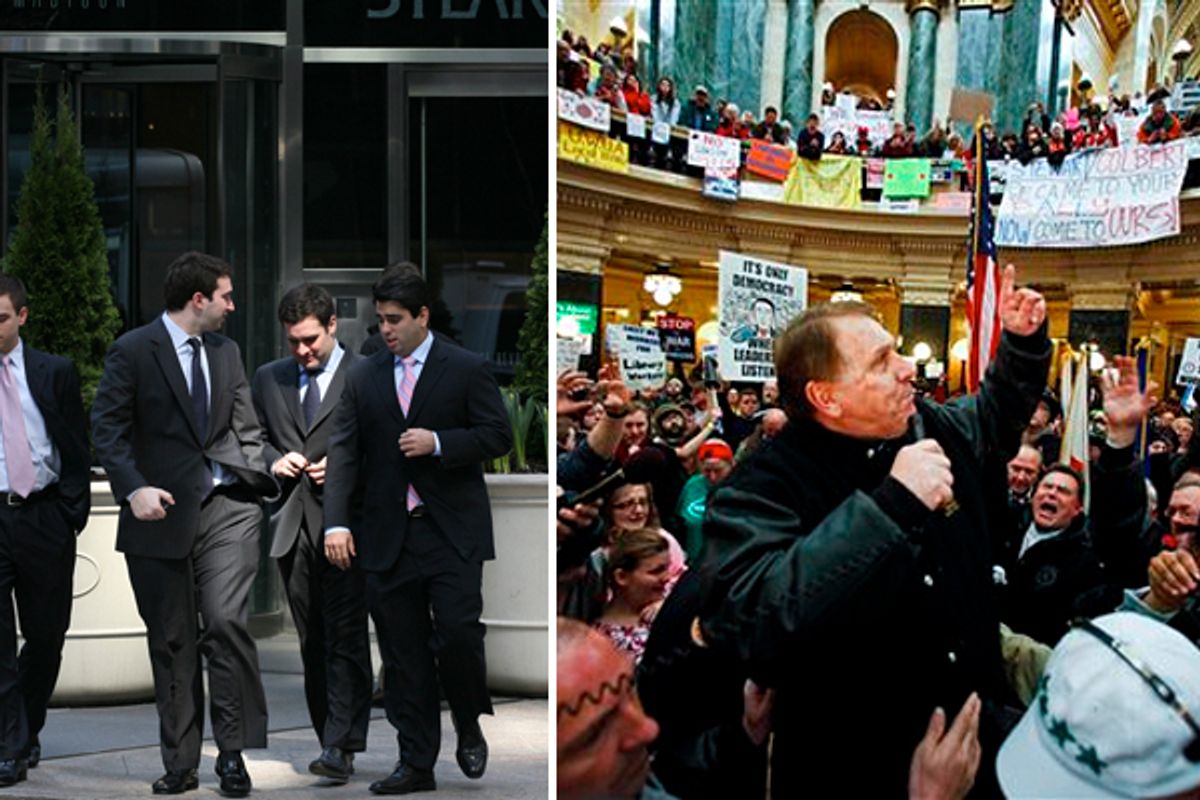 As the latest showdown to dominate American politics, the battle between Wisconsin's governor and public employees carries many unspoken messages. It tells us, for instance, that Republicans do not see collective bargaining as a fundamental human right. It also suggests that Democrats are willing -- finally! -- to draw a line in the sand. But most important of all, it shows what government really sees as its top priority.

Recall that in recent years, we've witnessed two separate debates over two types of taxpayer-subsidized laborers. First, we saw a brief argument over how much taxpayer money should pay government-sponsored bankers on Wall Street. Now, we're having a more prolonged discussion about how much taxpayer money should pay public employees in our schools, police departments, fire departments and infrastructure agencies.

To the government-funded bankers, we've applied the notion of "you get what you pay for." Thus, our government has refrained from ending exorbitant pay packages at taxpayer-funded banks in the name of "retaining talent." That was the mantra of politicians and publicly subsidized financial executives when they weakened proposals to cap annual bank salaries at $500,000. Though an astronomical sum, one Wall Street advisor told reporters that half-a-million bucks "is not a lot of money," while others repeated a talking point from a corporate report insisting that government-sponsored banks would "experience a talent drain" if barred from paying employees millions.

Of course, this same idea of paying a premium to retain talent is nowhere in our discussion about the other set of public workers. Instead, we mostly hear politicians and media voices berating teachers, firefighters and police officers as "freeloaders" or "welfare cases." This, despite the Economic Policy Institute reporting that these non-bank public employees make 3.7 percent less than those in similar private-sector jobs.

Taken together, this may seem like a double standard, but it's actually a consistent, if abhorrent, statement of priorities in an age of avarice -- an age in which financial executives can grossly outspend middle-class workers on campaign contributions.

In this corrupt system, public compensation decisions by bought-off elected officials highlight a larger corporatist ideology -- one that says attracting the best and brightest to the "greed is good" financial industry is more important than attracting that workforce to common-good endeavors.

In this view, $500,000 isn't nearly enough taxpayer cash to retain government-funded bankers, but $48,000 (the average teacher salary in Wisconsin) is too much to pay educators. In this view, the government is "there to serve the banks," as the new chairman of Congress' Financial Services Committee said, but police and firefighters are expected to serve the population, even as those police officers and firefighters are berated for receiving middle-class wages.

Yes, in this destructive and now-ascendant view, government exists to pad private profits but do nothing more -- and that's the kind of government we should all expect to get.