Picturing Libya on the verge of chaos 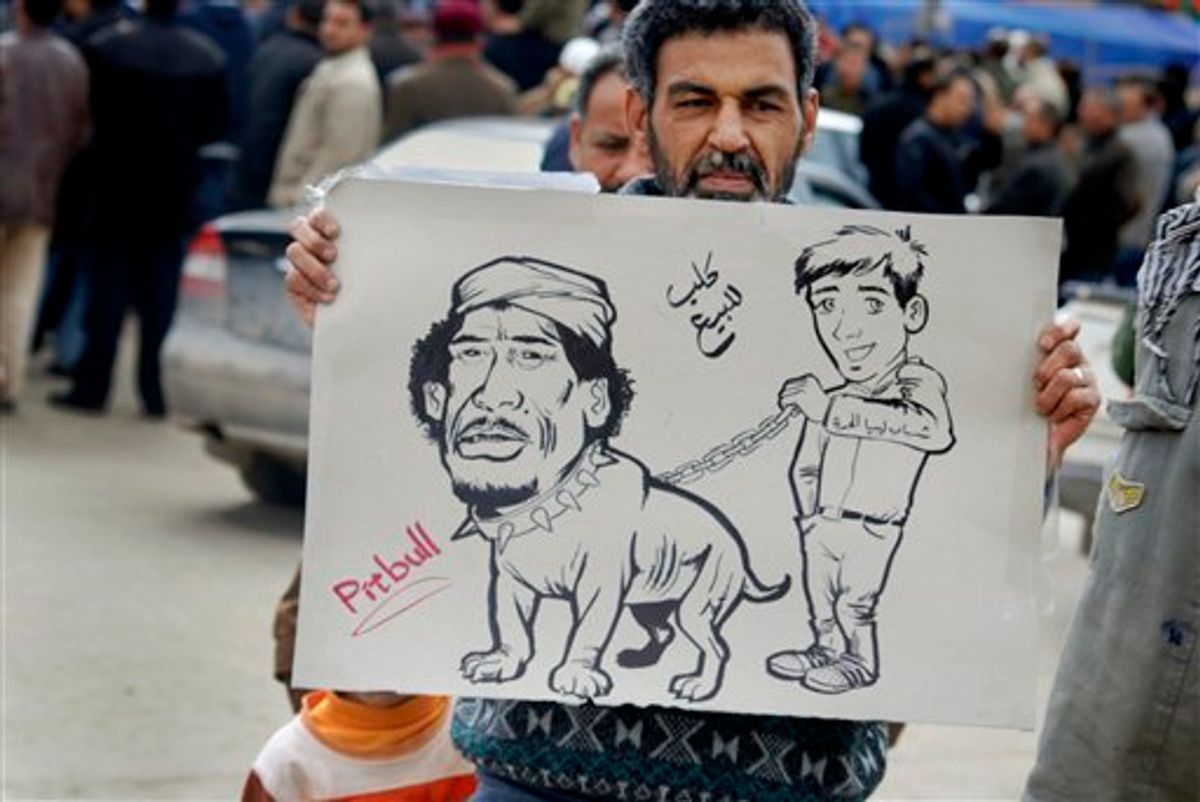 A protester holds a placard portraying Libyan Leader Moammar Gadhafi as a pitbull dog held on a chain by a youth, with writing in arabic reading "Dog for sale" and on arm of youth "Youth of Free Libya", in Benghazi, Libya Wednesday, Feb. 23, 2011. Militiamen loyal to Moammar Gadhafi clamped down in Tripoli Wednesday, but cracks in his regime spread elsewhere across the nation, as the protest-fueled rebellion controlling much of eastern Libya claimed new gains closer to the capital. (AP Photo/Alaguri) (AP)
--

Just one week after the protests began, Moammar Gaddhafi seems to have lost control of Libya. The army has by and large sided with the people in several areas of the country, and Benghazi, Libya's second largest city, has effectively fallen into the hands of the demonstrators. They are now calling it Free Benghazi, and stomping out all reminders of their former leader. Abroad, the U.N. has called for Libya's expulsion.

But violence is still prevalent, particularly in Tripoli, as the former army colonel is completely unwilling to let go of his absolute dominion. Every public statement Gaddhafi has made has suggested that his entrenchment is a product of his wild detachment from reality. We've collected a series of videos and photographs of the protesters below. Volunteer residents carrying the flag of Libya's monarchy prior to Moammar Gadhafi's reign, and offering to help in providing municipal services. (AP/Alaguri) Security forces who have joined the uprising carry the flag of Libya's monarchy as they drive vehicles scrawled with writing in Arabic reading "February 17th Committee", a reference to the start of the Libyan uprising. (AP/Alaguri) Gunmen prepared to fight against Moammar Gadhafi stand on a small military truck with weapons taken from a Libyan military base. (AP/Hussein Malla) Freeze-frame of an amateur video obtained Feb. 24 and released by Libyan opposition groups, purportedly shows fire in the middle of street, tracer fire and people running away between Feb 18-19. (AP) Freeze-frame of an amateur video obtained Feb. 24 and released by Libyan opposition groups, purportedly shows a crushed red car surrounded by a gesticulating and distressed crowd, as tanks roll in the distance releasing exhaust smoke between Feb 18-19. (AP ) Libyan boys flash V signs as they stand over a destroyed cannon tank at Al-Katiba military base. (AP/Hussein Malla) A protester holds a placard portraying Gadhafi as a pitbull dog held on a chain by a youth, with writing in arabic reading "Dog for sale" and on the arm of the youth "Youth of Free Libya." (AP/Alaguri)