White House changes to a harsher tone with Gadhafi's regime after all U.S. personnel safely evacuated the country 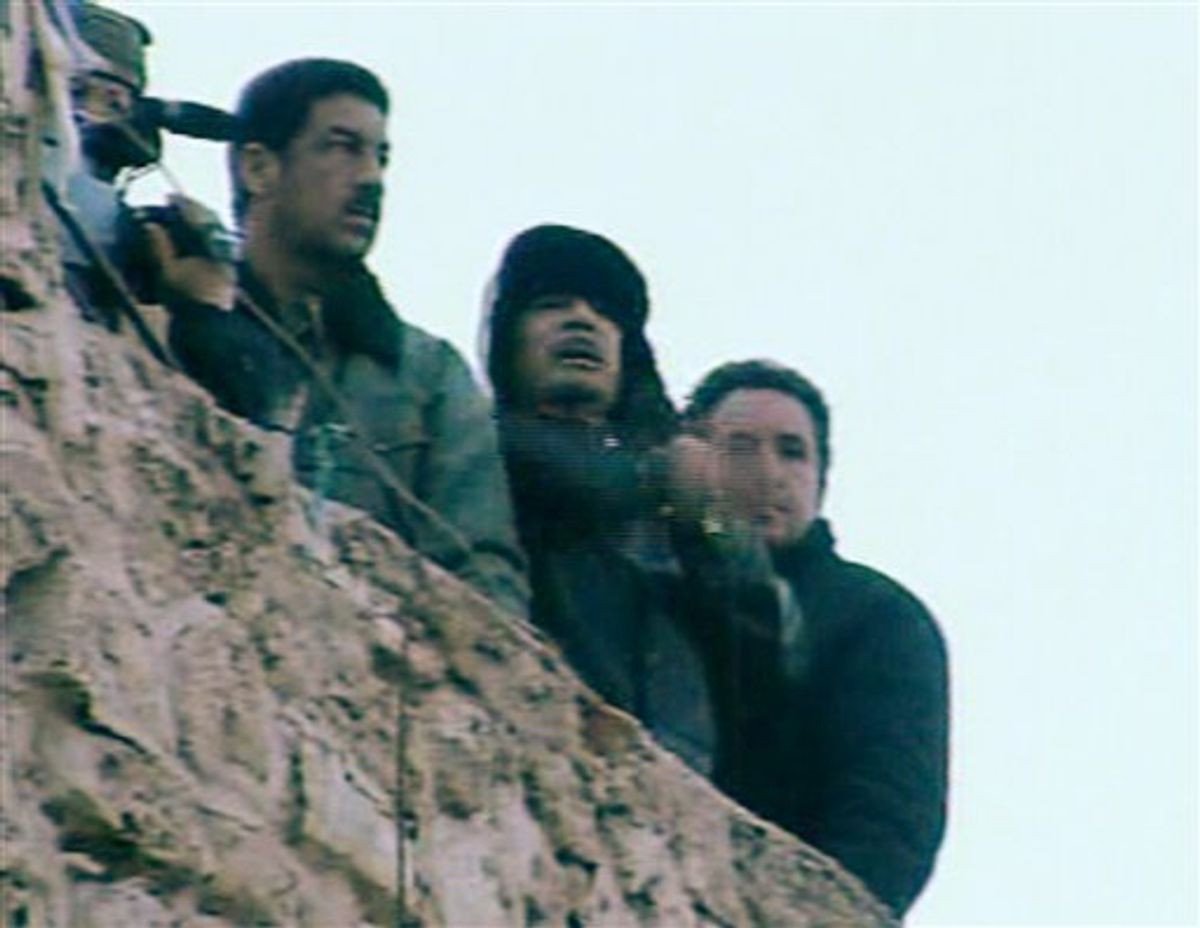 In this image taken from Libya State Television, showing Libyan leader Moammar Gadhafi, centre, as he speaks to followers from the top of a stone wall at The Green Square, central Tripoli, Libya, Friday, Feb. 25, 2011. The TV station declared this to be a live broadcast from the square and also showed a large crowd celebrating in the square below. (AP Photo/Libya State) TV OUT (AP)
--

The United States shuttered its embassy in Libya on Friday and readied stiff financial and other penalties against Moammar Gadhafi and his loyalists, ending days of cautious condemnation by all but calling for the unpredictable leader's immediate ouster.

Gadhafi's legitimacy has been "reduced to zero," the White House said as it announced the steps.

The sharper U.S. tone and pledges of tough action came after American diplomatic personnel were evacuated from the capital of Tripoli aboard a chartered ferry and a chartered airplane, escorting them away from the violence to Malta and Turkey. As they left, fighting raged on in Tripoli and elsewhere in Libya as Gadhafi vowed to crush the rebellion that now controls large parts of the country.

With U.S. diplomats and others out of harm's way, the administration moved swiftly. Shortly after the chartered plane left Libyan airspace, White House spokesman Jay Carney said the U.S. had been constrained in moving against Gadhafi and his loyalists due to concerns over the safety of Americans but was now ready to bring more pressure on the government to halt its attacks on opponents.

"It's clear that Colonel Gadhafi has lost the confidence of his people," Carney told reporters. "He is overseeing the brutal treatment of his people, the fatal violence against his own people and his legitimacy has been reduced to zero in the eyes of his people."

The White House was finalizing a presidential executive order that would name Gadhafi and his family, impose travel bans and freeze assets, according to an administration official familiar with the document who spoke on condition of anonymity because it had not yet been made public. Part of the goal of such efforts is to encourage Gadhafi loyalists to defect.

Carney said sanctions would "make it clear that the regime has to stop its abuses, it has to stop the bloodshed." International officials say thousands may be dead.

But the hesitancy to outline the full range of U.S. punishments reflected in part the administration's skepticism that it had many options to influence Gadhafi. The 68-year-old has had a rocky relationship with the West, and American officials are worried about his unpredictability as he desperately seeks to maintain his four-decade grip on power.

U.S. military action is considered unlikely, although the Obama administration has not ruled out participation in an internationally-administered protective no-fly zone.

Carney said some sanctions would be unilateral, and others would be coordinated with international allies and the United Nations, whose chief, Ban Ki-moon, was invited to Washington for Monday talks with President Barack Obama.

Carney cited U.N. negotiations on a possible weapons embargo, but declined to lay out the independent steps the U.S. would take.

The Treasury Department had already ordered American banks to scrutinize accounts linked to senior Libyan officials and inform authorities of any attempts to misappropriate or divert public funds.

The U.S. suspended operations at its Tripoli embassy after a chartered flight took the last embassy staff out of the country at 1:49 p.m. EST. That followed a ferry that departed earlier Friday and arrived in Malta with nearly 338 passengers aboard, including 183 Americans.

The U.S., however, did not break diplomatic relations with Libya because it wants to retain the ability to communicate directly with Libyan officials to appeal for restraint and an end to the violence, State Department officials said. The embassy will be re-opened once security conditions permit, they said.

The administration stressed that the U.S. pressure was part of a broader movement to bring peace to Libya, with several officials saying the international community was speaking with a single voice on the matter. Secretary of State Hillary Rodham Clinton is headed to Switzerland on Sunday to meet foreign policy chiefs from key allies. Officials said she might announce specifics of the U.S. sanctions on Monday.

But whereas French President Nicolas Sarkozy told Gadhafi to step down, the U.S. refrained -- just barely -- from a similar declaration.

"The status quo is simply neither tenable nor acceptable," Carney said. "The Libyan people deserve a government now that protects the safety of its citizens, is responsive to their aspirations and is broadly representative."

Obama was briefing world leaders on U.S. plans and coordinating the international pressure on Gadhafi's government. He spoke Friday with Turkish Prime Minister Recep Tayyip Erdogan and they discussed measures to hold Libya's government accountable for its "unacceptable" violence. That followed Thursday's discussions with leaders from Britain, France and Italy.

The U.S. maintained a stiff embargo against Libya for years, calling it a terrorist sponsor. Washington eased restrictions over the past several years in recognition of Gadhafi's decision to renounce his nuclear weapons program and his cooperation in anti-terror operations. Carney said the U.S. would suspend the limited military cooperation it had with the country.

Libya ranks among the world's most corrupt countries and has enormous assets to plunder. Confidential State Department cables suggest that U.S. banks manage hundreds of millions in Libyan assets and the government has built a multibillion-dollar wealth fund from oil sales.

In Geneva, U.S. diplomats joined a unanimous condemnation of Libya at the U.N. Human Rights Council, which launched an investigation into possible crimes against humanity by Gadhafi's regime and recommended Libya's suspension from the body.

The U.N. Security Council in New York was discussing action simultaneously Friday, and NATO was talking about deploying ships and surveillance aircraft to the Mediterranean Sea.

Carney insisted the sanctions could work.

"Sanctions that affect the senior political leadership of a regime like Libya have been shown to have an effect," he said. We are also ... pursuing actions that will ensure that the perpetrators of violations of human rights are held accountable."