"Birdemic" has become a cult hit among bad-movie fans. A new Blu-Ray release confirms the hype 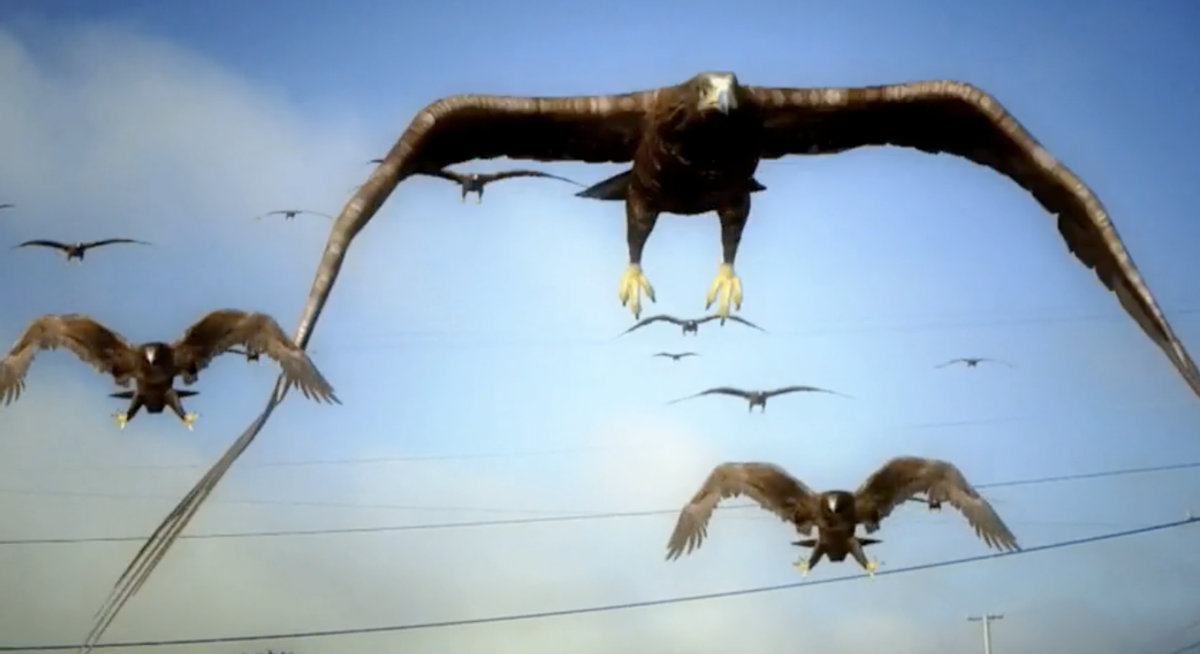 I never thought that CGI could be as funny as that guy stumbling around Bronson Caverns in half a gorilla suit and a diving helmet in "The Robot Monster" or Ed Wood's famous flying hubcaps from "Plan 9 from Outer Space." But just as I thought it was safe to dismiss the unintentional comic potential of computer effects altogether, "Birdemic: Shock and Terror," a film whose widely-mocked trailer went viral last year, has arrived to prove me utterly wrong with its scenes of clip-art turkey vultures badly matted over panicking vacationers. I never knew that bad CGI could be so good.

In fact, there's a scene in "Birdemic" of a computer generated dead eagle on the beach that would've looked more realistic if the filmmakers had just taken a stuffed bird that they won at the San Mateo County Fair and splattered ketchup all over it. But unlike the thrown together Mega Pythons, Gatoroids and Sharktopi that come slithering out of Syfy almost every week, "Birdemic" dares to be a movie with a message. Just as Ed Wood thought that "Plan 9" was picking up where the anti-nuke warnings of "The Day the Earth Stood Still" (1951) left off, writer/director/producer James Nguyen really believes that his "Birdemic" is the ultimate combination of Hitchcock and Al Gore. Not only did I think that CGI couldn't be this funny, but I also never thought I'd see this kind of honest bad filmmaking ever again.

That honesty has paid off for Nguyen, earning his little flying turkey mention in the New York Times and Entertainment Weekly as well as a multi-city theatrical release that Kevin Smith is currently attempting to replicate with his religious splatter flick "Red State." And now Severin Films is releasing "Birdemic" on Blu-ray, the higher definition accentuating a picture that's always threatening to go out of focus. The audio, presented in Dolby 5.1 surround, isn't done any favors either. "Birdemic" has some of the worst sound this side of "The Creeping Terror," a 1964 monster mash with almost no synchronized sound whatsoever. I'm amazed at how the sound techs could generate this much hiss using digital equipment. If I didn't know better, I'd swear that they took a track of old analog tape hum and let it run through the entire picture.

But Nguyen isn't all about technical competence or swooping raptors that burst into flames for no reason; he considers himself "The Master of the Romantic Thriller," and has even trademarked the title to prove it. Nearly two-thirds of "Birdemic" is taken up by the deliberately paced romance of a Silicon Valley software salesman named Rod (Alan Bagh) and Natalie (Whitney Moore), a "sexy lingerie model." While their courtship delivers a treasure trove of bad dialogue, none of the lines is a gut-buster when you rip it out of context. For Bagh and Moore it's all in the delivery, which is akin to the copy of a bland personals ad being delivered by an automated voice messaging system.

After several dates where they spend an uncomfortable amount of time discussing financial planning, Rod and Natalie consummate their relationship with a trip to the annual Pumpkin Festival in Half Moon Bay, a costal suburb of San Francisco that makes for a misplaced tribute to Hitchcock's "The Birds," which takes place 95 miles north in Bodega Bay. Our feathered friends somehow hold themselves back from attacking the world's largest gourd, and only wreak havoc the morning after Rod and Natalie engage in a long bout of hotel-room footsie. As the couple make their aimless escape from a bird-ravaged coast, they fall in with an ex-marine who keeps an arsenal in his dilapidated minivan.

Driving up the coast and shooting birds along the way, the survivors meet up with an ornithologist who says, "We must act more like astronauts and spacemen, taking care of our spaceship Earth," as well as a hippie in an obvious wig who lives in a treehouse and lectures them on bark beetles and "this damned global warming." The birds respectfully refrain from attacking during these educational interludes where Nguyen hurries to cram in as much of his environmental message as he can before he burns through the film's entire $10,000 budget. No matter how much you may agree with Nguyen's central premise, laughing through his heavy-handed and clunky delivery is one of "Birdemic's" main attractions, but it's worth noting that climate change may have delayed this very review. East Coast snowstorms kept all those Blu-discs of "Birdemic" trapped in a Georgia processing plant. "This damned global warming," indeed.