Libya fractured: A look at the liberated city of Benghazi 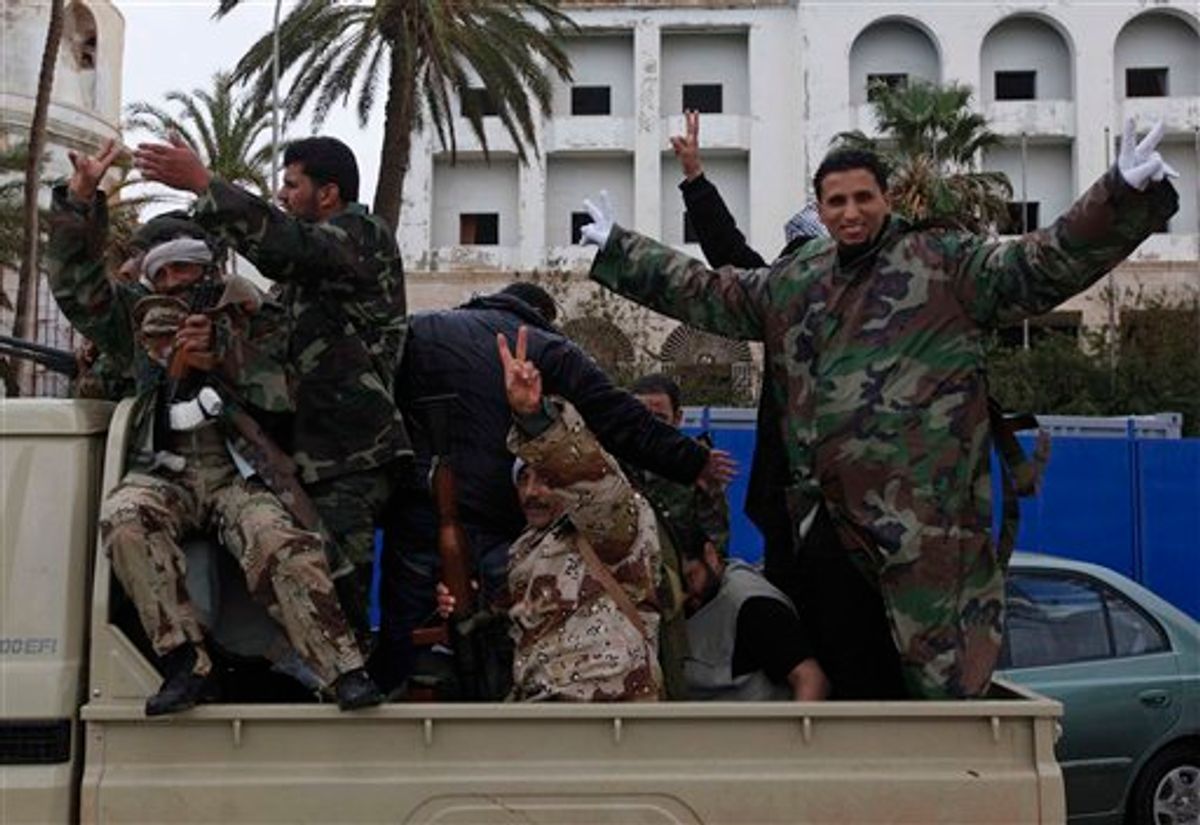 Libyan gunmen flash the V sign as they stand on a military vehicle driving in the streets of Benghazi, Libya, on Friday Feb. 25, 2011. Several tens of thousands held a rally in support of the Tripoli protesters in the main square of Libya's second-largest city, Benghazi, where the revolt began, about 580 miles (940 kilometers) east of the capital along the Mediterranean coast. (AP Photo/Hussein Malla) (AP)
--

Libya is split in two. Counterbalancing the nightmarish scene in Tripoli -- where armed counter-revolutionary forces strike violently back against dissenters -- is one of jubilation in Benghazi, Libya's second largest city. This after Libyan soldiers defected to the side of the protesters earlier this week, ending President Moammar Gadhafi's rule over the seaside town. Benghazi now represents the center of the Libyan liberation movement -- the most powerful example of the country's fervid struggle to shake the yoke of Gadhafi. Indeed, much of the eastern half of Libya is now free of government control. And it all started in Benghazi.

Liberation movements in Tunisia and Egypt tell one story of democratic revolt. Zinedine Ben Ali, Tunisia's ex-president, and former Egyptian leader Hosni Mubarak both stepped down quickly and after relatively limited bloodshed. While democratic reform won't likely come easy, there's at least some hope for a unified approach to national reformation. Gadhafi, by comparison, has struck back at his people with a concerted campaign of terror. The dictator digs in and fends off revolution in the capital. And disparate sections of the country now gravitate towards two different poles -- the war-torn Tripoli and the liberated Benghazi.

Time's Ken Stier says that even if and when Gadhafi should fall, it won't likely bring peace to Libya -- that the divisions defined by the recent weeks' unrest are sewn more deeply in that country's history than many westerners understand.

Indeed, it is quite possible for Libya to splinter into two or more entities. It has only been a unified country since 1951. Already, the geographical split between opposition and Gaddafi loyalists roughly falls along profound cultural and tribal divisions that go back thousands of years. The East was always more a part of the Greek and Egyptian world while the West was more Phoenician and Roman. Those distinctions were operative at key moments in history.

In the mean time, however, the people of Benghazi focus on the here and now as they look to build a post-Gadhafi society for themselves.

According to Umm Ahmed, head of Benghazi's management committee for its interim city council:

Yes, there are no police, no institutions. Law and order as defined doesn’t exist. But in practice, Benghazi is incredibly safe. Safer than it was under Qaddafi. People are all volunteering, the banks are opening. We surprised even ourselves.

We've collected some of the best images from Benghazi to give you a better idea what the scene there looks like:

Evacuees of many nationalities queue to board a ship to be evacuate from Benghazi sea port, Libya, on Friday. (AP/Hussein Malla) Libyan protesters shout slogans against Libyan Leader Moammar Gadhafi during a demonstration at the court square, in Benghazi on Friday. (AP/Hussein Malla) Libyan gunmen flash the V sign as they stand on a military vehicle driving in the streets of Benghazi. (AP/Hussein Malla) Libyan protesters offer their Friday prayers as they gather at the court square to protest against Ghadafi in Benghazi. (AP/Hussein Malla) A Libyan protester holds up a sign as she shouts slogans against Ghadafi during the demonstration before Friday prayers, in Benghazi. (AP/Hussein Malla) Another Libyan protester displays a sign during a demonstration against Ghadafi before Friday prayers. (AP/Hussein Malla)