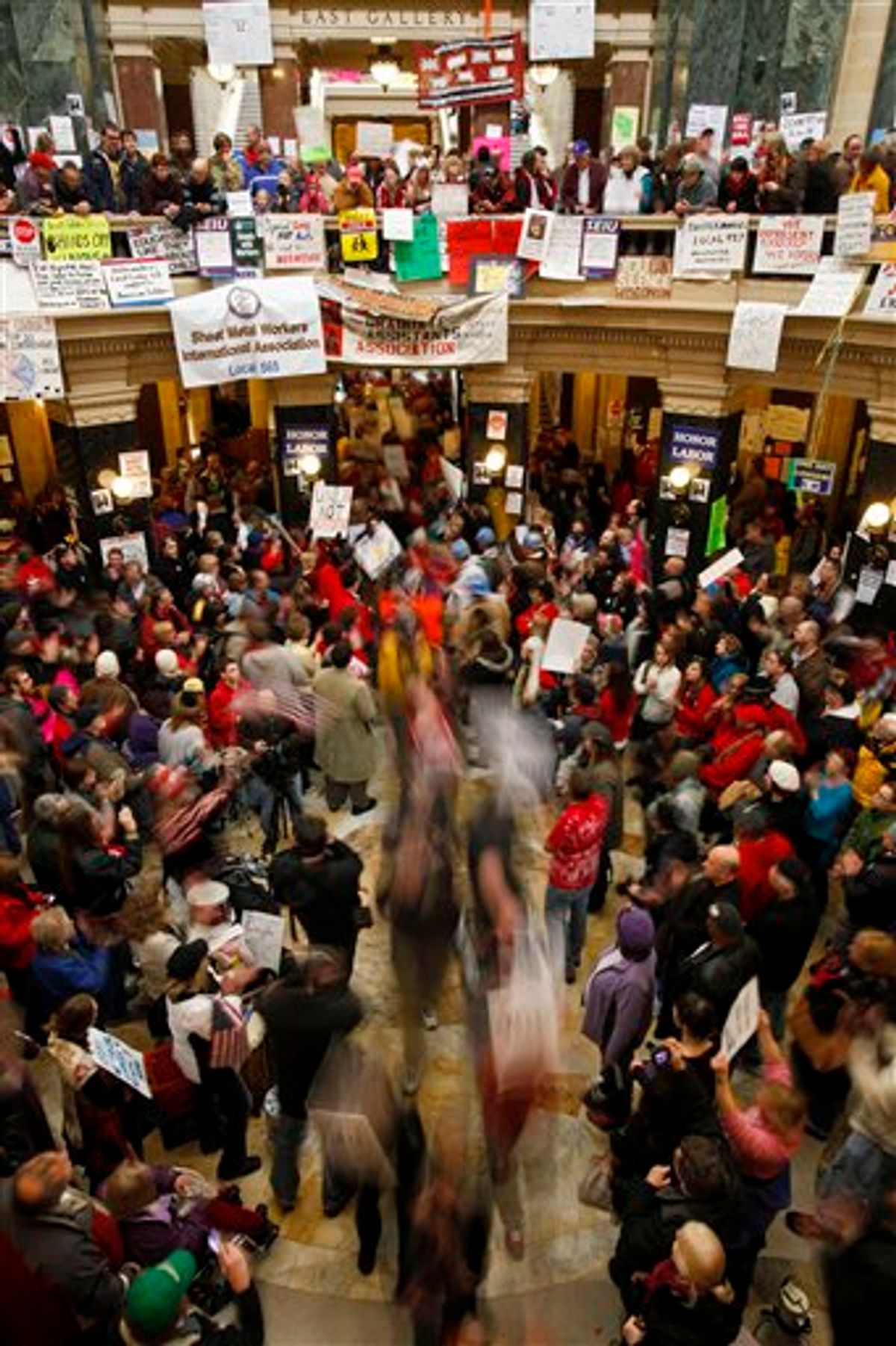 Protesters to the governor's bill to eliminate collective bargaining rights for many state workers march through the center of the rotunda at the state Capitol in Madison, Wis., Friday, Feb. 25, 2011. Protests are in their 11th day at the Capitol. (AP Photo/Andy Manis) (AP)
--

Harriet Rowan was among the first to join the Wisconsin Capitol protest village. That was on Valentine's Day, and it was only the next day when thousands of others began camping out with her in the rotunda that the rumor mill, misinformation and confusion took off as fast as the crowd size.

"I came back on Tuesday night and there was absolutely no organization," Rowan said. "People needed people to go up upstairs and testify all night to keep the building open ... people were going around just waking people up ... it was chaotic."

The University of Wisconsin senior made a snap decision to coordinate protest efforts, producing signs with media talking points and starting a Twitter feed detailing legislative meeting times, union rally locations and details on day-to-day life in the Capitol.

Other Madison residents have opened their doors to out-of-town visitors, offering lodging to anyone friendly to unions. At the Statehouse, pizza, chili and cheese are offered to hungry protesters. Busloads of supporters from Los Angeles and elsewhere arrive to boost the numbers.

Nearly two weeks after the start of widespread protests against Gov. Scott Walker's proposal that would strip nearly all public employees of their collective bargaining rights erupted, a network of volunteers has emerged that keeps the daily demonstrations alive.

The protests began Feb. 15, with 13,000 people attending rallies in and around the Capitol. Crowds peaked at 70,000 a week ago, a few thousand of which were tea party counter-protesters. Since then crowds outside the Capitol have dipped significantly, but those inside the Capitol still range in the thousands and police are bracing for another large crowd Saturday. Smaller sympathy demonstrations are planned elsewhere in the country.

In a third-floor room where the UW-Madison Teaching Assistants Association has based its support operations, a conference table is dwarfed by a mountain of bedding supplies. Posters organizing protests, rides and class coverage for absent TAs line the walls.

"I think in general having a sense of humor in all of this has been important," said Kevin Gibbons, TAA co-president. "You have some students I've been talking to reflecting on it and they say, 'Everybody sort of seems happy, this is a serious protest.' But it is needed to sustain this kind of energy."

The rotunda ground floor is at the heart of the protests, with drums and a microphone attached to a megaphone. The din is deafening. Some drummers wrap their hands with blue painter's tape to avoid injury from the repetitive pounding.

Most of those in the drum circle are unaffiliated with unions or political groups. Most are Madison residents or students, like UW graduate student Tom Bird.

"Friday night, I started slowly drumming a little and talking on the microphone once or twice," Bird said. "Then it just sort of snowballed. On Saturday, Sunday I'm leading massive groups of people in cheers."

The morning begins with breakfast cereals and bagels. Later in the day, tables are stocked with tortilla chips, specialty breads and vegan bakery items from a coffee shop. Gallons of soup and chili arrive from a cafe, cheese spreads from several sources and thousands of slices of pizza from a restaurant.

"We teach at the high school and work in community farms and with small businesses," said Mermaid Cafe owner David McKercher. "When the teachers are in trouble and the health profession is in trouble, those are our associates, so we jump in there."

Between empty pizza boxes and steaming teakettles is a makeshift day care center. Kids play and use markers to draw murals on butcher paper. Parents are told volunteers can look after the kids for 15 minutes if they need to use restrooms or get supplies.

At the medical center, street medics and the occasional doctor or specialist -- identified by their red-masking-taped-crosses -- tend to cuts and bruises. The biggest focus is hygiene, with boxes of deodorant, mouthwash, toothpaste and hand purifier lining the walls.

Protesters who don't stay in the Capitol have plenty of options. Paul Adler, who arrived from Washington, D.C., said he didn't know exactly where he was going to stay. But he had enough offers that he could choose accommodations based on proximity to the Capitol.

Capitol police have allowed protesters to stay 24 hours a day and hundreds do most nights. But police plan to end the sleepover at 4 p.m. Sunday, setting up a potential showdown in what has been a relatively incident-free protest.

"I'm pretty sure there will be people unwilling to leave the building on their own two feet," Rowan said.