Libya rebels gear for bloody fight in city near capital

The opposition movement controls the city of Zawiya, but prepares to repel a heavy offensive by pro-Gadhafi forces 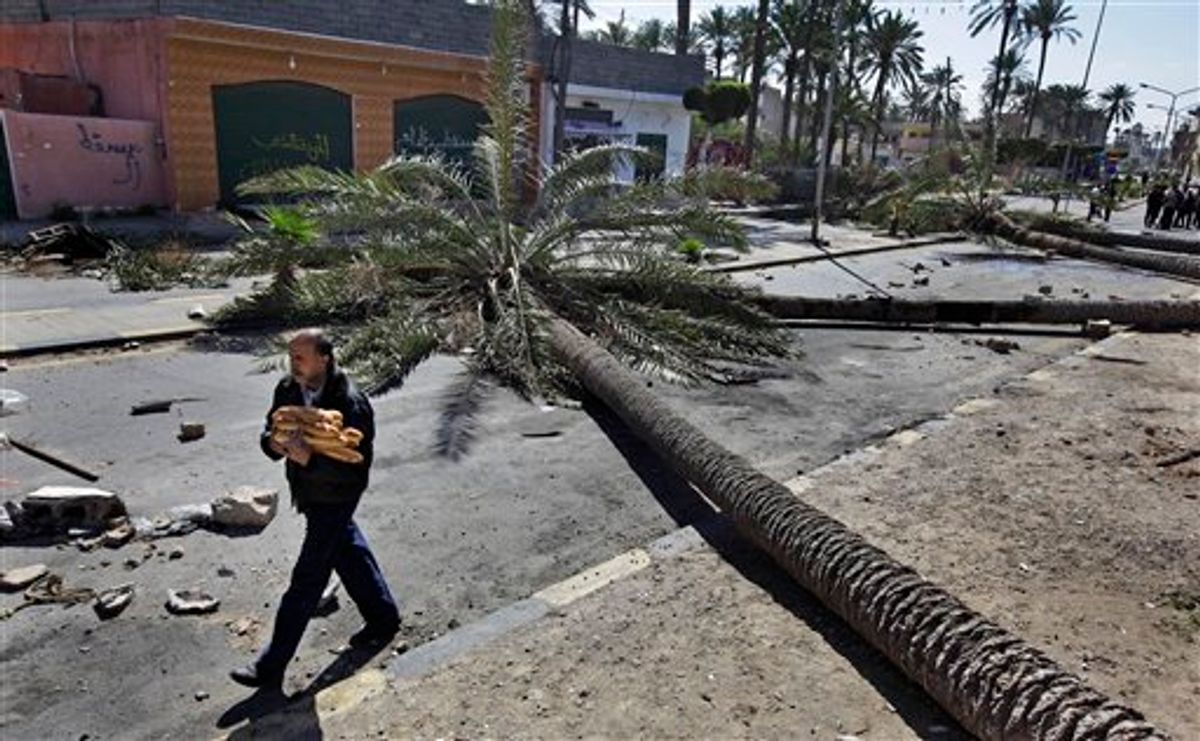 A man carrying bread from a bakery walks past felled palm trees used as roadblocks by residents in the Tajoura district of eastern Tripoli, Libya, Saturday, Feb. 26, 2011. Residents there have blocked many streets with roadblocks after protesters demanding Moammar Gadhafi's ouster came under a hail of bullets Friday when pro-regime militiamen opened fire to stop the first significant anti-government marches in days in the Libyan capital. (AP Photo/Ben Curtis) (AP)
--

Hundreds of armed anti-government forces backed by rebel troops who control the city closest to the capital Tripoli prepared Sunday to repel an expected offensive by forces loyal to Moammar Gadhafi surrounding Zawiya.

An Associated Press reporter who reached Zawiya, 30 miles (50 kilometers) west of Tripoli, confirmed the anti-government rebels are in control of the center of the city of 200,000. They have army tanks and anti-aircraft guns mounted on pickup trucks deployed. But on the outskirts, they are surrounded by pro-Gadhafi forces, also backed by tanks and anti-aircraft guns.

There were at least six checkpoints controlled by troops loyal to Gadhafi on the road from Tripoli to Zawiya. Each checkpoint was reinforced by at least one tank, and the troops concealed their faces with scarves.

Gadhafi has launched by far the bloodiest crackdown in a wave of anti-regime uprising sweeping the Arab world. The United States, Britain and the U.N. Security Council all imposed sanctions on Libya over the weekend. And President Barack Obama said it is time for Gadhafi to go.

Zawiya, a key city close to an oil port and refineries, is the nearest population center to Tripoli to fall into the opposition hands. Police stations and government offices inside the city have been torched and anti-Gadhafi graffiti was everywhere. Many buildings are pockmarked by bullets.

"Gadhafi Out," chanted hundreds in the city center. The charred skeletons of many cars littered the city and most streets were blocked by palm tree trunks or metal barricades. "Free, Free Libya," chanted members of the anti-government forces at the city center.

"Down with Gadhafi, the mass murderer," read graffiti scrawled in the city. An effigy of Gadhafi hung from a light pole in the city's main square. On its chest the words "Execute Gadhafi" were emblazoned.

The square has now become the burial place of six of 11 rebels killed by pro-Gadhafi forces Thursday when they attacked the area to try and dislodge them. Residents reported several skirmishes between the two sides since Thursday.

"We are all wanted," said one rebel at the square who did not want to give his name for fear of reprisals. "Zawiya in our hands is a direct threat to Tripoli."

Rebels from the town and army forces who defected from the regime to join them largely consolidated control of the town on Feb. 24, after an army unit that remained loyal to Gadhafi opened fire on a mosque where residents -- some armed with hunting rifles for protection -- had been holding a sit-in.

Before Zawiya fell to rebel forces, Gadhafi scolded the city residents on Thursday.

On Feb. 24, local forces repelled an attempt by militiamen and pro-Gadhafi troops to take back the town.

Later, Gadhafi's son, Seif al-Islam, acknowledged to foreign journalists in Tripoli that there were "two minor problems" in Misrata and Zawiya. There, he said, "we are dealing with terrorist people," but he hoped to reach a peaceful settlement with them.

Gadhafi loyalists remain in control of nearby Tripoli, which was reported to be quiet Sunday, with most stores closed and long lines outside the few banks open for business.

This version CORRECTS Corrects dates and days of the week in paragrahs 11, 13. AP Video.