State officials plan to clear the building this evening, but protesters hint that they might not leave quietly 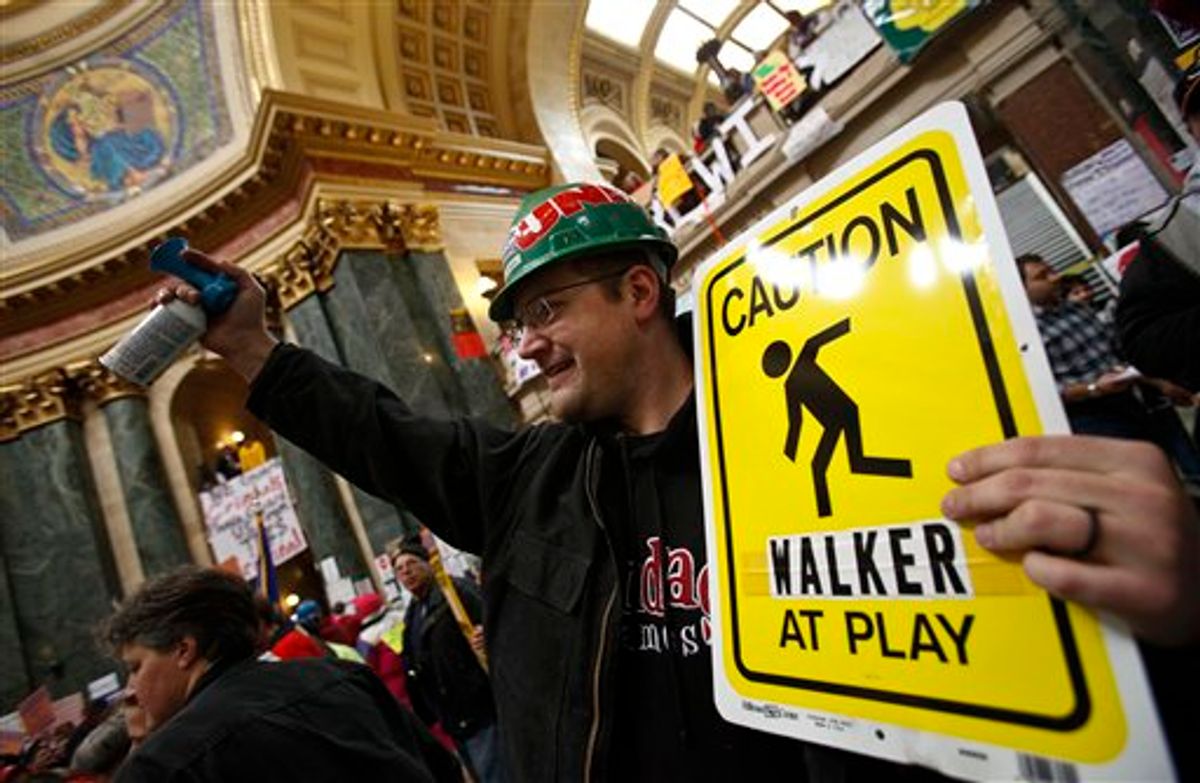 Union steam fitter Andrew Williams of West Allis, Wis., uses an air horn during protest at the state Capitol in Madison, Wis., Friday, Feb. 25, 2011, over the governor's proposed budget. Protests to the governor's bill to eliminate collective bargaining rights for many state workers are in their 11th day at the Capitol. (AP Photo/Andy Manis) (AP)
--

Taylor Tengwall spent the last seven nights sleeping inside Wisconsin's Capitol building alongside thousands of fellow pro-union protesters, and he was hoping state officials would relent on their decision to clear the building for the night starting Sunday.

"I have faith I will not have to leave," said Tengwall, an earnest 21-year-old from Duluth, Minn., who was sporting a few days' growth of stubble, a wrinkled T-shirt, sweat pants and socks.

With Republican Gov. Scott Walker's bill to strip public workers of collective bargaining rights stuck in a legislative stalemate, some of the protesters who made the Capitol their home over the past two weeks hinted that they might not go easily when police begin clearing the building at 4 p.m.

"We will not leave," read a hand-printed sign taped up next to one sleeping bag. The Wisconsin AFL-CIO sent out a press release Sunday predicting hundreds of protesters would risk peaceful arrest.

The Department of Administration said the Capitol is in bad need of cleaning after 13 days of 24-hour occupation. Protesters have not trashed the building, but it has taken on the funky locker room aroma of body odor, sweaty feet and deodorant.

Tengwall -- who said he dropped out of school for the semester and came to Madison "to protect my country from a despotic government" -- said his top priority was that things remain peaceful. He said he's seen enormous good will and respect built up between the demonstrators and law enforcement officers keeping watch.

"One act of violence could put out this fire we've started," Tengwall said.

Luke Bassuener, a 31-year-old art teacher in Madison, has slept in the Capitol for nine nights. He said prior plans would keep him out of the Capitol at 4 p.m. Sunday, but he has every intention of sleeping there again.

"They said we won't be able to have sleeping bags anymore," Bassuener said. "So I'll sleep under my jacket."

Saturday's estimated crowd of more than 70,000 demonstrators was the largest since protesters moved into the Capitol on Feb. 15. And pro-union crowds gathered in cities across the country in a show of support for Wisconsin's public workers.

In a Sunday interview on NBC's "Meet the Press," Walker said the lengthy protests haven't eroded his resolve to push forward with his legislative agenda and to end collective bargaining rights for most public workers.

"Year after year, governors and legislators before us have kicked the can down the road. We can't do that. We're broke. It's about time someone stood up and told the truth in our state and said here's our problem, here's the solution and let's do this," he said.

Walker argues that the Republican-backed bill now stalled in the state Senate would help close a projected $3.6 billion deficit in the 2011-13 budget, and that freeing local governments from collective bargaining would give them the necessary flexibility to deal with deep budget cuts.

Democratic lawmakers and union supporters are incensed by the bill, particularly because it would strip nearly all public workers of their right to collectively bargain on benefits and working conditions. Leaders of Wisconsin's largest public workers' unions have capitulated to Walker's demands for their members to cover more of their pension and health care benefits, and contend that his attack on collective bargaining is meant to undermine unions and the Democratic Party base.

The bill stalled in the state Senate when its 14 Democratic members fled the state, depriving it of a quorum by a single vote. Walker said Sunday that he expects some of those Democratic lawmakers to return to the state capital soon.

Democratic state Sen. Jon Erpenbach, reached by phone Sunday in Illinois, said he and his colleagues have no plans to return.

Wisconsin's standoff is being closely watched by pro- and anti-union groups in other states, including Ohio, where several thousand people rallied Saturday in the capital Columbus against a similar bill. Indiana Democrats successfully blocked a Republican bill last week that would have prohibited union membership from being a condition of employment.

Large crowds of teachers, firefighters and public workers also gathered for rallies -- holding American flags, wearing pro-union clothing and holding signs -- in other capital cities including Denver, Topeka, Kan.; Harrisburg, Pa.; and Olympia, Wash. The cross-country rallies were part of a campaign by the liberal online group MoveOn.org, and some attracted counter-protests, though the pro-union rallies were larger.

Jay Van Loenen, a teacher who was among about 1,000 at the Denver rally, said he thinks the Wisconsin standoff has galvanized union workers throughout the country.

"Wisconsin is opening up people's eyes a little bit," Van Loenen said. "So I think that the move is to try to get people more involved in their unions and create a stronger front so that if something happens here, we are prepared."

In Los Angeles, public sector workers and others held signs that read "We are all Wisconsin" during a rally. Some wore foam "cheeseheads," the familiar hats worn by Green Bay Packers fans.

Covered in layers of coats, scarves, hats and gloves, about 1,000 rally goers outside the Minnesota Capitol chanted "Workers' rights are human rights" and waved signs, some reading "United we bargain, divided we beg."

"The right to collectively bargain is an American right," Eliot Seide, a local union leader, told the crowd in St. Paul. "You can't have American democracy if you don't have a strong trade union movement."