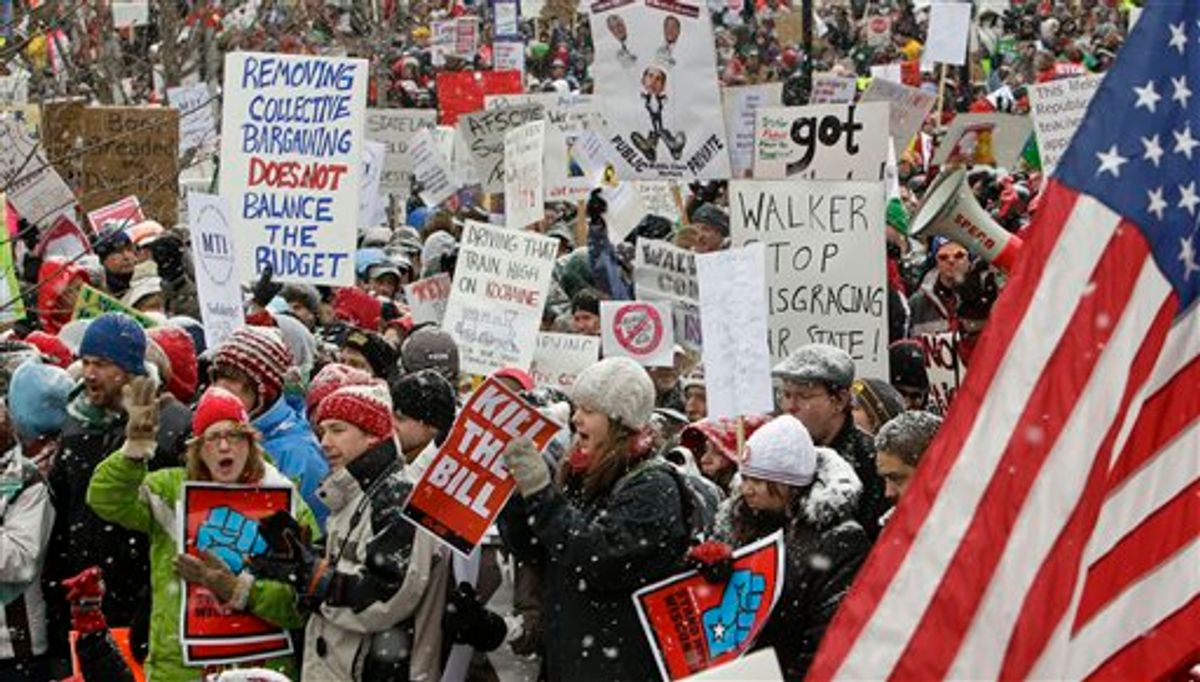 Opponents to the governor's bill to eliminate collective bargaining rights for many state workers protest outside of the state Capitol in Madison, Wis., Saturday, Feb. 26, 2011. Union supporters are on the 12th day of protests at the Capitol. (AP Photo/Andy Manis) (AP)
--

Chanting pro-union slogans and carrying signs declaring "We are all Wisconsin," protesters turned out in cities nationwide to support thousands of public workers who've set up camp at the Wisconsin Capitol to fight Republican-backed legislation aimed at weakening unions.

Union supporters organized rallies from New York to Los Angeles in a show of solidarity Saturday as the demonstration in Madison entered its 12th straight day and attracted its largest crowd yet: more than 70,000 people. Hundreds banged on drums and screamed into bullhorns inside the Capitol as others braved frigid weather and snow during the massive rally that flooded into nearby streets.

"I want to thank you for coming out here today to exercise those pesky First Amendment rights," actor Bradley Whitford, who starred in television's "The West Wing," said as he rallied his hometown crowd. "This governor has to understand Wisconsin is a stubborn constituency. We fish through ice!"

Republican Gov. Scott Walker has introduced a bill that includes stripping almost all public workers of their right to collectively bargain on benefits and work conditions. Walker has said the bill would help close a projected $3.6 billion deficit in the 2011-13 budget, and argues that freeing local governments from collective bargaining would give them flexibility amid deep budget cuts.

The bill has sent Democrats and unions into an outrage. They see it as trampling on workers' rights and as an attempt to destroy Democrats' strongest campaign allies.

Some protestors have even been sleeping in the Wisconsin Capitol. Police planned to let protesters stay overnight Saturday into Sunday but are expected to finally close the building Sunday afternoon for cleaning.

"Wisconsin is opening up people's eyes a little bit," said Jay Van Loenen, a teacher who attended a rally in Denver that attracted about 1,000 people. "So I think that the move is to try to get people more involved in their unions and create a stronger front so that if something happens here, we are prepared."

Several thousand people gathered for a rally in Columbus, Ohio, where lawmakers are considering a similar bill. Indiana Democrats successfully blocked a Republican bill last week that would have prohibited union membership from being a condition of employment.

In Los Angeles, public sector workers and others held signs that read "We are all Wisconsin" during a rally. Some wore foam "cheeseheads," the familiar hats worn by Green Bay Packers fans.

Covered in layers of coats, scarves, hats and gloves, about 1,000 rally goers outside the Minnesota Capitol chanted "Workers' rights are human rights" and waved signs, some reading "United we bargain, divided we beg."

"The right to collectively bargain is an American right," Eliot Seide, a local union leader, told the crowd in St. Paul. "You can't have American democracy if you don't have a strong trade union movement."

The rallies were part of a campaign by the liberal online group MoveOn.org to hold demonstrations supporting Wisconsin workers in major cities across the country. Some of the demonstrations attracted counter-protests, though the pro-union rallies were larger.

Madison Police spokesman Joel DeSpain said he didn't have a firm estimate on the Wisconsin capital's crowd, but said it was larger than last weekend when nearly 70,000 people descended on the Capitol.

The Wisconsin crowd cheered as pilot Jeff Skiles, the first officer on the US Airways Flight that landed in New York City's Hudson River in January 2009, said that "justice and righteousness will always win out." Skiles helped pilot Chesley "Sully" Sullenberger land the plane, whose 155 passengers and crew members were safely rescued.

Protesters jammed the Wisconsin Capitol steps, packed the ice-covered lawn -- some sat in trees -- and filled surrounding streets. Several thousand counter-protesters came out last Saturday to support Walker, but they were hardly visible this time.

People held signs that called Walker a parasite and a dictator and demanded voters recall him. Michael Janairo, a 4-year-old of Sheboygan, held a sign that showed Green Bay Packers star linebacker Clay Matthews tackling Walker. Michael's mother, Lisa Janairo, is not a public worker but drove to Madison to show support.

"For him to dictate and not negotiate is just wrong and we won't stand for it," the 45-year-old said.