Labor wins the day in Wisconsin 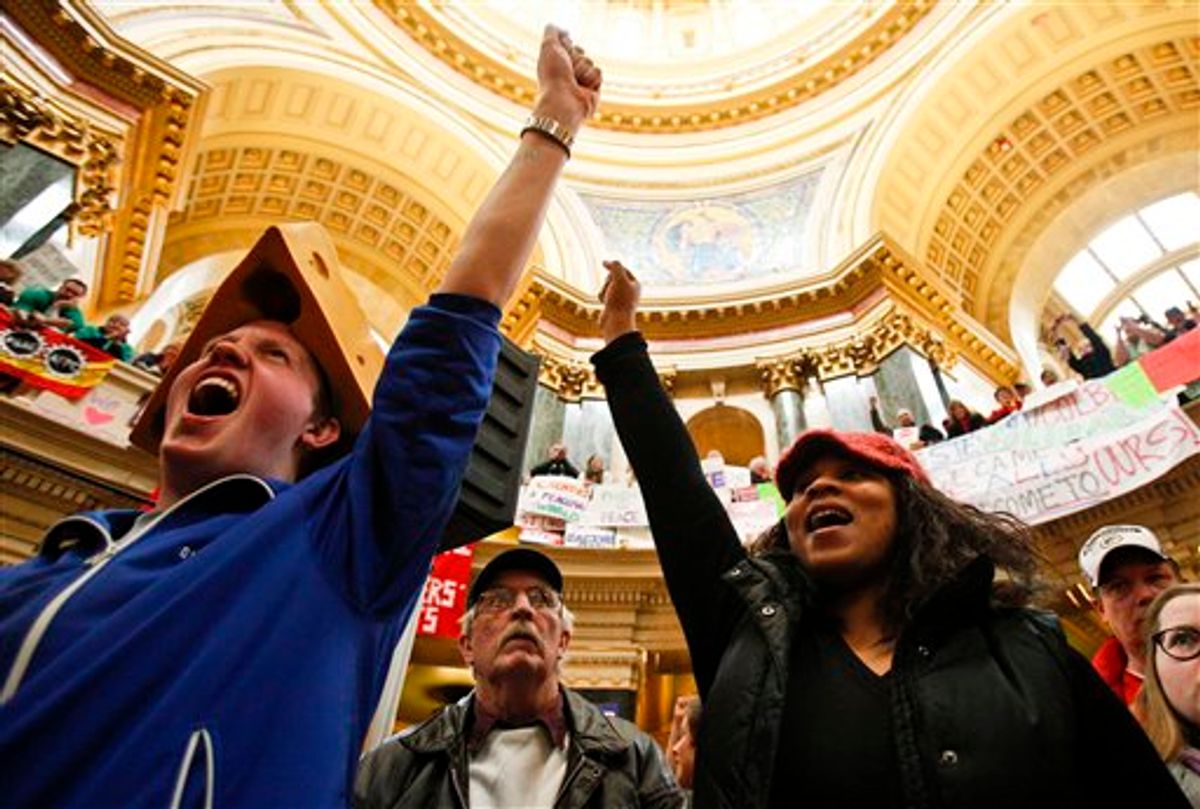 Sean Conard, left, of Green Bay, Wis., and Shyla Deacon of Milwaukee cheer during protests at the state Capitol in Madison, Wis., Saturday, Feb. 26, 2011. Protests to the governor's bill to eliminate collective bargaining rights for many state workers are in their 12th day. (AP Photo/Andy Manis) (AP)
--

I'm not going to pretend to be dispassionate about the Wisconsin protests. The first civil disobedience I ever witnessed personally was in Madison in 1978, when I was covering a protest at the Board of Regents meeting, where students demanded the regents divest the university's holdings in South Africa. I got maced by police in a stairwell just doing my job, but I was thrilled we were among the first universities to divest. I've been a proud Badger ever since.

All these years later, I've been thrilled by the growing protest movement against Gov. Scott Walker's union-busting in Wisconsin. This weekend, though, it was hard to indulge my obsession. Although an estimated 100,000 people gathered at the Capitol in Madison, including "West Wing" star and Wisconsin native Bradley Whitford, Rep. Tammy Baldwin and a contingent of off-duty and retired Wisconsin cops (who aren't directly hit by Walker's plan), the mainstream media barely paid attention. And on Sunday, when state police warned they'd clear the Capitol of protesters at 4 p.m. local time, and at least 1,000 pledged to commit civil disobedience to stay put -- including off-duty cops and firefighters and former Madison Mayor Paul Soglin -- well, you had to tune in to Twitter and a couple of Ustream live feeds to find out what was happening.

I really don't get it. CNN embedded reporters with Tea Party protests last year, but the struggling network couldn't be bothered with live coverage of the weekend's events. Even before Oscar red carpet coverage took over on Sunday, CNN was rerunning the same canned piece on the model Iman it had run Saturday. MSNBC was hopeless, running its canned crime documentaries all day long as usual. Fox News was more reliable; of course it covered the protests, since it does actual news on the weekends, but the network found anger and even violence where no one else did. (A Fox reporter claimed he was slugged off camera, but there was no other confirmation of the assault.) Things got really crazy when the AFL-CIO live stream failed, and organizers couldn't get back their Internet connection. For a while the only way to follow the goings-on in the Capitol was via activist Ben Brandzel's phone-cam and bloggers on site. It was great to hear the crowd sing "The Star Spangled Banner" and "We Shall Overcome," widening the appeal beyond the beloved labor hymn "Solidarity Forever." Andrew Kroll of Mother Jones kept up a live stream of photos from the Sunday rally, including this great one of a friendly cop chatting up a wildly dressed protester.

In the end Sunday night, state police officials told reporters that no one peacefully protesting would be removed from the Capitol by force. About an hour later, the crowd cheered the news that Republican state Sen. Dale Schultz announced he would not back Walker's bill. Democrats still need two more Republicans to block Walker's move, but the momentum seems to be on the side of the unions right now. The mainstream media missed a great story Sunday. It reminds Paul Krugman of the way the media also ignored the massive protests before the 2003 Iraq war. It's really depressing.

Since I couldn't go to Madison, I went to a San Francisco rally to support Wisconsin unions on Saturday. As moved as I am by what's happening in my former home state, I find myself consistently wondering: Is this movement just looking backward, or to the future? I'm not entirely sure, but there are some reasons to be optimistic. First of all, the crowds at the Madison rallies as well as the ones MoveOn helped organize around the country on Saturday look, well, like America. In less demographically diverse states, some even look like Tea Party crowds -- older, whiter but in touch with the way the wealthy have rigged the system against the rest of us for the last 30 years. In other places, they're more diverse. The San Francisco crowd was heavy on cheeseheads and Badger gear, which was great. It was a little older than I might have hoped, and as far as I could tell, only union members spoke (the sound system was dreadful). I'd have liked to see some artists, small business folks and elected officials, too. But for a rally organized in just a few days, it was a decent start. (Here's a photo of me and the great Lizz Winstead in the crowd.)

Now the question is: What next? It's great to see more Americans waking up to the threat of union busting, but I'm not sure we'll ever see the revival of a mass labor movement of the size and strength that won us the New Deal and other progressive legislation. What new forms of organizing can either replace or augment the labor movement to represent the interests of the non-wealthy in this country? What will the stirring of support for Wisconsin public workers mean in the longer run? Is it really the beginning of a progressive mobilization that can fight the arguments and the imagery of the Tea Party? I'm sorry to have more questions than answers right now, but I'm inspired nonetheless.