The 8 keys to survival for runaway legislators 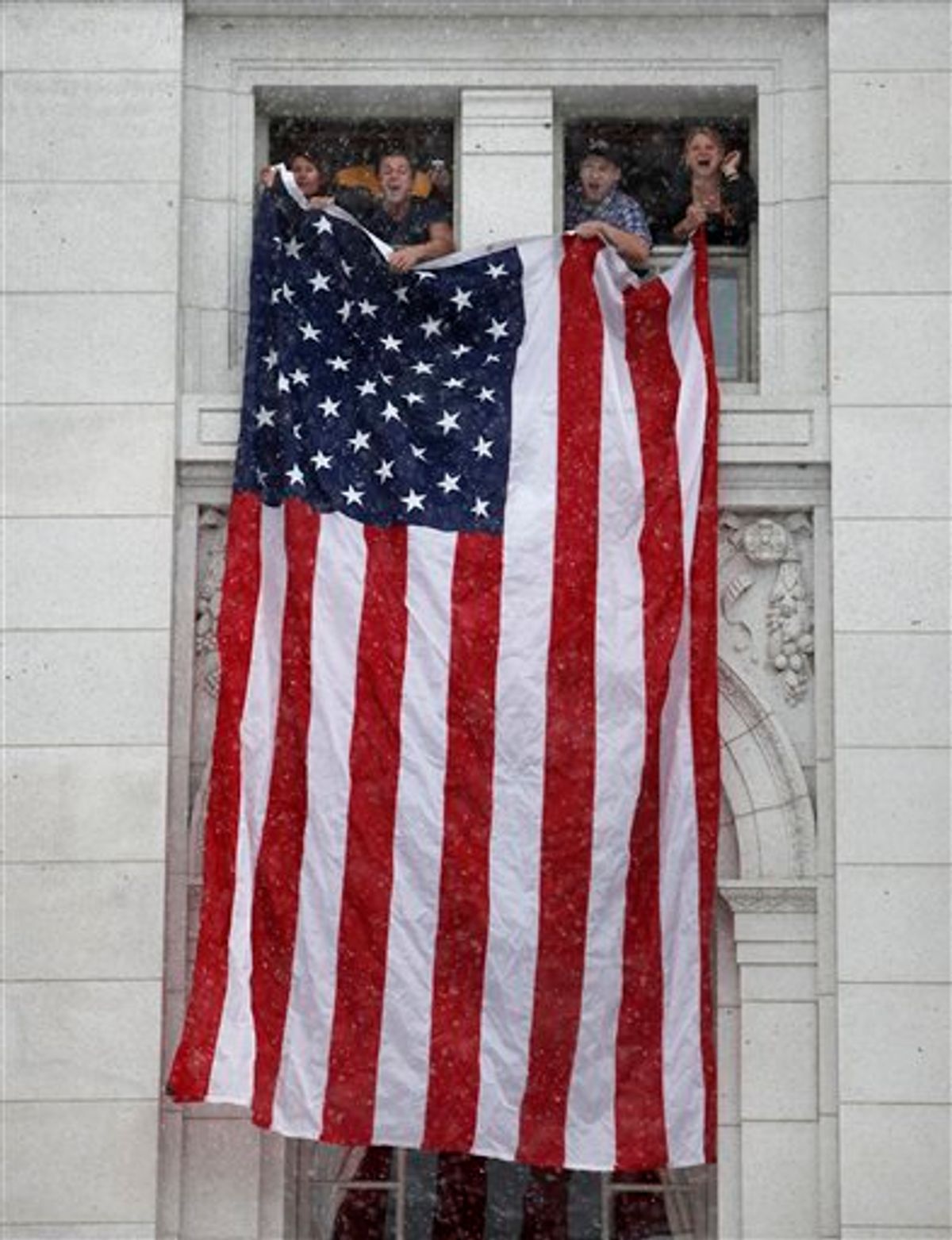 The future of American unions might come down to a game of political chicken. Unmoved by historic demonstrations against it, the Wisconsin state Assembly passed Gov. Scott Walker's union-busting bill last Friday amid raucous protests by Democratic lawmakers. Now, all that's preventing public sector workers in the state from losing their right to bargain collectively are the 14 Democratic state senators holed up across the state line in Illinois. If just one of them cracks -- or slips up and is caught returning to the state and compelled to come to Madison -- Walker's Republicans will have the quorum that has eluded them these past two weeks, and the bill will become law.

To understand what these senators are up against, we turned to four people who've been in the same spot before:  Texas state Sens. Leticia Van de Putte, Rodney Ellis and Mario Gallegos and political consultant Harold Cook. In 2003, they fled to Albuquerque, N.M., with their fellow Democratic senators to prevent Tom DeLay's notorious mid-decade redistricting plan from passing. While their fight ultimately ended in federal court, their holdout lasted an impressive 46 days. From their experiences, we can offer the following eight tips for Wisconsin's Senate Democrats:

1. Watch your back and use the buddy system

Gov. Walker may have ordered state troopers to make a few house calls, but it could get worse: DeLay and his fellow Texas Republicans employed multiple federal agencies and offices in the hunt for the Texas 11. "What was very tough was the racial and ethnic batterings that some vicious emails had," Van de Putte remembers. "And stuff that was slipped under our hotel doors. It was terrible. Oh god, it was terrible." Conservative hecklers banged on the senators' doors at 3 in the morning, she says (something that has already happened to their Wisconsin counterparts), and her family in Texas believed that the DPS was watching their house.

"There were stories of bounty hunters," Ellis recalls. "I mean, I don't know if it was true, but there were rumors."

The Texans' advice? A thick skin and a buddy system. Political alliances within the state where you're hiding helps too. An avid cyclist, Ellis biked 10 miles every morning in New Mexico. He and Sen. Shapleigh avoided going out alone. "I would have these labor guys going with me," he says. "You know, what if somebody had grabbed one of us and just taken us across the border? That was all you'd have to do."

Because of the stakes, Cook, the political consultant, says it was crucial for them to work as a team. Living together is essential. "If you are not all together in the same place, it makes it very much more difficult," he says. "You need to be in the same place so you can look in the eyes of those who've broken the quorum with you, so you can measure their level of commitment, while they look you in your eye so they can measure yours."

Each of the Texas 11 was given a different job. One senator handled messaging and interviewing. Another handled the group's legal strategies. Some of the jobs were odder than others. "Sen. Lucio ironed the best, and it kept him busy," says Van de Putte. Lucio and another senator also did the group's personal shopping, before returning to the hotel for group dinners and prayer.

"It was one of the hardest things they've ever done as state legislators," Cook says. There was the emotional toll, the political risk. "When those legislators are leaving town, among the things that are going through their minds is that somebody might lose because of this. And the problem with that? Nobody knows who is going to lose."

Breaking quorum is a controversial move; at worst, critics of the tactic see it as a shirking of political responsibilities. "They'll try to portray you as someone not on your job, to drown out the message that you're trying to put out," says Ellis. To counteract those assumptions and continue representing your district, it's important to keep in touch with constituents.

E-mailing helped the Texans, and videoconferencing came in handy.  Gallegos recommends that Wisconsin state senators hold town hall meetings by phone; that service wasn't widely used by politicians in 2003, but the Texas 11 did something similar. To show their support, the AFL-CIO staged a rally in Austin. At the rally, organizers propped up large portraits of each missing senator on the steps of the Capitol building; next to each picture was a teleconferencing phone, connected to a loudspeaker. The senators used the technology to talk to the crowd directly and answer questions.

"It was just unbelievable," Gallegos remembers. "I'd tell them [the Wisconsin senators] to do that. It gives you -- it gave me -- obviously a boost, and gives added comfort to the folks that believe in you back home."

To make ends meet, the Texas 11 initiated a fundraising campaign on both a local and national level, something that the Wisconsin Democrats have started to do as well. Constituents back home donated what they could. "I mean, I got $5 and $10 checks from constituents," said Van de Putte. "We got cookies. We got chips and salsa." The senators also ensconced themselves in their adopted community in Albuquerque, and received aid from local New Mexican groups. Union members donated fax machines and office supplies. Local veterans and college professors would invite them to dinner for home-cooked meals.

As the quorum break continued, the Texas 11's fundraising became national in scope. Senators flew to Philadelphia, New York and areas of Colorado to ask for donations. Nancy Pelosi held a fundraiser in Washington, D.C. Toward the end, Ellis flew to the Bay Area and met with the organizers of MoveOn.org at their home. According to Ellis, the group raised about $1 million for the Texas 11 in three or four days.

Because of this, legislators who break quorum are dependent on the traveling press to get their message out -- and media attention tends to be fickle. To retain media interest, the Texas 11 took turns conducting daily morning press conferences. Interviews on talk radio and visits to high-profile cities also helped. "In our case, toward the end, we were contemplating making the move to Washington D.C.," says Ellis. "[In] Albuquerque -- as great as a city as it is -- it was not as easy to keep the press's attention."

Then there were the gimmicks. "We got really imaginative," Cook says with a laugh. "It was like made-up news. We had shirt-ironing contests between senators -- I mean, that's how bad it got. Anything where they could just file a story at the end of the day."

"How do you explain exile [to your children]?" Ellis says. "All they know is it's bad enough when dad's in the Legislature but at least I come home on the weekends. And then I'm just gone."

The solution? Skype calls and out-of-state visits. Lots of them. Van de Putte jokes about arranging conjugal visits for her colleagues, and most of their families managed to visit Albuquerque during the duration of the quorum break. On a weekend trip to visit his wife and newborn daughter at his in-laws' place in Georgia, Ellis flew up to Minnesota first, then New Orleans, and then Atlanta, to avoid entering Texas airspace. Van de Putte planned to visit her husband while he was on a business trip in Colorado Springs, but camera crews and conservative hecklers made getting to the airport a challenge. A costume came in handy.

"There was no privacy," she says. "So how do I get out? I went where the hotel maids are, and I put on a uniform, and I left together with all the other ladies that looked just like me -- Hispanic and a little chubby!"

Ostensibly, breaking quorum is a maneuver that forces opposing parties to compromise. When that doesn't happen, they are rarely politically effective in and of themselves. The quorum break becomes a form of political protest -- "it's basically choosing which hill to die on," Van de Putte says -- which could turn public opinion against your opponents. Or, more effectively, it can become a stall tactic, giving the minority party time to enact a Plan B.

In the case of the Texas 11, the senators hoped to stall the bill in question long enough for it to be struck down in federal court. The Democrats lost their case, but a similar one made it all the way to the Supreme Court. In 2006, elements of the bill were ruled unconstitutional, and struck down.

The moral of the story? "Have an exit strategy," Van de Putte advises. "Always know when and how to come home."

The Texas 11 are overwhelmingly supportive of their Wisconsin Democrats. "They've got this dialogue going about balancing the budget," Cook says of Walker and his GOP allies, "and in the name of that they get to victimize people, and I just don't think that's right. And I strongly support the Senate Democrats for basically concluding, 'Up with this shit we will not put.'"

"When you're boxed into that corner, you've got to engage," adds Gallegos. "So I would say good luck, and let's see what happens. Because we've been there."