Libya rebels gird for fight in city near capital

The battle for control over the north African nation intensifies 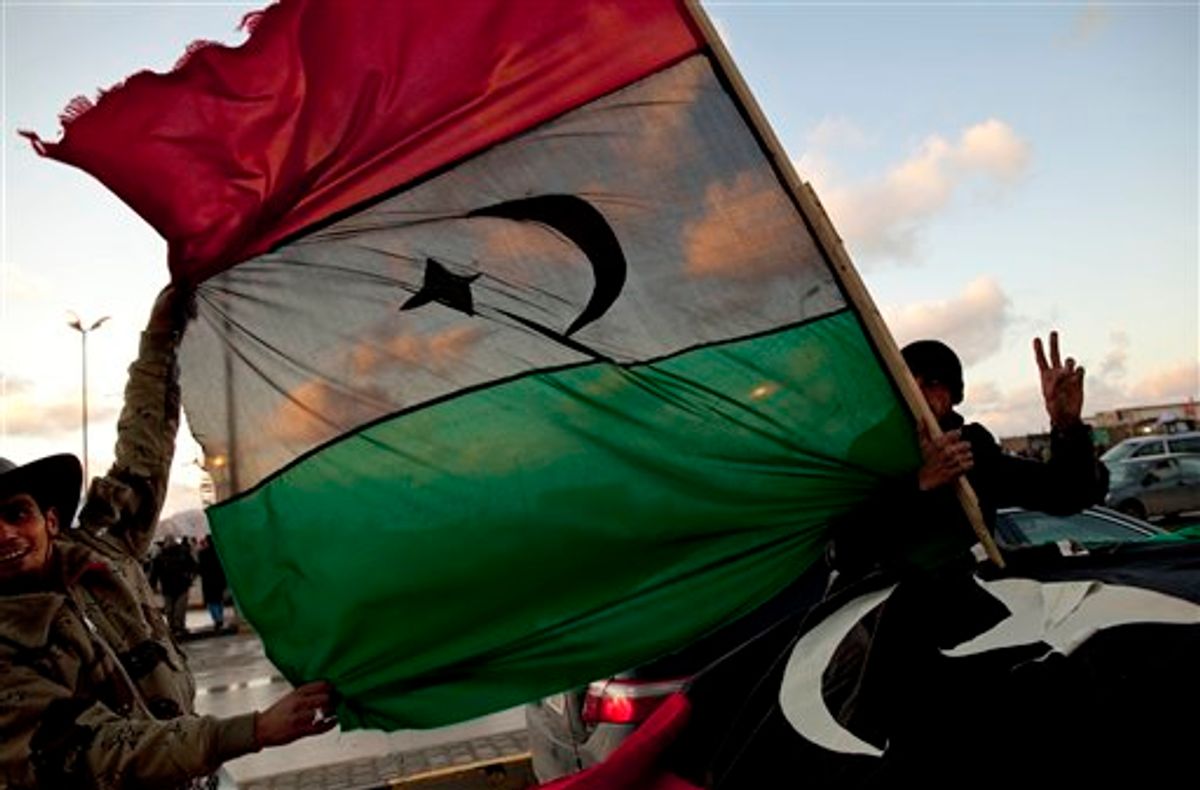 Hundreds of armed anti-government forces backed by military defectors who control the city closest to the capital Tripoli prepared Sunday to repel an expected offensive by forces loyal to Moammar Gadhafi surrounding Zawiya.

"We want him to leave," she told reporters traveling with her Sunday to a U.N. meeting on Libya planned for Monday. "We want him to end his regime and call off the mercenaries and forces loyal to him. How he manages that is up to him."

Gadhafi's son, Seif al-Islam, claimed again that the country was calm and denied the regime used force or airstrikes against its own people. But human rights groups and European officials have put the death toll since unrest began in Libya nearly two weeks ago at hundreds, or perhaps thousands, though it has been virtually impossible to verify the numbers.

There were no reports of violence or clashes on Sunday.

Gadhafi has launched by far the bloodiest crackdown in a wave of anti-regime uprisings sweeping the Arab world. The United States, Britain and the U.N. Security Council all imposed sanctions on Libya over the weekend. And President Barack Obama said it is time for Gadhafi to go.

The regime, eager to show foreign reporters that the country is calm and under their control, took visiting journalists to Zawiya, 30 miles (50 kilometers) west of Tripoli on Sunday. However, the tour confirmed the anti-government rebels are in control of the center of the city of 200,000. They have army tanks and anti-aircraft guns mounted on pickup trucks deployed.

On the outskirts of the city, they are surrounded by pro-Gadhafi forces, also backed by tanks and anti-aircraft guns.

There were at least six checkpoints controlled by troops loyal to Gadhafi on the road from Tripoli to Zawiya. Each checkpoint was reinforced by at least one tank, and the troops concealed their faces with scarves.

"To us, Gadhafi is the Dracula of Libya," said Wael al-Oraibi, an army officer at Zawiya who joined the rebels. He said his decision to defect was prompted in large part by the Libyan leader's use of mercenaries from sub-Saharan Africa against the people of Zawiya.

A key city close to an oil port and refineries, Zawiya is the nearest population center to Tripoli to fall into the opposition hands. Police stations and government offices inside the city have been torched and anti-Gadhafi graffiti was everywhere. Many buildings are pockmarked by bullets.

The mood in the city was generally upbeat, but the anticipation of a renewed attempt to retake the city was causing some anxiety among the rebels.

Meanwhile, in eastern Libya, the cities under the control of the rebels announced the formation of a new National Transitional Council to govern their affairs, shooting down an earlier bid by former Justice Minister Mustafa Abdel-Jalil to form his own provisional government with himself as the head.

U.S. Senator Joe Lieberman, speaking on CNN's "State of the Union" Sunday, said Washington should arm the provisional government in rebel-held areas of eastern Libya "to fight on behalf of the people of Libya against a really cruel dictator." Lieberman, an independent, also proposed imposing a no-fly zone over the east to stop forces loyal to Gadhafi from attacking.

Speaking on the same program, Republican Senator John McCain suggested that U.S. warplanes are used to enforce the no-fly zone and that Washington recognizes the government in eastern Libya.

Gadhafi's son Seif al-Islam denied in a TV interview that his father's regime used force or airstrikes against its own people.

"Show me a single attack. Show me a single bomb," he told ABC's "This Week," according to a transcript. "The Libyan air force destroyed just the ammunition sites. That's it."

Seif al-Islam is the most visible of Gadhafi's children and has since the anti-government protests broke out nearly two weeks ago been acting as a spokesman for the regime.

Asked about Obama's call for his father to step down, he said: "It's not an American business, that's No. 1. Second, do they think this is a solution? Of course not."

As for the U.S. freeze of Libyan assets, he said: "First of all, we don't have money outside. We are a very modest family and everybody knows that."

"Gadhafi Out," chanted hundreds in Zawiya's city center on Sunday. The charred skeletons of many cars littered the city and most streets were blocked by palm tree trunks or metal barricades. "Free, Free Libya," chanted members of the anti-government forces at the city center.

"Down with Gadhafi, the mass murderer," read graffiti scrawled in the city. An effigy of Gadhafi hung from a light pole in the city's main square. On its chest the words "Execute Gadhafi" were emblazoned.

The square has now become the burial place of six of 11 rebels killed by pro-Gadhafi forces Thursday when they attacked the area to try and dislodge them. Residents reported several skirmishes between the two sides since Thursday.

"We are all wanted," said one rebel at the square who did not want to give his name for fear of reprisals. "Zawiya in our hands is a direct threat to Tripoli."

Rebels from the town and army forces who defected from the regime to join them largely consolidated control of the town on Feb. 24, after an army unit that remained loyal to Gadhafi opened fire on a mosque where residents -- some armed with hunting rifles for protection -- had been holding a sit-in.

About 20 miles (30 Kilometers) west of Zawiya, some 3,000 pro-Gadhafi demonstrators gathered on the coastal highway, chanting slogans in support of the Libyan leader.

Before Zawiya fell to rebel forces, Gadhafi scolded the city residents on Thursday.

On Feb. 24, local forces repelled an attempt by militiamen and pro-Gadhafi troops to take back the town.

Later, Gadhafi's son, Seif al-Islam, acknowledged to foreign journalists in Tripoli that there were "two minor problems" in Misrata and Zawiya. There, he said, "we are dealing with terrorist people," but he hoped to reach a peaceful settlement with them.

Gadhafi loyalists remain in control of nearby Tripoli, which was reported to be quiet Sunday, with most stores closed and long lines outside the few banks open for business.

But one resident said Tripoli's calm may be deceptive.

"The situation is being constructed to look natural, but it is not," said a 40-year-old Tripoli businessman who did not want to be named for fear of reprisals. "People are scared and they are waiting for the fall of the regime. People are scared to go out or to gather because some areas have been taken over by armed groups loyal to the regime."

Another Tripoli resident, a 21-year-old Libyan-American who only wanted to be identified by her first name, Rahma, said the city was deserted on Sunday. "No one is driving around, no one is out in the streets."

Her aunt, she said, went to a funeral Sunday and came back to tell the rest of the family that there were checkpoints run by pro-regime forces across the city.

A doctor in Libya's third-largest city Misrata, 125 miles (200 kilometers) east of Tripoli, said residents retrieved two more bodies of those killed during fighting with pro-Gadhafi forces near the city's air base on Friday.

The two bodies raise to 27 the death toll from the fighting. About 30 residents who took part in the battle remain unaccounted for, said the doctor who spoke on condition of anonymity because he feared reprisals.

Associated Press reporters Ben Hubbard and Bassem Mroue in Cairo and Bradley Klapper in Geneva contributed to this report.

(This version CORRECTS that Lieberman is an independent).)