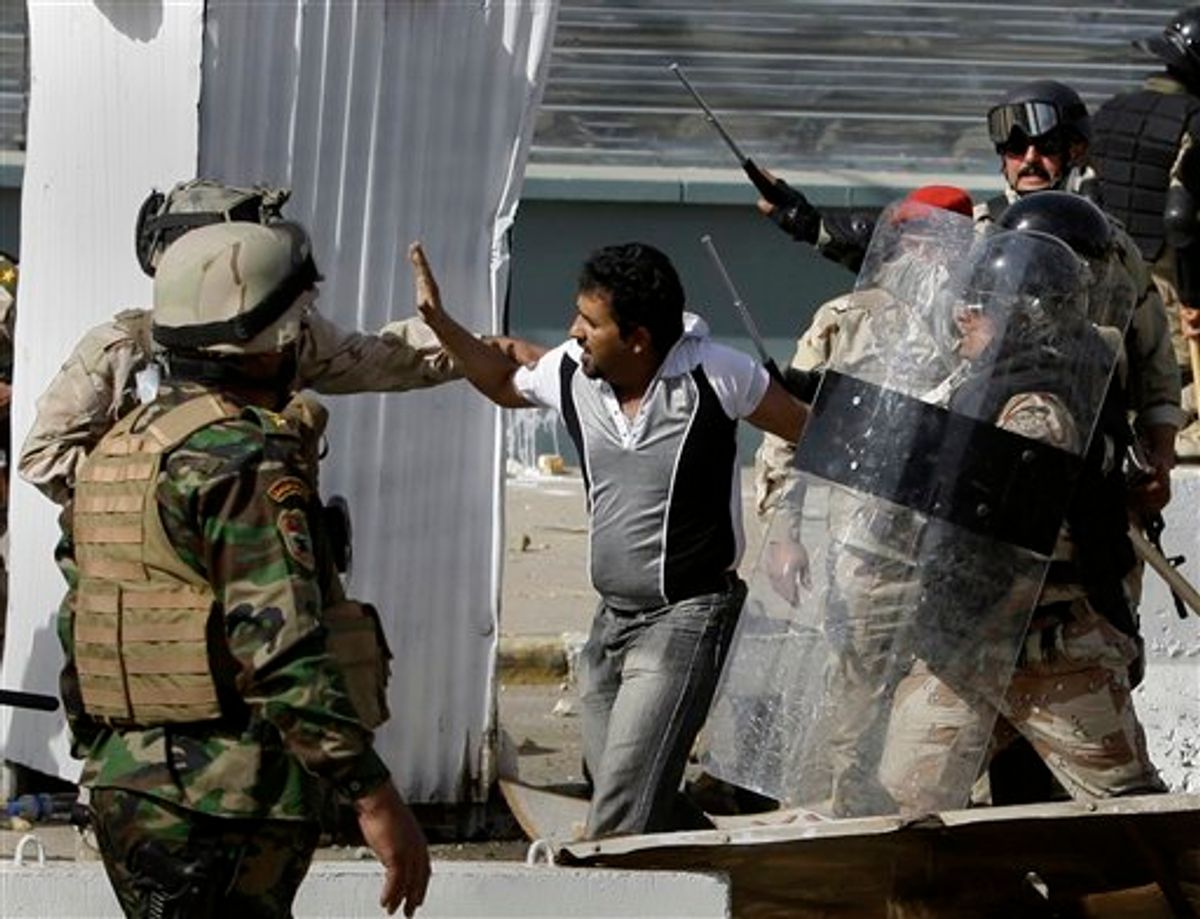 Iraqi police arrest a protester during a demonstration in Baghdad, Iraq, Friday, Feb. 25, 2011. Thousands marched on government buildings and clashed with security forces in cities across Iraq on Friday, in the largest and most violent anti-government protests here since political unrest began spreading in the Arab world several weeks ago. (AP Photo/Hadi Mizban) (AP)
--

We saw it with Yemen, and now we're seeing it again with Iraq: The Obama administration is conspicuously quiet when friendly Middle East regimes use ugly tactics -- including violence and imprisoning peaceful demonstrators -- to quell growing protest movements in their countries.

That's in marked contrast to the administration's tough stand when similar tactics are employed by unfriendly governments like the one in Iran. In a statement yesterday, the White House "strongly condemn[ed] the Iranian government's organized intimidation campaign and arrests of political figures, human rights defenders, political activists, student leaders, journalists and bloggers."

But in one of the least-noticed stories of the week, the U.S.-backed government of Nouri al-Maliki in Iraq has resorted to imprisoning 300 journalists, intellectuals and lawyers in order to stop ongoing protests, according to a well-reported Washington Post dispatch from Baghdad.

The Post story reports that about 30 people have been killed -- at least some of them gunned down by government forces seeking to disperse protests. And the imprisoned dissidents are not being treated humanely, according to one journalist who was detained:

Just before they were freed, however, Hadi was held in a room where about 300 people sat on the floor. They had black hoods over their heads. Many were groaning, their shirts bloodied. Some wore suits and ties. An elderly man had passed out. Hadi recognized a friend, a TV broadcaster, among them.

As far as I can tell, there has been no public response from the administration to what's happening in Iraq. Yesterday I reached out to State Department spokesman P.J. Crowley to see if the administration has any comment. I will update this post if I hear back. It's also worth noting that the administration has a lot more real sway with Iraq -- where there are still tens of thousands of American troops posted -- than with many of the other countries in the region.