When I was Michigan's state treasurer, we won major concessions from state employees -- by working with their union 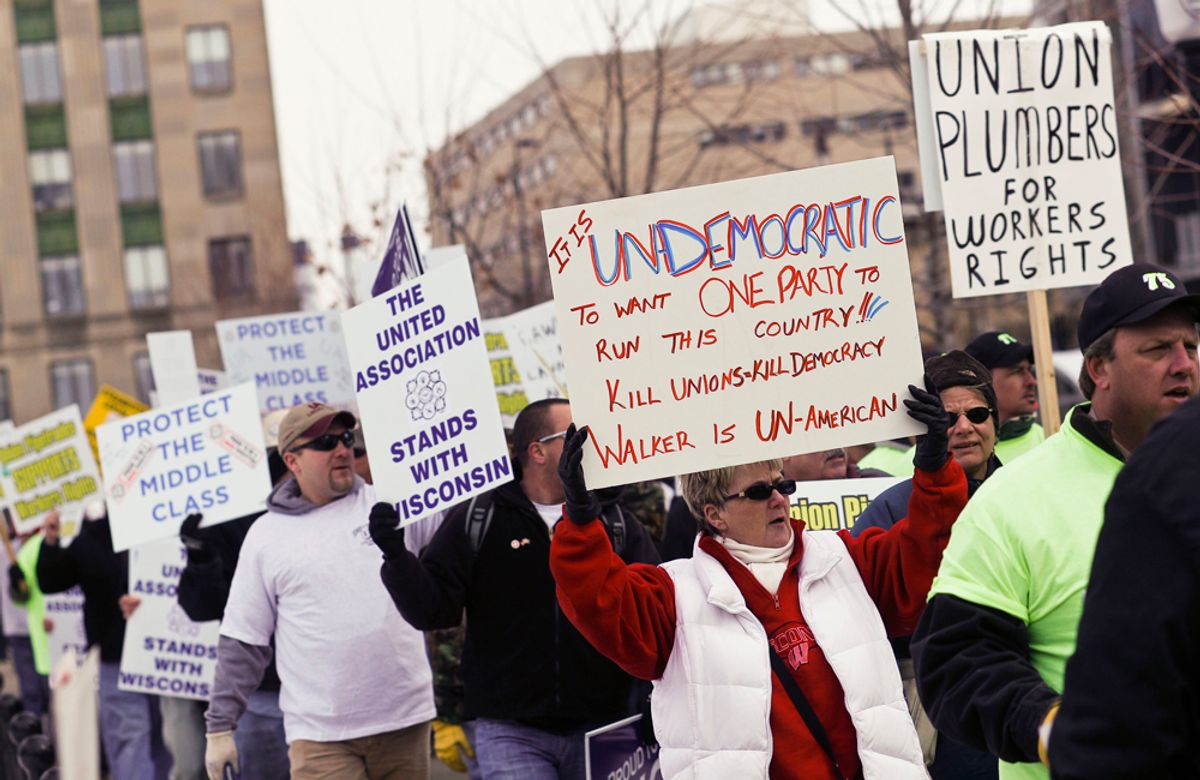 Protesters march around the Capitol Square in Madison, Wis., Friday, Feb. 25, 2011, over the governor's proposed budget. Protests to the governor's bill to eliminate collective bargaining rights for many state workers are in their 11th day. (AP Photo/Andy Manis) (Andy Manis)
--

As a former state treasurer of Michigan, I oversaw the finances of a state whose economic problems are even worse than those of our next-door neighbor, Wisconsin. Yet last year, we were able to enact legislation reduce pension benefits for school employees and require employee contributions for retiree heath care, without threatening to take away collective bargaining rights.

In 2010, budget problems brought on by the recession forced us to ask for concessions from state and school workers. Specifically, we needed to reduce our future liabilities for retiree health care and school employee pensions At the beginning of the decade, the pension system had been over 100 percent funded. After ten years of reversals in the stock market, it was down to 80 percent.

Our governor, Jennifer Granholm, told the teachers union the state could no longer afford a pure defined benefit plan for new school hires, in which the state is responsible for an employee’s entire retirement fund. Nor could we afford to allow teachers to retire at age 55 with a pension based on the average of their last three years’ salary.

The teachers recognized that Michigan was in financial straits and that changes had to be made. We were willing to compromise, too. After discussions with the union, the legislature passed a plan for new hires that raised the retirement age to 60 (we'd wanted 65), based pensions on the last five years' salary (we'd wanted nine), and required teachers to contribute 3 percent of their pay to retiree health benefits. In exchange, the state is contributing 1 percent of teachers’ salaries to a 401(k) each year.

In the end, we got a fair deal that saved Michigan millions of dollars, with potential savings of billions if the 3 percent contribution for retiree health benefits is ruled constitutional.

One thing we never considered was ending teachers' collective bargaining rights. Michigan is a strong union state. If we had tried that tactic, Lansing would have been just as chaotic as Madison has been these past few weeks. Beyond that, it's good policy to allow teachers, police officers and firefighters to sit down at the table and work out agreements with their employers. If you treat public employees well, you get good public service in return.

Governor Granholm is a Democrat, so she wasn’t going to attack union rights. But in 1997, Republican Governor John Engler and an all-Republican legislature made similar changes to the pension system for state employees, without trying to take away collective bargaining. Our new governor, Rick Snyder, is also a Republican. He’s asking state employees for $180 million in concessions, but he’s a practical businessman who understands that stripping workers of their rights will ruin labor relations in Michigan.

We didn’t need to take an adversarial stance toward unions to strike a pension reform deal. If Governor Walker had followed Michigan’s strategy, he would have an agreement with Wisconsin’s public employees by now. Public employee unions realize the states are in financial trouble. In Wisconsin, they've already agreed to most of Walker's financial demands.

And yet, Walker is intent on taking advantage of the economic downturn to do away with labor rights and repeal 100 years of legislation enacted to help workers and low-income individuals. It might be a good ploy to get concessions for the unions, and it may help him in the short run, but it’s going to ruin him in the long run.

If Scott Walker were a good leader, he could figure out a way to negotiate with his employees and save Wisconsin money without eliminating collective bargaining. The fact that he would rather dictate his own terms shows he doesn’t know how to run a state. Good government depends on good relationships with workers. If Walker wins his struggle with the unions, he'll inevitably end up complaining that government is inefficient and state employees are lazy, even though he will have caused those problems by destroying the morale of his workforce.

I believe Governor Walker has poisoned labor relations for years to come, ensuring the failure of his administration. Compromise is not a dirty word. It is an integral part of politics and the collective bargaining process. Anyone who thinks otherwise should not be in politics or in a leadership position. As Edmund Burke said, "All government, indeed every human benefit and enjoyment, and every prudent act, is founded on compromise and barter."

Over the past two years, I have given several speeches warning about the threat of income inequality to our democracy. Michigan has lost 850,000 jobs in the last decade, almost all due to the decline in the domestic auto industry. Our state has slid from the top ten in per capita income to 37th. The auto industry and the unions helped create the middle class in Michigan. Now, that’s pretty much gone. Real incomes for the average American have not risen in 30 years. Almost all the economic gains are going to the top one percent.

Ironically, some economists believe that income inequality contributed to the financial collapse that’s causing Governor Walker to claim his state can no longer afford public employee unions. Since middle class incomes were stagnant, the only way the average American could spend was through borrowing. People used their houses as ATMs, and became overextended financially. As the super-wealthy began looking to stash their swelling incomes in more lucrative investments, financiers created mortgage-backed securities and collateral debt obligations. The whole system fell apart, and now Governor Walker is exploiting the crisis to reduce government spending and take away benefits from public workers, which will further erode the middle class.

The phrase "class warfare" means you can’t complain if the rich get everything. As Supreme Court Justice Louis Brandeis once said, "We can either have democracy in this country, or we can have great wealth concentrated in the hands of the few, but we can’t have both."

Governor Walker’s misguided proposal to balance his state’s budget is pitting middle-class workers against the government, against public sector workers, and even against each other. If Governor Walker and his Tea Party allies have their way, they’ll destroy America’s social safety net. We're seeing in Wisconsin how this has the potential to tear the country apart.