Anne Hathaway's co-host spent last night in a daze. What was he thinking? Let this short story explain 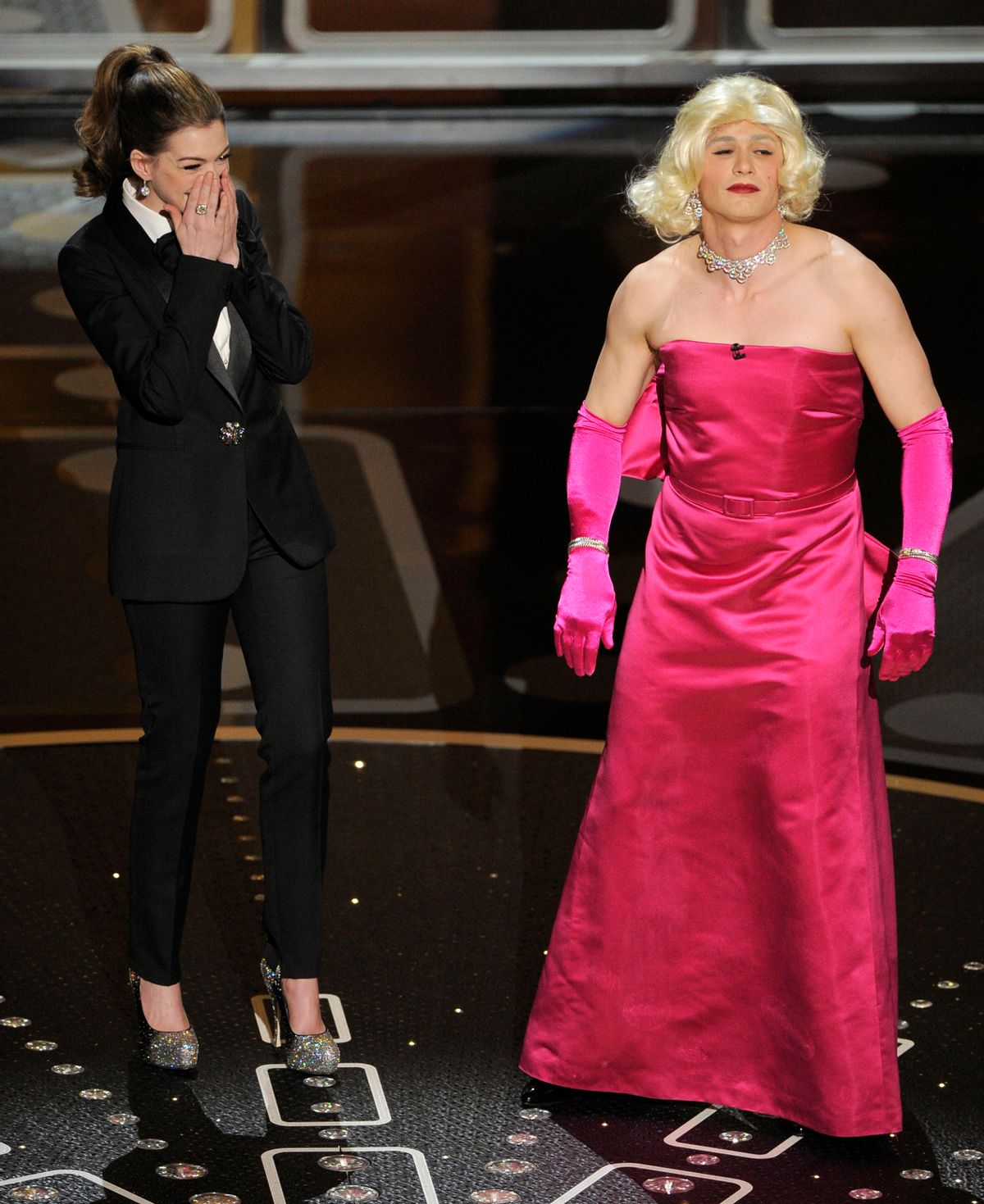 "The Color of Beige"

A Short Story by James Franco

James Franco had a feeling this Oscar hosting gig was a bust when he ambled onstage dressed as Marilyn Monroe and the crowd at the Kodak Theater took entirely too long to register that it was him. And when they did figure it out -- somewhere around the time that Franco said, "I just got a text message from Charlie Sheen!" -- they just sort of tittered politely.

The fact that Franco, the young, studly, intellectual actor-artist-filmmaker-short fiction writer who won an Emmy for playing James Dean and was up for a best actor Oscar for  "127 Hours" during that very telecast, was abasing himself for a laugh -- well, that was supposed to be, if not the joke, then part of the joke.

But it was a non-starter. Why?

Maybe the problem was that Franco was going for a young, hip, meta-star approach, and making a joke of the very idea of drag by just standing there next to his co-host, Anne Hathaway (whose daffy-slice-of-cheesecake thing was at least good for a smile),  and the crowd got that, but didn't think it was funny.

Or was the problem that, even with an Oscar nomination and an appearance on "Inside the Actor's Studio" and a slew of magazine stories about the postmodern phenomenon of James Franco, the industry represented in the Kodak Theater still didn't have a strong impression of Franco himself, hence no basis from which to find the idea of Franco in drag funny? Or perhaps the ghost of a dead, real movie star, Marilyn Monroe, just sort of absorbed a present-tense virtual star the way a sponge absorbs water.

No matter. In retrospect the Monroe bit was where it all went south for Franco -- the point where he checked out of the telecast and got lost in his own head, thinking stuff like: OK, so, this whole "James Franco and Anne Hathaway are going to draw younger viewers to the Oscars" strategy is a bust because a) we're not really big stars yet and we both kind of suck at hosting, especially me, and b) the first part of the telecast is loaded with stuff about Hollywood's past anyhow, which would have driven younger viewers away even if Anne and I were better known and didn't kind of suck, especially me, and c) Wow, look, Kirk Douglas is totally killing in his supporting actress intro just by futzing around and doing that 'Look at me, I'm an old guy and I had a stroke and I can barely talk, but watch me charm the hell out everybody and flirt with Anne and draw out the suspense before I read Melissa Leo's name off the little card' routine. He probably does that at family gatherings, too.

Watching Leo accept the award and get big laughs just by being herself -- still riding that I'm-just-an-uncouth-girl-from-the-neighborhood thing as far as it would take her; casually dropping an f-bomb because that's what the crowd expected Melissa Leo to do -- was nearly as much of a revelation to Franco as Kirk Douglas' appearance. The crowd was engaged by Leo in a way they were not engaged by Franco. That was because Leo -- and all the other winners, and some of the people doing introductions and just reading stuff off Teleprompters, and even Gwyneth Paltrow, who looked like she'd just risen out of a pool of bronzer like Martin Sheen at the end of "Apocalypse Now" -- were actually on the show, not floating somewhere above it and regarding the whole crazy carnival with numbed amusement.

As the evening wore on, Franco's thoughts became more jumbled and self-flagellating:

Maybe hosting a show isn't as easy as I thought it was going to be.

Maybe I can't do it while tweeting and taking photos and making videos backstage. Maybe I should have focused on the actual hosting part a little more. Or at all.

I suck at this. Why did I agree to do it? Oh my God -- look at me there on the monitor -- Anne is doing that lovable manic thing, pouring it on five times harder than she needs to. Why? It's because I'm standing right next to Anne and I'm barely doing anything, and she's overcompensating.

I am practically dead on-screen.

Look at me! Kids' action figures are more expressive. I should at least smile!

At which point Franco would will himself to smile, and it would come out a wince.

If this evening could be summed up as a color, it would be beige. A color so dull you can't even muster an opinion on it.

At some point in the evening, which ran about four hours but felt like four days to James Franco, eight-time Oscar host Billy Crystal came out onstage to pay tribute to Bob Hope, who hosted the very first televised Oscar ceremony in 1953 -- and that was the end for Franco's investment. All hope was lost, as they say.

Franco always enjoyed Crystal. He had fond memories of watching Crystal host the Oscars back in 2000 over at Seth Rogen's house when "Freaks and Geeks" was on the air. Crystal was so damned funny, such a cheeseball on roller skates with his parody show tunes and ad libs, that for about an hour he and Rogen totally forgot to do bong hits.

But until tonight, Franco had never thought of Crystal as someone to emulate. He was too self-consciously old school, too much a living link to vaudeville. Tonight the wisdom and purity of Crystal's clowning crystallized in Franco's head and made him feel ashamed of himself for not caring more about this job that he thought was so beneath him.

People in the Kodak Theater loved Crystal and were obviously glad to see Crystal. Hell, they were relieved to see him.

Suddenly it hit Franco: This is show business. It's not about you, or your relationship to this or that. It's about entertaining people.

Crystal always got that, and so did Bob Hope. That "Passover" joke was 59 years old, and Hope delivered it via videotape enclosed in a virtual bubble that made him look like one of those heads in a tank on "Futurama." Yet it still killed.

Franco thought, Look at Crystal grinning like he knows he's saving the evening, or at least temporarily bringing back from the dead. Smug bastard.

Then he heard the crowd laugh and thought, Well ... He's not wrong.

Could anything have saved this night? Franco pondered that while riding in the limo on the way to the after-parties, lighting a spliff full of Pineapple Express rolled by Rogen himself and leaning his head against the window and watching the streetlights glide overhead.

He'd been watching Oscar telecasts since he was a little kid -- first as a family ritual, then as a "Hey, we're above all this and we're gonna goof on it" high school-and-college thing, and then in his 20s, for professional reasons. Even though Franco was on the show and distracted by a million different cues and responsibilities, somehow he knew in his bones that this was one for the record books -- maybe the most boring Oscars since he'd started watching them, and very possibly the most boring Oscars of all time.

This was partly because it ran 40 minutes over and all the movies that Franco personally enjoyed and kind of fantasized about having been in (apart from "127 Hours," which he actually was in) got mostly shut out, too. David Fincher and David O. Russell and Darren Aronofsky weren't young pups; they'd been around for 15 years or more and had done really interesting work, even if Franco didn't necessarily love all of it. Yet here came "The King's Speech," an unbuttered scone as major motion picture, out of nowhere to claim what seemed like every award in sight. There was no "youth appeal" to speak of among the winners, unless you count Natalie Portman winning best actress for "Black Swan" or Christian Bale, aka the Dark Knight, winning best supporting actor for playing a crackhead, and cracking wise at the expense of his image as a belligerent freak and graciously trying to hustle up money for Dicky Eklund, the real-life person he played in "The Fighter." From 74-year old "King's Speech" writer David Seidler reminding viewers he was the oldest guy ever to win that trophy and reveling in it, to Aaron Sorkin yammering like a 1930s screwball comedy character during his best adapted screenplay acceptance speech (proudly doing his own personal shtick, like Melissa Leo and Christian Bale, shtick that was a lot more basic and accessible than Franco's multivalent abstract performance art), the evening felt very old.

But in the end, maybe nobody of any age cared about the demographic strategy as long as it was a good show.

And it wasn't. Maybe as an overreaction against Ricky Gervais' two funny but abrasive stints hosting the Golden Globes, the telecast had been stripped of anything potentially off-putting, much less offensive. What was left felt too much like an episode of a kids' TV variety show that just happened to be hosted by a couple of adults, with Franco and Hathaway performing as glorified ingénues, hustling here and there and beaming like they just passed the audition.

Or maybe, Franco thought gloomily, returning to the worst-case scenario, the problem was him.

Maybe if Franco had supported Hathaway more, if he'd given more of a damn -- if he hadn't looked distracted half the time and pained the other half; if he'd roused himself to display the smarmy but irresistible energy that Crystal brought to his sole brief appearance, or that Hope radiated from beyond the grave -- maybe Franco wouldn't be standing there on the precipice of infamy, about to be reviled as the guy who sucked worse than Letterman and Whoopi, the yutz who made the Oscars even more boring than they might have been already, just by being his "Am I really there or not?" self, the handsome Mr. Cellophane.

Maybe, Franco thought, there's more to entertainment than just being in the room. Maybe performance is more than a concept to be explored via metafiction and academic jazzing-around. Maybe you just plant your feet and say your line with some energy and try to connect with the audience and hope it works. Maybe it's as simple as flipping a switch: Decide to give a damn and you give a damn, and the audience does, too.