Two weeks ago, the world decried my husband and his fellow teachers. Now, I sense the mood shifting 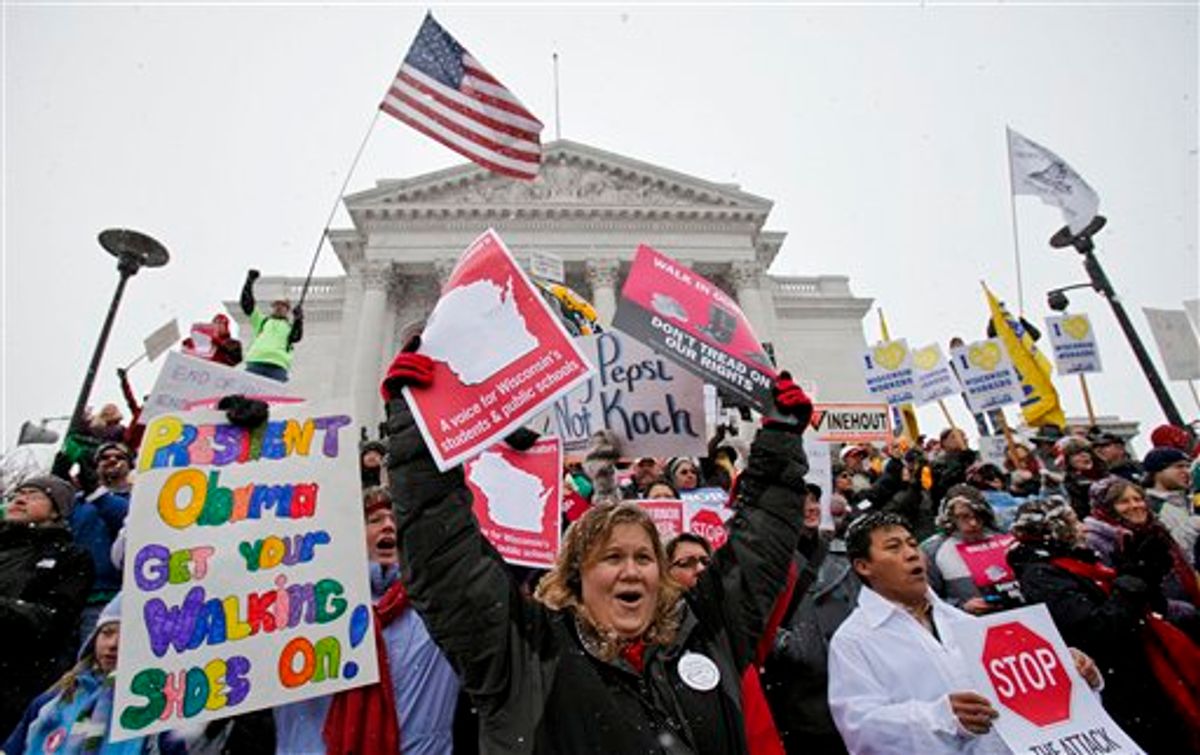 Teacher Kristen Henningfeld, center, of Elk Mound, Wis., protests on the steps of the state Capitol in Madison, Wis., Saturday, Feb. 26, 2011. Protests to the governor's bill to eliminate collective bargaining rights for many state workers are in their 12th day. (AP Photo/Andy Manis) (AP)
--

Has the tide of public sentiment in Wisconsin reached a turning point?

Yesterday, we loaded up the kids and drove over to Kilkarney Golf Course in River Falls, Wis. We joined hundreds of protesters whose cars lined the road for well over a mile. We would have drawn a much bigger crowd if it had been warmer than 10 degrees. We greeted Republican lawmakers with signs and chants as they came to dine together. Gov. Walker and Republican Sen. Sheila Harsdorf -- who is growing shaky about her vote -- were scheduled to arrive. They never showed. I don't blame them -- that would have played out horribly on the news.

The impeccably dressed lawmakers drove very nice cars. Their flashy Cadillac SUVs and Lexuses drew jeers from the protesters. About a dozen other cars arrived carrying teenage or 20-something drivers who were presumably there to serve the large group of politicians. One lawmaker was furious about having to maneuver her car around folks to get into the driveway. When she was safely by, she pulled up a sticker from her lap that read "Scott Walker." The crowd booed her loudly and began chanting "Hey, hey, ho, ho, Scott Walker's got to go!"

An ex-sheriff showed up and tried to intimidate the crowd. This man was in his late 50s, overweight, hair slicked back and outfitted in a too-tight-fitting ranger-looking suit. He walked up and down the road filming every single protester.

He announced, "It's a free country for now!" and smirked while recording "evidence."  He seemed like a Walker crony. It was very creepy and his presence ignited the crowd. One man yelled very loudly, "You don't intimidate us!  Take notes!  You are only adding to your enemy list!"

The sheriff froze for several seconds, and stared the man down. I thought a fight might erupt but the sheriff just smirked. He stopped filming after that.

Later, I was standing by our running car while the boys were warming up inside. I holding my sign "Stand by workers, not by party" when a young man flipped me off as he drove on by. I'm not sure if he was a governmental aid or a golf course employee.  Anyway, a local police officer immediately stopped him when he gave the middle finger to some other folks. The cop pounded on the hood of his car and promptly ticketed him to the cheers of the crowd. The police were clearly on our side. A local group of firefighters were also protesting with us. It felt like a true community had come together.

Four hours south of us, the capital building was set to close at 4 p.m. in accordance with a new Republican rule. The rule was ignored. "A decision has been made to do what they've been doing all week long, and that is to do everything to keep things peaceful and keep people safe," said Peg Schmidt, spokeswoman for the police command in the capital. "There's not going to be any forcible removal." This was a huge turning point for the people's movement in Wisconsin. The rules of Walker are not being carried out.

In fact, religious leaders of many different faiths added their voices. "I think that this action tonight is silencing the people's voice," said Rabbi Renee Bauer, of the Interfaith Coalition for Worker Justice of South-Central Wisconsin. "Silencing the minority, or the people with less power, is a real moral problem. This feels like it's about shutting down the peaceful demonstration one step at a time." Firefighters and nurses also pledged to stay at the capital. Nonviolent training sessions were conducted in order to train the crowd to ensure peace is maintained. One tactic instructed falling "limp" when being carried from the building. The protesters never had to use this tactic as over 600 people were allowed to stay overnight without incident.

Two weeks ago, public workers -- teachers, in particular -- were openly demonized as greedy hoarders. Protesters suffered heckling and angry yells. Every local article online about the topic garnered at least five comments, usually all negative. Now, I haven't heard any anger from the public. There still is quite a bit out there, but folks are canning it. Leaders from school boards to firefighters and religious leaders have voiced disgust with the bill. School employees and school boards are not waiting for the bill to be passed. They are taking the initiative to engage in collective bargaining, following the guidelines that Walker has called for in his bill. This should eliminate the need to strip workers of their bargaining rights. But it won't stop Scott Walker. Nothing will, except us.