Karl Rove is not scared of Sarah Palin

He and his lobbyist girlfriend are gearing up for 2012 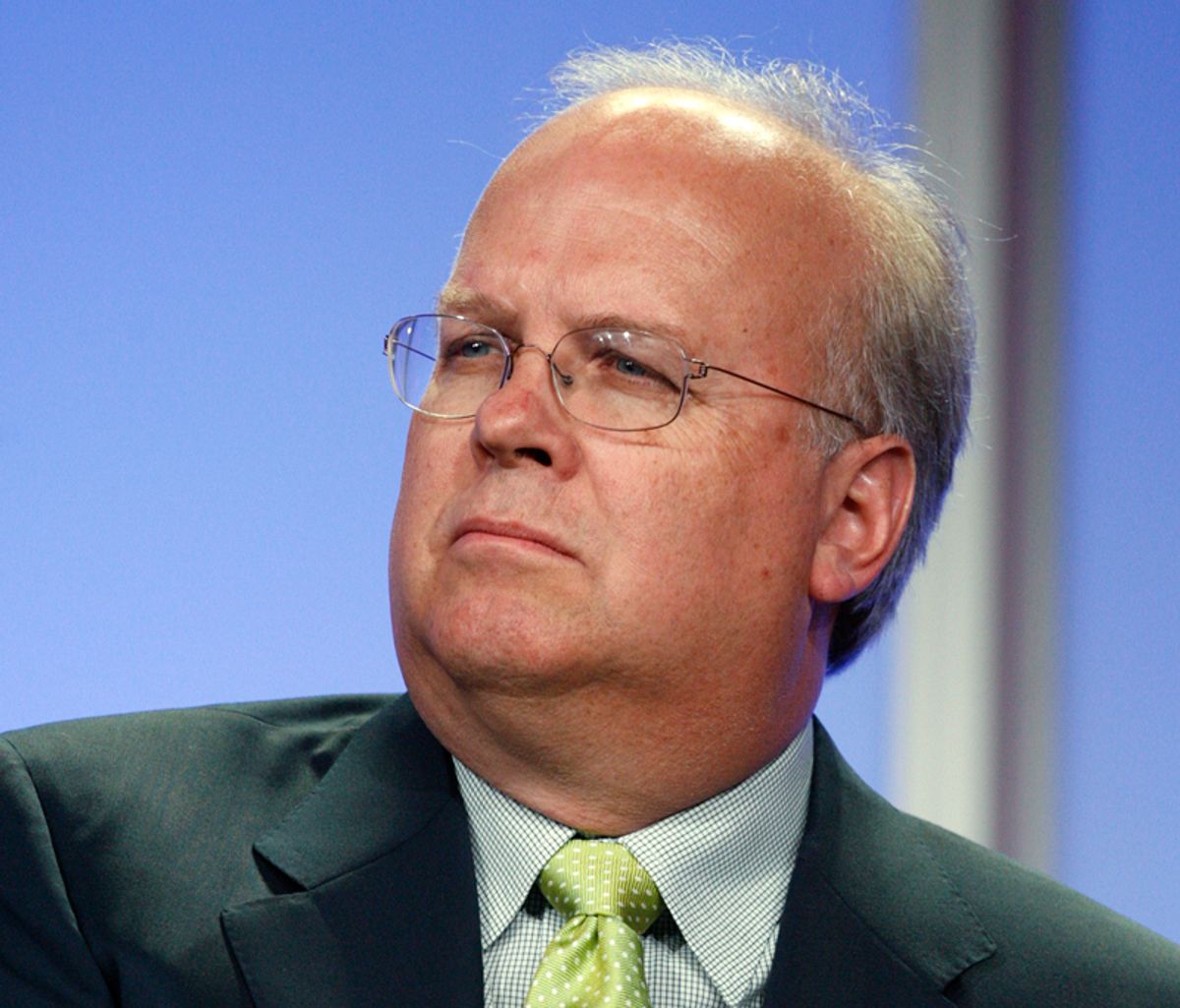 Karl Rove is a relentless self-promoter and consummate campaign dirty trickster who's never been quite as brilliant as he wants everyone to think he is. (You don't have to be "brilliant" to win elections when you're able to raise unlimited funds and willing to just be dirty as hell.) He is the subject of a New York Magazine profile about his role in the post-Bush Republican party. He is still helping Republicans win elections, by raising a lot of money.

Fun fact: Rove, who divorced his wife of 24 years in 2009, is now openly dating lobbyist Karen Johnson. Johnson sat on Bush's Business Council when he was governor of Texas, and worked for his transition team in 2000, which helped her lobbying business immensely. Rove and Johnson have been rumored to be having an affair for years. The former incarnation of Radar Magazine reported the rumor in 2005. In 2008 Radar claimed that Johnson's family was urging her to leave Rove and settle down with a ranch foreman named (no joke) Rhett Hard. Looks like that is no longer necessary.

Johnson's business partner is of course Katharine Armstrong, the owner of the ranch where Dick Cheney shot Harry Whittington in the face. (This ranch is also where Rove spends a lot of time hanging out with wealthy GOP donors.)

Ok, so, what else do we learn about Rove? He still thinks he's secretly a policy wonk, he nearly went broke during his legal troubles and divorce, he got his Fox job by just calling up his good friend Roger Ailes and saying he needed cash ("a Fox spokesperson says that Ailes doesn’t recall that version of events"), and Fox pays him much less than they pay Palin. He claims there is no such thing as the "Republican establishment" that meets in backrooms to plot out the future of the party and anoint candidates, but also this happened:

Last spring, Rove was ready to don the crown. He gathered the old tribes together and effectively anointed himself their leader, holding a breakfast at his house in D.C. with eighteen leaders of rival pacs, including former Nixon and Bush 41 confidant and GOP fund-raiser Fred Malek, of American Action Network, and Mary Cheney, Dick’s daughter, representing the Partnership for America’s Future. The anxious group was packed into Rove’s cramped living room, his two massive, ceiling-high shelves of history books looming over them.

Rove also mocks Sarah Palin and wishes that Jeb Bush would run for president. Rove is not scared of Palin -- or of Rush Limbaugh -- which looks like political bravery but is really just the knowledge that the base that the rest of the GOP is in thrall to is actually a relatively small demographic segment of the electorate. And his Crossroads money-raising machine will probably have a significant role in deciding who gets the 2012 GOP nomination, even though Rove doesn't particularly like any of the candidates involved.

(The profile is illustrated with a photo of Rove taken by artist Andres Serrano, known among non-art aficionados primarily for his 1987 piece "Piss Christ." I assume this is New York having a bit of fun.)