What do Charlie Sheen and Rand Paul have in common? 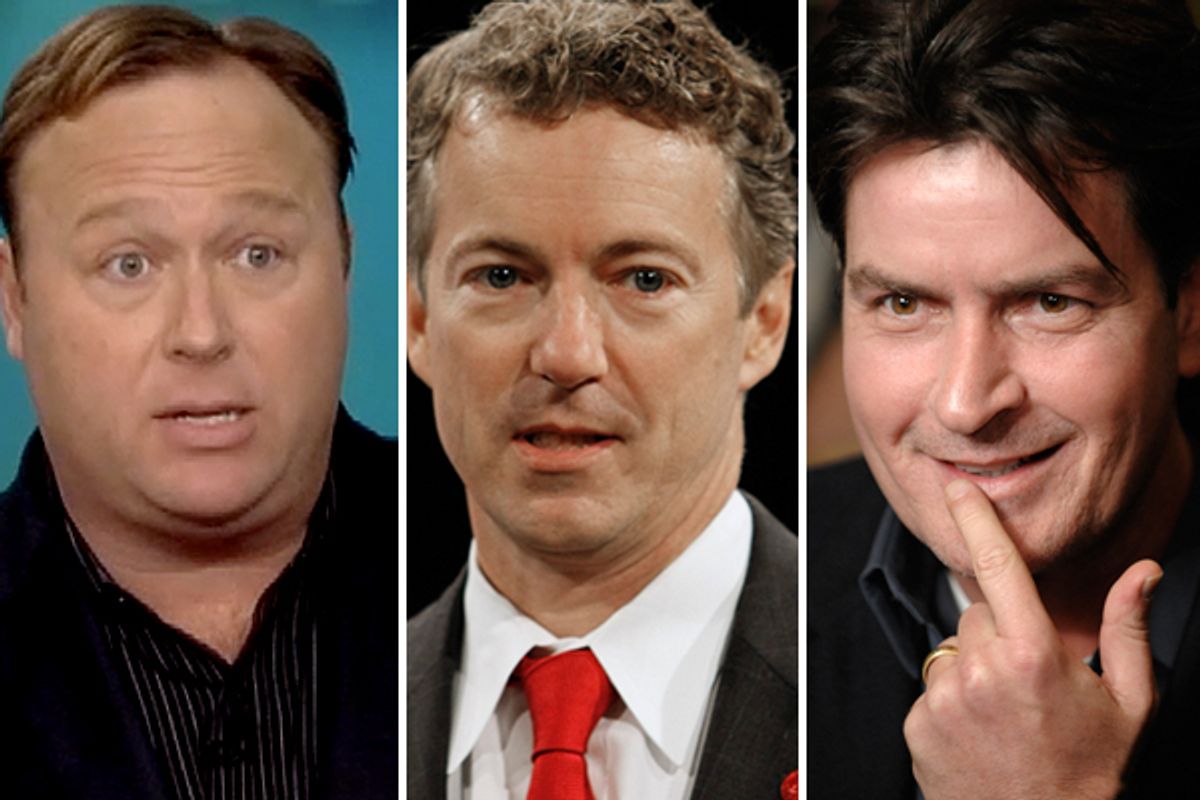 I'm not sure how many witnesses to Charlie Sheen's current dramatic extended flameout remember this fact, but in 2009, Sheen made headlines for a bizarre piece he wrote in which he imagined interrogating President Obama about 9/11 conspiracy theories. The fantasy dialogue was accompanied by this video:

All of this was published at PrisonPlanet.com, one of the many websites founded and run by talk show host Alex Jones, along with his various acolytes. It was on Jones' show, last week, that Sheen began his recent media blitz and probably ended his profitable sitcom. Anyone familiar with the long, strange career of Jones probably enjoyed his train-wreck appearance on "The View" Monday:

The fact that the executive producer of "Loose Change: Final Cut" -- a man who made his name in Texas radio in the 1990s by campaigning for the construction of a new Branch Davidian church as a memorial to the cult members "murdered" by Janet Reno -- was a guest on ABC's daytime talk hour for ladies is a sign that 2011 ought to be about as weird as any year in our nation's truly weird history.

9/11 Trutherism barely scratches the surface of the Alex Jones mythology, which encompasses almost every modern major conspiracy theory of the American left and right. He describes himself as a paleoconservative or a libertarian, rails against fiat currency and the Federal Reserve, opposes the Patriot Act and globalization, posits that the Bilderberg Group is in the process of establishing a New World Order, claims Michelle Malkin is softening up the populace for FEMA camps, and argues that carbon taxes will be used to establish a World Government. Sheen and Jones go way back (which means, yes, Sheen's been nuts for a long time).

Jones is, first and foremost, a character. Which is not to say that he's insincere. I'm sure he believes that our secret rulers are hashing out the details of the sovereignty-undermining NAFTA Superhighway at the Bohemian Grove. It's simply to say that there's a reason why Richard Linklater had Jones shouting his mad prophecies through megaphones in both "Waking Life" and "A Scanner Darkly." The guy is a uniquely American type.

He's also about as fringe a character as exists in our politics, excepting maybe overt white supremacists. Glenn Beck won't endorse Trutherism. Michele Bachmann either backed out of appearing on his show or never agreed to do it in the first place.

But here's then-candidate and current Sen. Rand Paul making one of his multiple appearances on "The Alex Jones Show" in 2009. "You're a weapon we need to use against the New World Order," Jones tells Paul:

Here's another appearance from later that year:

The Ron Paul coalition was basically an uneasy alliance between serious libertarians and fringe Internet weirdos in thrall to conspiratorial explanations for all that ails the country. The weirdos tended to out-organize and outnumber the serious people, which is why it raised few eyebrows when the doctor's son and campaign surrogate called into the Jones show. But with the GOP establishment halfheartedly embracing Paul's message and wholeheartedly embracing his branding, and with Paul the Younger an actual United States senator, I can't imagine anyone's too happy to see national media attention lavished on Jones.

But the Tea Party connection to this entire Charlie Sheen circus is too entertaining to ignore.