Why I left my children

My husband is the one who wanted kids. But I learned I didn't have to live with them to be a good mother 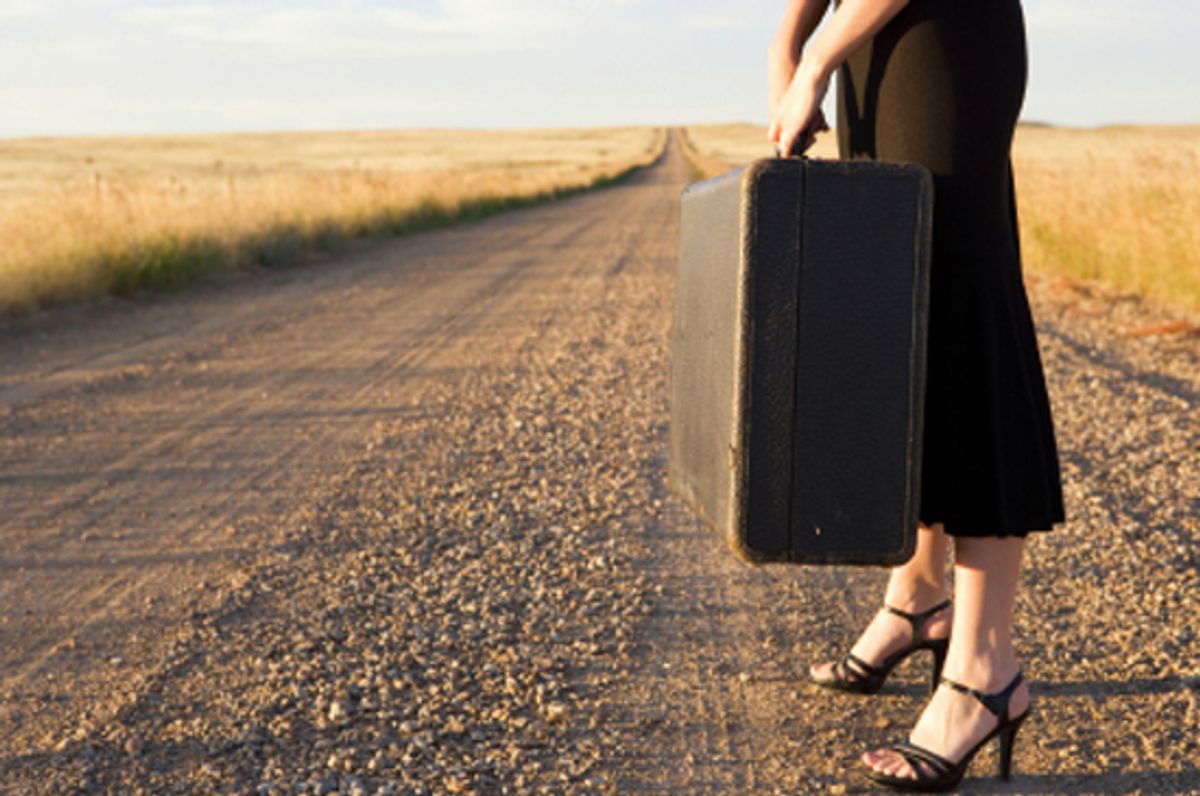 In 2001, 16 days after my youngest son's third birthday, I walked out the door of my Brooklyn, N.Y., brownstone with one piece of luggage. I was leaving my family. Two sons, age 5 and 3, and my childhood-sweetheart husband, my partner for 20 years.

I had been awarded a grant to live in Japan for six months to interview the survivors of the atomic bomb. It was an honor that my husband had encouraged me to apply for, and we were in complete agreement, in fact he insisted, that I should go. The question was not how he and the kids would manage -- he had plenty of help from a loving caretaker who had become part of our family, and from actual blood relations living down the block and flying in from halfway around the world. The wild card was me: How would I do, living in a foreign country where I did not even speak the language, living on my own for the first time ever in my 37-year-old life?

My marriage did not survive.

The question I am always asked is, "How could you leave your children?" How could you be the mother who walks away? As if my children were embedded inside me, even years after birth, and had to be surgically removed? As if I abandoned them on a desert island, amid flaming airplane debris and got into the lifeboat alone?

Hyperbolic. Inflammatory. But that's part of the point. Because my relationship with my children survives. In fact, it has improved.

It was a matter of months -- perhaps two -- when my husband and I began fighting long distance. Our marriage ran aground on expectations, promises and old habits. Shoulds. What we should be doing, what we should want, what we should do or say. We had been together since I was 17. We had spent more of our lives together as a couple than we had apart. And we destroyed our marriage in less time than it takes a credit card company to report you for nonpayment.

I will not tell you the children never noticed I was gone. Though there were plenty of times I could not get them to stop watching Barney to talk to me on the telephone, I also received some very sad phone calls and transcribed e-mails, including one that said, "When I called you last night I felt like I really missed you very much." But when they arrived in Japan to live with me four months after I left, I was the one who was in trouble. They were happy -- in love with their father and with me -- thrilled with the temples and the trains and the samurai castles and the bean cakes shaped like fish. I was in "mommy shock." Without a strong marriage to support me, after four months alone and in a new country I had grown to love but was only just beginning to understand how to navigate, I had no idea what to do with these bouncing balls of energy. Even feeding them, finding them a bathroom, was a challenge.

It raised a little issue for me that I have neglected to mention: I never wanted to be a mother.

I was afraid of being swallowed up, of being exhausted, of opening my eyes one day, 20 (or 30!) years after they were born, and realizing I had lost myself and my life was over.

Yet their father wanted a family. He begged. He promised to take care of everything; he removed every possible obstacle I could think of. He would be the primary caretaker if I would just have them.

It all makes sense now, doesn't it? I am a cold bitch. I was never a mother in anything but name. I am probably one of those women who will be arrested for going to a nearby bar and leaving my children asleep in a house with a faulty pilot light: a house in flames.

I am a bad mother.

But that's not true either.

My trip to Japan changed me. I went from being uncertain, ambivalent, loving but overwhelmed, to being a damned good mother. My marriage failed, and I gave primary physical custody to my husband. But I kept joint custody, and I did not take the house in Hawaii and jump a plane into the sunset. I moved down the block and began the long, hard work of proving to my children, and myself, that I am here.

These days, my sons live and sleep at their father's house. They can walk to their "other house" -- mine -- which they do several times a week. They come over after school and get picked up at bedtime, and in between I help them with their homework, we cook dinner together, eat and clean up together, and we talk about the day. Normally, we get in a few rounds of Quiddler or Yahtzee, or we Hulu episodes of old TV shows, like "Jamie Oliver's Food Revolution," that we missed because we were on the plane coming home from a two-week vacation in Hawaii with their grandparents. And we cry together when Jamie cries, and when a 16-year-old girl talks about how she might only have seven years to live. We do a lot of hugging, even in public, even though they are now boys entering their teens.

I had to leave my children to find them. In my part-time motherhood, I get concentrated blocks of time when I can be that 1950s mother we idealize who was waiting in an apron with fresh cookies when we got off the school bus and wasn't too busy for anything we needed until we went to bed. I go to every parent-teacher conference; I am there for performances and baseball games. My former husband is there too. Though it was not easy for him, he has made it possible for me to define my own motherhood, and for our sons to have a life of additions, rather than subtraction, of a relative peace, rather than constant accusation.

Yesterday, on a blog, I read a plea from a young woman who was planning to go to a residency and leave her 2- and 4-year-old children. "Am I crazy?" she wrote. "Someone tell me." I thought about answering, but I didn't know what to say. Would I do it again? Yes. Should she do it? Only she can answer that question. Then I looked at the date and realized: She was already gone.

Rahna Reiko Rizzuto is the author of the memoir "Hiroshima in the Morning," which was a finalist for the National Book Critics Circle. Her debut novel, "Why She Left Us," won an American Book Award. The first woman to graduate from Columbia College with a BA in Astrophysics, she was raised in Hawaii and lives in Brooklyn. "Shadow Child" is her most recent novel, just published in May 2018 by Grand Central Publishing.