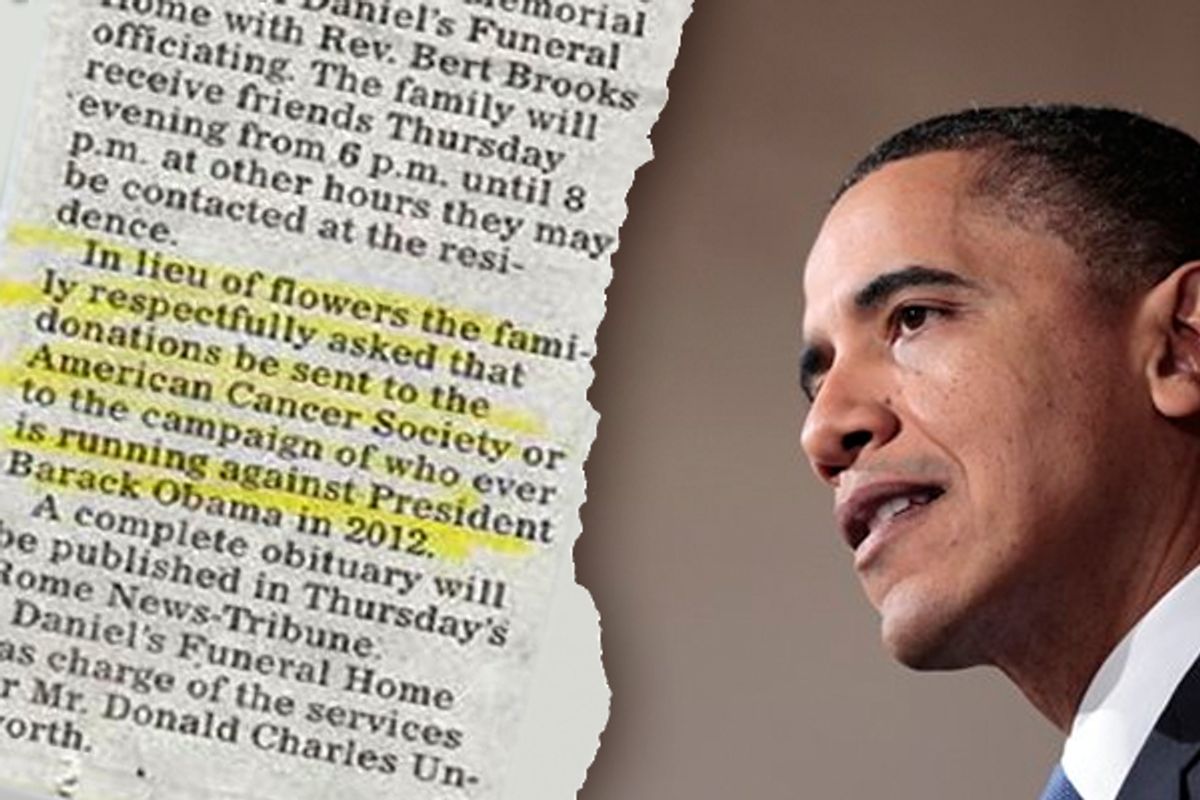 Via the Fix, check out this paid obituary notice for James Harrison, a native of The Woodlands, Texas, who died of cancer last week:

A Celebration of Jim's Life will be held at 4:00 PM, Saturday, March 5, 2011 in the Chapel of Forest Park The Woodlands Funeral Home.

In lieu of flowers, at Jim's request, please make a donation to ANYONE running against Barack Hussein Obama, or the American Cancer Society.

This must be one-of-a-kind, right? As it turns out, no. This is at least the sixth such anti-Obama obituary since last August. And according to the rules of threes, that easily adds up to a bona fide journalistic trend.

An obituary for one Ellwood Eckert, who died in October, appeared in the Montgomery Advertiser (via Nexis) with this solicitation:

"In lieu of flowers, the family requests that donations be made to Faith Rescue Mission; the American Cancer Society, your favorite charity or, in keeping with Ellwood's sense of humor, anyone running against Obama in 2012."

The apparent popularizer of the anti-Obama obituary was Don Unsworth, a Georgia businessman who died in September. His obituary attracted a lot of media attention because it asked that "donations be sent to the American Cancer Society, or to the campaign of anybody who is running against President Barack Obama in 2012."

Here's a local news story on the obit, in which his family reveals that the anti-Obama call for donations was their idea:

Said his daughter to the local reporter: "He was not really a big Obama fan."

The first recorded anti-Obama obit we could find is an August 2010 death notice for a retired fighter pilot in Florida, Harold Groves.

The idea has also spread to Arizona (in September) and Connecticut (in December). Don't be surprised if the trend blows up as we get closer to 2012.