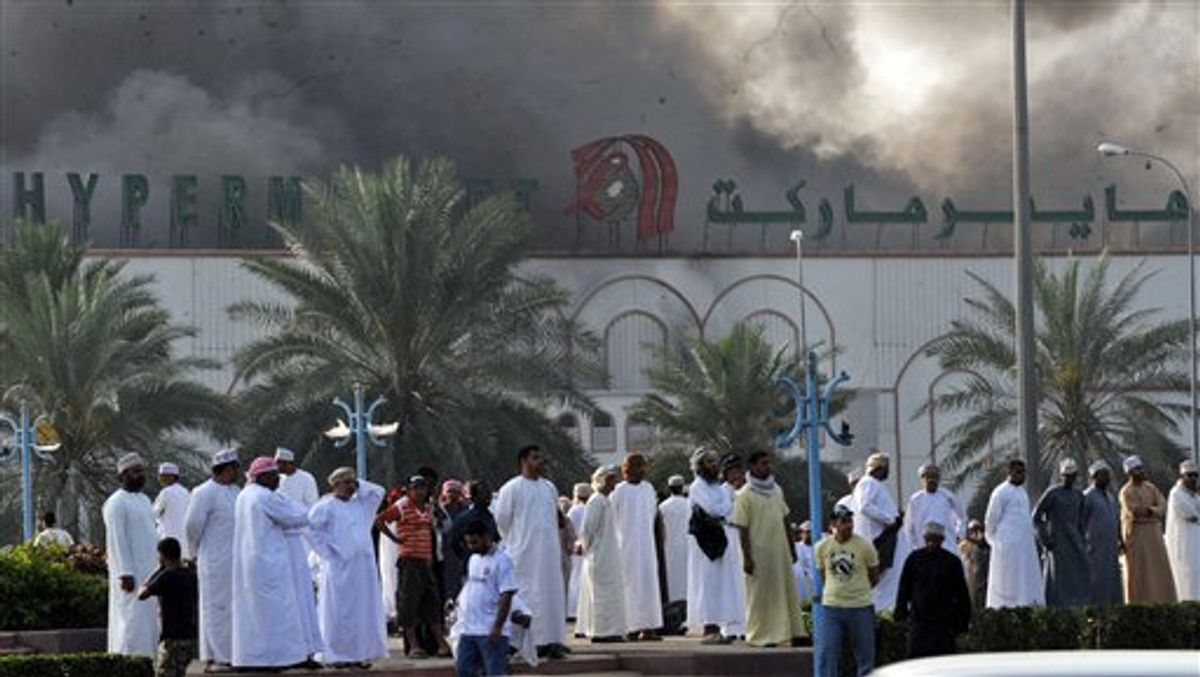 Oman deployed troops north of the capital Muscat and near the border with the United Arab Emirates on Tuesday, following three straight days of anti-government protests, a government official said.

Oman, ruled by a powerful family dynasty, is the latest Arab nation to be swept up in a wave of regional unrest that has already brought down two leaders and threatened the rule of others.

The center of protests in Oman has been the port town of Sohar, about 120 miles (200 kilometers) northwest of Muscat, where demonstrators demanding higher salaries and jobs have clashed with security forces.

Police killed a protester in Sohar on Saturday, after demonstrations turned violent. Several government buildings and a supermarket were set on fire, local media reported.

Anticipating more unrest, the government deployed troops and military vehicles around the capital and near Oman's border with the UAE, a government official said Tuesday. The official spoke on condition of anonymity because he was not authorized to release information to the media.

Protests have been rare in Oman and the ruler, Sultan Qaboos bin Said, is offering reforms to try to quell the demonstrations. On Sunday, he ordered 50,000 civil service jobs be created and offered a monthly stipend of 150 rials ($390) for job seekers. A day earlier, the sultan replaced six Cabinet members.

Thousands participated in a pro-government rally on Tuesday afternoon. They rallied in central Muscat, in front of the capital's biggest mosque, chanting slogans in support of Oman's long-serving ruler and calling on the anti-government protesters in Sohar to refrain from destroying state and private property.

Oman shares control with Iran over the Strait of Hormuz at the mouth of the Gulf -- the route for about 40 percent of the world's oil-tanker traffic. Oman also plays an important role as a mediator between Iran and the West because of its strong ties to Tehran and Washington.

On Monday, State Department spokesman P.J. Crowley said that the U.S. has been in contact with the Omani government and has encouraged Muscat "to undertake reforms that include economic opportunity and move toward greater inclusion and participation in a peaceful political process."