Taking a page from Sarah Palin, the former defense secretary strikes back after Woodward blasts his book 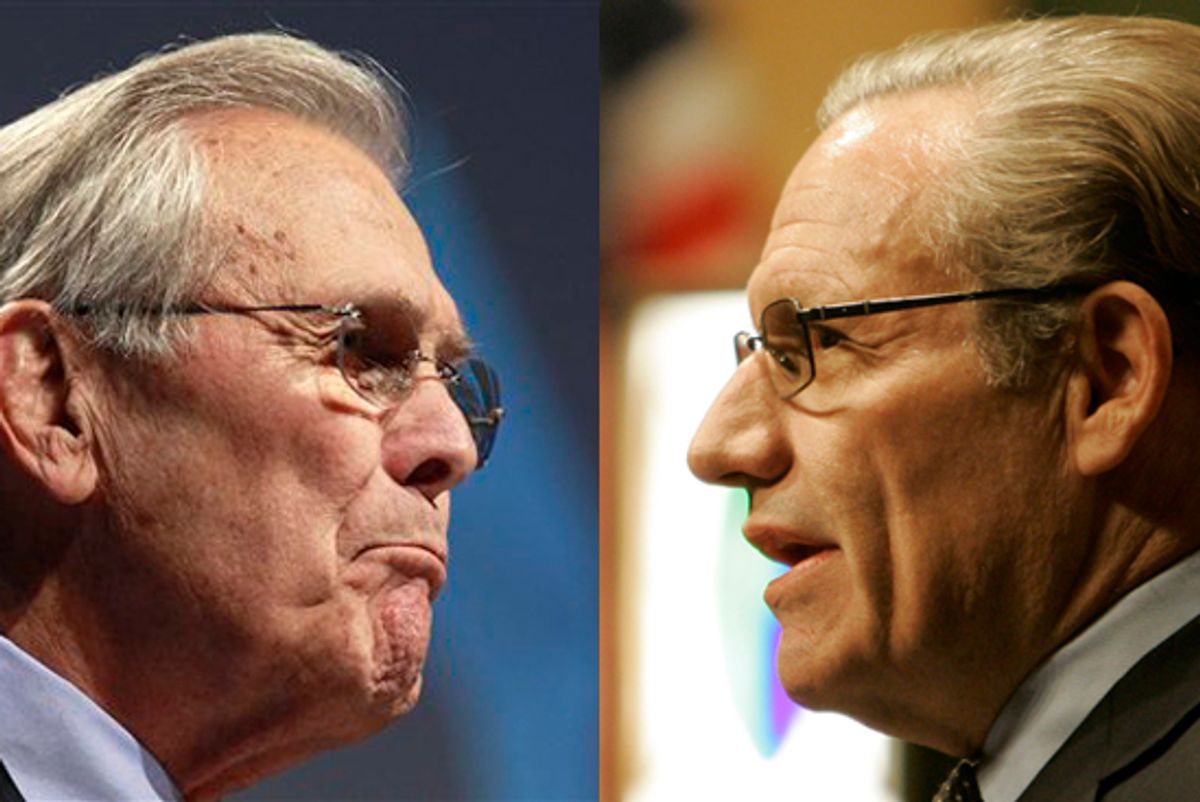 This morning Bob Woodward let loose with a fierce attack on Donald Rumsfeld's "Known and Unknown," the former defense secretary's 832-page exercise in covering his own behind. Based on his own reporting, Woodward pinpoints Rumsfeld's deceptions about his role in hustling us into war with Iraq. In a book filled with evasion and deception, Rumsfeld's effort to shed blame for the war is breathtaking. I recently watched him pretend to NBC's Andrea Mitchell that he was unfamiliar with the term "stove-pipe" -- as in the notorious term "stove-pipe intelligence," widely used to describe the way Rumsfeld's Pentagon funneled only the information that bolstered its case against Iraq to other decision-makers, and kept different intelligence players in the dark about what others were doing. (Rachel Maddow's staff later found that Rumsfeld had used the term himself.)

Rumsfeld's memoir has come in for plenty of criticism, but Woodward, a writer and Beltway player known for deference to the powerful, eviscerates it. He calls "Known and Unknown" "one big clean-up job, a brazen effort to shift blame to others -- including President Bush -- distort history, ignore the record or simply avoid discussing matters that cannot be airbrushed away. It is a travesty, and I think the rewrite job won't wash."

By mid-afternoon, Rumsfeld had replied: Not in an Op-Ed, or a statement to reporters -- but on his own Facebook page, à la Sarah Palin.

Mr. Woodward has demonstrated a regrettable tendency to put his storyline ahead of the facts….Woodward has been repeatedly accused of "tilting the facts," "misleading remarks," "disingenuous statements," and placing "book sales above journalism."

The well known story about Bob Woodward is that he practices what is derided as "access journalism," whereby he favors those who provide him with information and gossip and leak against their colleagues. Those who refuse to play along, such as Donald Rumsfeld, then pay the price.

Fairness requires that I give one point to Rumsfeld: Woodward is indeed notorious for "access journalism," as well as coming down on the side of the likely winners in any story. In his first Bush book, "Bush at War," the president and his Cabinet were depicted as decisive, disciplined and principled. By the final installment in the Bush trilogy, "State of Denial" -- published when the Iraq war was going disastrously, Secretary of State Colin Powell had departed, and there was known (and unknown) infighting and finger-pointing around the White House -- Woodward told a tale of dysfunction. But he told it well, and he marshaled his facts in Foreign Policy today to unravel Rumsfeld's claims of distance from the Iraq debacle.

"The record shows that it was Rumsfeld stoking the Iraq fires -- facts he has completely left out of his memoir," Woodward reports. He turns to an account from his second book, "Plan of Attack," in which Rumsfeld is captured as early as Sept. 11, 2001, musing about whether the U.S. "should hit S.H. [Saddam Hussein] at the same time" as Osama bin Laden, the attack's mastermind. National Security Council notes show Rumsfeld raised the question again Sept. 12. When Woodward asked the defense secretary about it during a 2002 interview, he first "blew up," denying that he'd suggested taking out the Iraq dictator. Later, in what seems to have been an off-the-record conversation, he confessed, but said he'd made the suggestion in the interest of making sure the NSC hadn't "missed" anything. "It was a fair question," he told Woodward. (It should be noted that Woodward left the exchange out of his next book, "Plan of Attack.")

Rumsfeld also insists in his book that he wasn't sure Bush had made the decision to go to war until he actually told the country March 19, 2003, but Woodward interviewed Rumsfeld in October 2003, and was told that Rumsfeld and Dick Cheney informed Saudi Prince Bandar Jan. 11 "you can count on this. In other words at some point we had had enough of a signal from the president that we were able to look a foreign dignitary in the eye and say you can take that to the bank this is going to happen."

There's been tension between Woodward and Rumsfeld since at least 2002, when the defense secretary questioned why Bush administration officials agreed to work with the Washington Post reporter, and criticized his work as marked by "a great many inadequacies." There's no doubt Rumsfeld is the villain of "State of Denial."  I can still remember Woodward writing about the way Rumsfeld "snowflaked" internal memos with unsigned Post-it notes -- granular and annoying for staff, but ultimately deniable for the boss -- a symbol of the defense secretary's buck-passing pettiness.

Rumsfeld's Facebook note is a little bit like a snowflake: It's short, he can take it down, he can edit it. He signed this one, but it has a certain kind of Post-it-like impermanence. Like Palin, Rumsfeld is known for holding grudges and settling scores, so it makes sense they'd both take to Facebook. But it makes them both look a little bit like vindictive high schoolers; I'd have to give this round to Woodward.