The voluptuous star of 40's and 50's films passes away from respiratory failure, at the age of 89 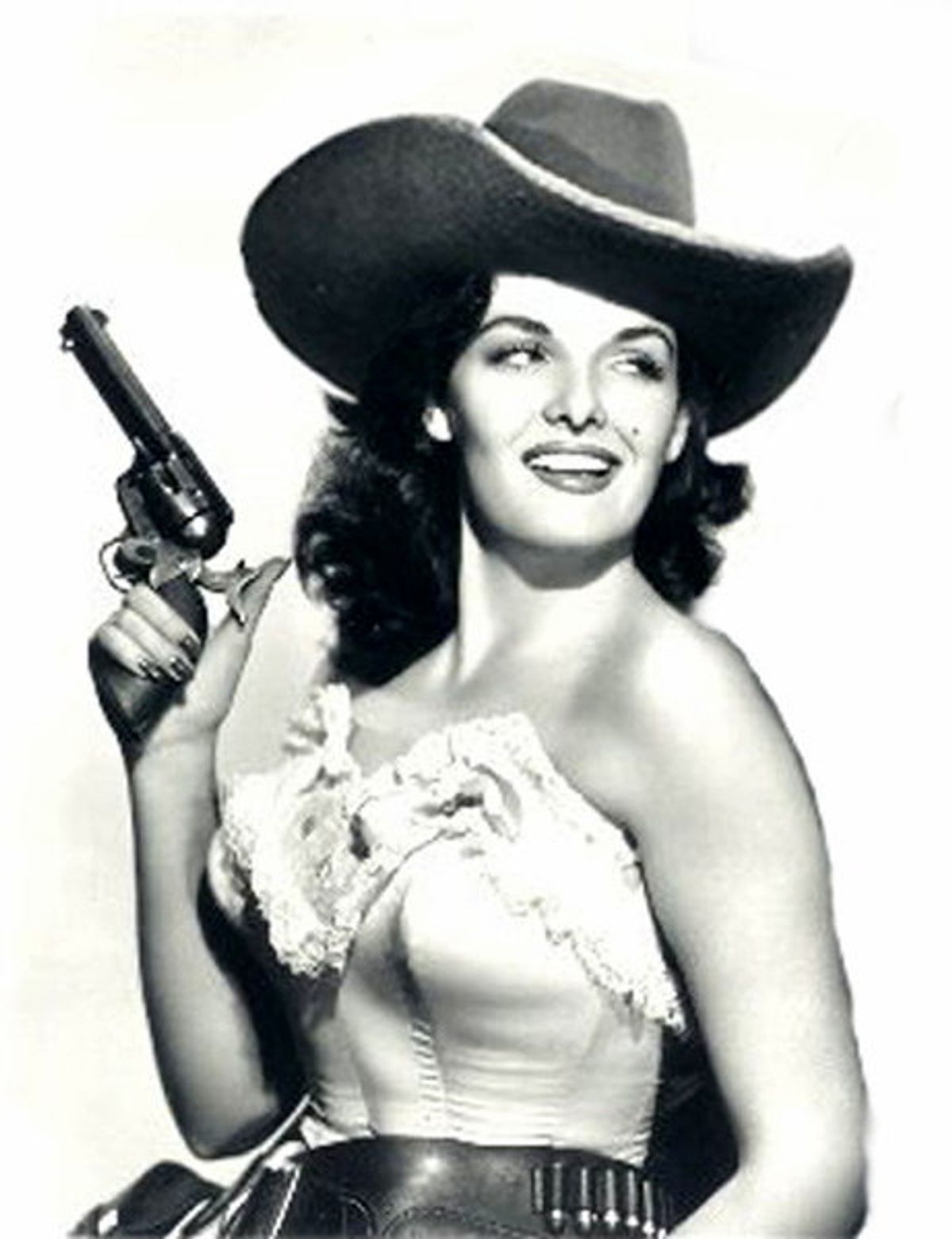 She was the voluptuous pin-up girl who set a million male hearts to pounding during World War II, the favorite movie star of a generation of young men long before she'd made a movie more than a handful of them had ever seen.

Such was the stunning beauty of Jane Russell, and the marketing skills of the man who discovered her, the eccentric billionaire Howard Hughes.

Russell, surrounded by family members, died Monday at her home in the central coast city of Santa Maria. Her death from respiratory failure came 70 years after Hughes had put her on the path to stardom with his controversial Western "The Outlaw." She was 89.

Although she had all but abandoned Hollywood after the 1960s for a quieter life, her daughter-in-law Etta Waterfield said Russell remained active until just a few weeks ago when her health began to fail. Until then, she was active with her church, charities that were close to her heart and as a member of a singing group that made occasional appearances around Santa Maria.

"She always said 'I'm going to die in the saddle, I'm not going to sit at home and become an old woman,'" Waterfield told The Associated Press on Monday. "And that's exactly what she did, she died in the saddle."

It was an apt metaphor for a stunningly beautiful woman who first made her mark as the scandalously sexy and provocatively dressed (for the time) pal of Billy the Kid, in a Western that Hughes fought for years with censors to get into wide release.

As the billionaire battled to bring the picture to audiences, his publicity mill promoted Russell relentlessly, grinding out photos of her in low-cut costumes, swimsuits and other outfits that became favorite pinups of World War II GIs.

To contain her ample bust, the designer of the "Spruce Goose" airplane used his engineering skills to make Russell a special push-up bra (one she said she never wore). He also bought the ailing RKO film studio and signed her to a 20-year contract that paid her $1,000 a week.

By the time she made her third film, the rollicking comedy-western "The Paleface," in which she played tough- but-sexy Calamity Jane to Bob Hope's cowardly dentist sidekick, she was a star.

She went on to appear in a series of potboilers for RKO, including "His Kind of Woman" (with Robert Mitchum), "Double Dynamite" (Frank Sinatra, Groucho Marx), "The Las Vegas Story" (Victor Mature) and "Macao" (Mitchum again).

Although her sultry, sensual look and her hourglass figure made her the subject of numerous nightclub jokes, unlike Marilyn Monroe, Rita Hayworth and other pinup queens of the era, Russell was untouched by scandal in her personal life.

During her Hollywood career she was married to star UCLA and pro football quarterback Bob Waterfield.

"The Outlaw," although it established her reputation, was beset with trouble from the beginning. It took two years to make, according to its theatrical trailer, and director Howard Hawks, one of Hollywood's most eminent and autocratic filmmakers, became so rankled under producer Hughes' constant suggestions that he walked out.

It had scattered brief runs beginning in 1943, earning scathing reviews. The Los Angeles Times called it "one of the weirdest Western pictures that ever unreeled before the public."

Russell's only other notable film was "Gentlemen Prefer Blondes," a 1953 musical based on the novel by Anita Loos that cast her opposite Monroe.

She followed that up with the 1954 musical "The French Line," which -- like "Gentlemen Prefer Blondes" -- had her cavorting on an ocean liner. The film was shot in 3-D, and the promotional campaign for it proclaimed "J.R. in 3D. Need we say more?"

In 1955, she made the sequel "Gentlemen Marry Brunettes" (without Monroe) and starred in the Westerns "The Tall Men," with Clark Gable, and "Foxfire," with Jeff Chandler. But by the 1960s, her film career had faded.

"Why did I quit movies?" she remarked in 1999. "Because I was getting too old! You couldn't go on acting in those years if you were an actress over 30."

She continued to appear in nightclubs, television and musical theater, including a stint on Broadway in Stephen Sondheim's "Company." She formed a singing group with Connie Haines and Beryl Davis, and they recorded gospel songs.

For many years she served as TV spokeswoman for Playtex bras, and in the 1980s she made a few guest appearances in the TV series "The Yellow Rose."

She was born Ernestine Jane Geraldine Russell on June 21, 1921, in Bemidji, Minn., and the family later moved to Los Angeles' San Fernando Valley. Her mother was a lay preacher, and she encouraged the family to build a chapel in their back yard.

Despite her mother's Christian teachings, young Jane had a wild side. She wrote in her 1985 autobiography, "My Paths and Detours," that during high school she had a back-alley abortion, which may have rendered her unable to bear children.

Her early ambition was to design clothes and houses, but that was postponed until her later years. While working as a receptionist, she was spotted by a movie agent who submitted her photos to Hughes.

The producer was famous for dating his discoveries, as well as numerous other Hollywood actresses, but his contact with Russell remained strictly business. Her engagement and 1943 marriage to Waterfield assured that.

She was the leader of the Hollywood Christian Group, a cluster of film people who gathered for Bible study and good works. After experiencing problems in adopting her three children, she founded World Adoption International Agency, which has helped facilitate adoptions of more than 40,000 children from overseas.

She made hundreds of appearances for WAIF and served on the board for 40 years.

As she related in "My Path and Detours," her life was marked by heartache. Her 24-year marriage to Waterfield ended in bitter divorce in 1968. They had adopted two boys and a girl.

That year she married actor Roger Barrett; three months later he died of a heart attack. In 1978 she married developer John Peoples, and they lived in Sedona, Ariz., and later, Santa Barbara. He died in 1999 of heart failure.

Over the years, Russell was also beset by alcoholism. She was able to rebound from troubles by relying on lessons she learned from her Bible-preaching mother.

"Without faith, I never would have made it," she commented a few months after her third husband's death. "I don't know how people can survive all the disasters in their lives if they don't have any faith, if they don't know the Lord loves them and cares about them and has another plan."

A public funeral is scheduled March 12 at 11 a.m. at Pacific Christian Church in Santa Maria.

In lieu of flowers, the family asks that donations be made in her name to either the Care Net Pregnancy and Resource Center of Santa Maria or the Court Appointed Special Advocates of Santa Barbara County.