Why the GOP won't get blamed for a govt. shutdown

In 1995, Fox News didn't exist and the Internet was in its infancy. This time around, Republicans have backup 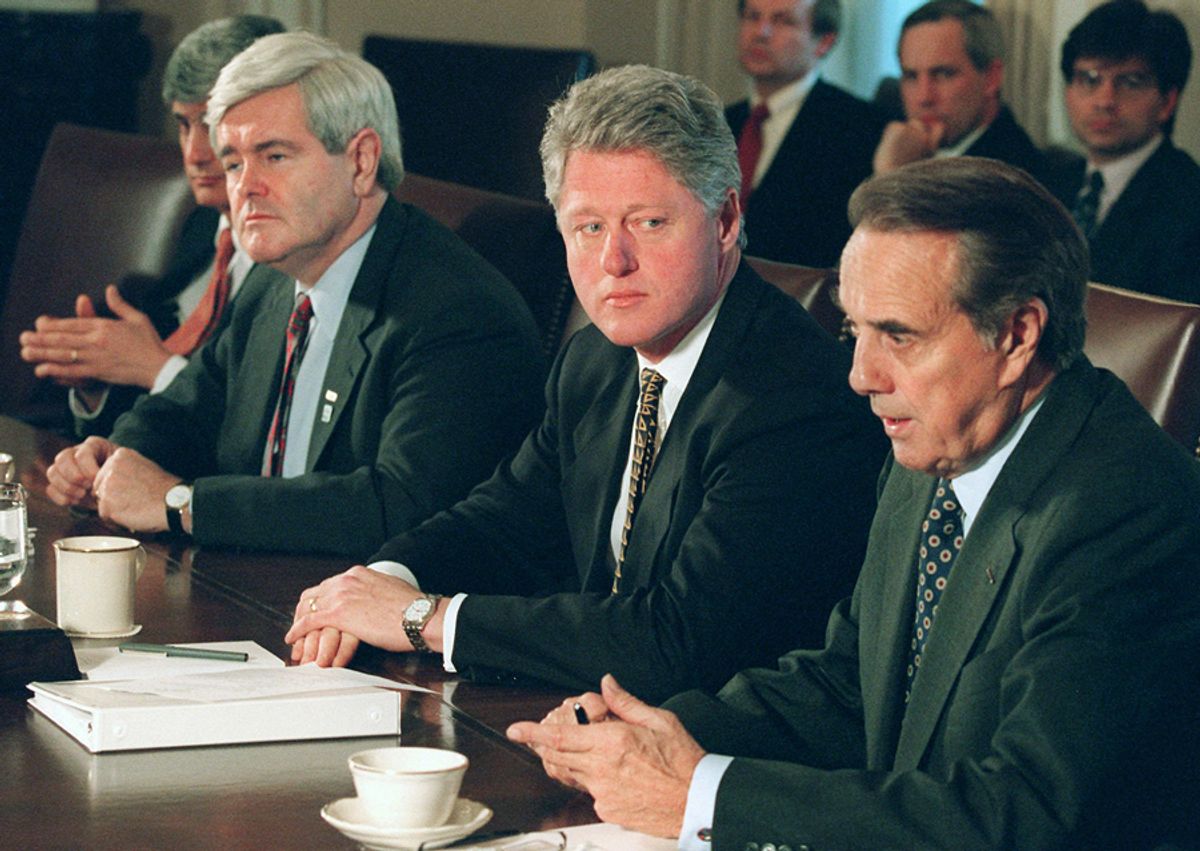 An interesting nugget is buried near the end of today's New York Times article focusing, yet again, on the influence of the House Republican freshman class: "In Shadow of 1995, G.O.P. Freshmen Stand Firm."

What is more, in the view of Mr. Rokita and some other freshmen, their attitudes are getting a far broader and sympathetic airing than those of their Republican brethren of 1995.

"Quite honestly, the major newspapers had a stranglehold on political news in 1995," Mr. Rokita said. "Now you have cable on both sides. People can much more easily choose the news they watch, and I am able to get my messaging out, or I can at least make a case."

Rokita is correct on the basic facts. Fox News didn't start operations until October, 1996 and the Internet was barely getting started as a medium for news distribution. But what about Rokita's subtext? The received wisdom passed down to the political class from the storied events of the 1995-96 government shutdown holds that Republicans got the bulk of the blame for the stalemate. Rokita is implying that the condemnation was unfair, a product of biased media that only told one side of the story. In an opinion piece published in the Washington Post last Friday, Newt Gingrich made the same argument, claiming that "our attempt to balance the federal budget was distorted in the news media as an effort to ruin family vacations, frustrate visitors to the nation's capital and prevent government employees from going to work."

I just spent some time looking through the New York Times archives, trying to figure out how the notion that the public blamed Republicans for the shutdown got started. And while my survey is hardly comprehensive, the thesis seems to have taken hold in response to the results of opinion polls that, very early on, indicated the public was leaning against the GOP.

Recent opinion polls have found that the public increasingly blames Republicans for the budget deadlock and that President Clinton's political standing has grown. But such poll findings tend to be transitory, and the situation could turn quickly.

By April, the consensus had hardened:

For months, voter surveys have hinted at an emerging disenchantment with the Republican Party. Polls show that voters blame Republicans for the shutdown of the Federal Government last fall and winter, and that the fractious Republican primaries compounded their concerns.

The hardened ideological warrior's response would be that of course the polls turned against the Republicans, because the mainstream media was steering the public against Gingrich's revolutionarie!. For example, on Nov. 15, 1995, in "Along U.S. 30, the Deadlock Spawns Irritation and Fears," reporter Elizabeth Kolbert wrote that "In an unscientific sample of people who live along the route, the President seemed to be faring slightly better than his adversaries." Who can say whether or not that "unscientific sample" ended up shaping public opinion?

But let's not get bogged down in a chicken-versus-egg of how polls reflected mainstream media coverage or vice versa in the 1990s. Whoever is responsible, there is little question that the public did end up disenchanted with Republicans. Clinton won again in 1996, something no one would have predicted after the 1994 midterms, and the Republican majority in the House was trimmed in both 1996 and 1998.

But nobody should be expecting history to repeat itself. Because Rep. Rokita is absolutely right. The media landscape has completely transformed. What the formulation "People can much more easily choose the news they watch" really means is that "people can much more easily choose the reality that they want to live in, and get it backed up 24 by 7 by their favorite blogs and cable channels." And what that means is that any Democrat expecting that a replay of the 1995-1996 government shutdown will automatically repeat the same political dynamic is likely to be disappointed. There will be a cacophony of blame to spread around, coming at us from all sides of the information spectrum. The only hard data that will answer the question of who gets damaged the most by a real showdown -- if one ever comes -- won't arrive until November 2012.