Europeans may scoff at peanut butter, but they're hawking creamed Biscoff cookies as an alternative. Will we bite? 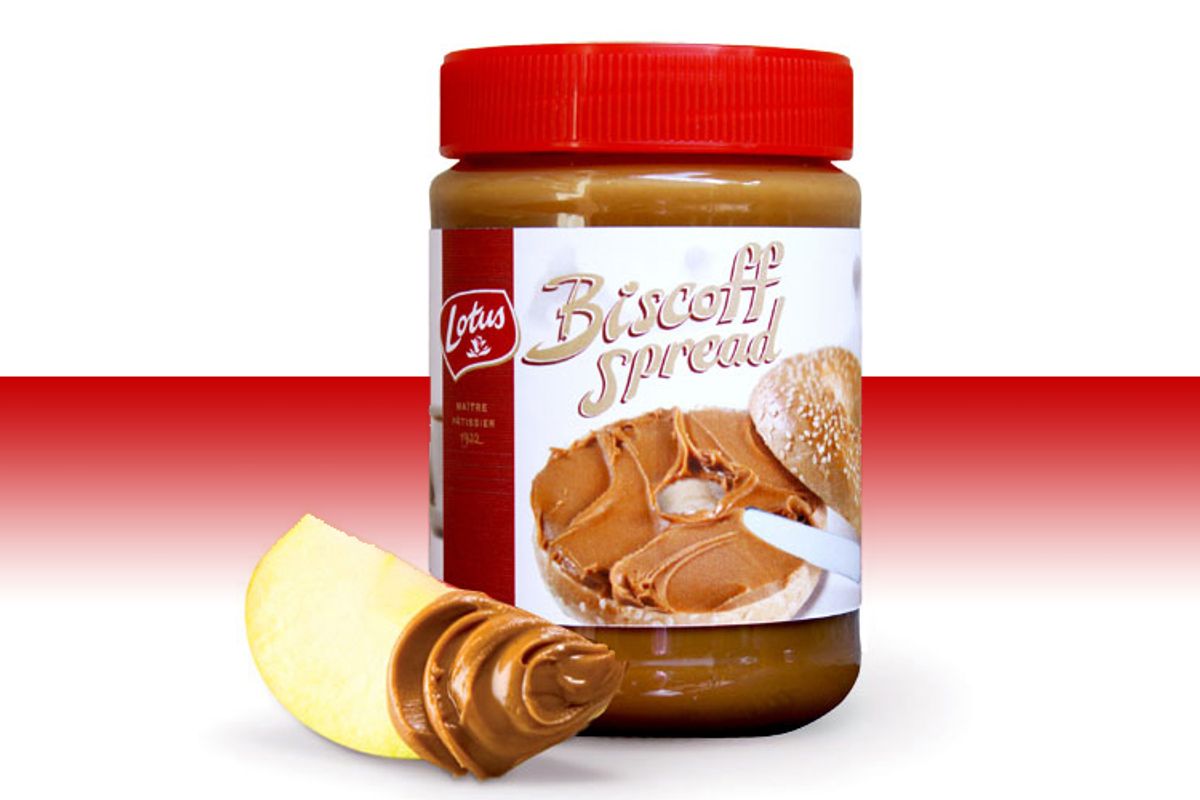 It is the greatest scandal to rock Belgium since Jean-Claude Van Damme was revealed to be a giant Smurf posing as a martial arts master: Lotus and Willems, master biscoff cookie makers, battling it out for the right to sell speculoos spread, a creamy paste made from the beloved, traditional cinnamon ginger cookie of Flanders. In the U.S., this might just have been a snoozerific story of copyright infringement; but in Europe, a land of deep cultural connection to its foods and seriously wonky laws, it's turned into an epic battle that has pit baker against baker, brother against brother. It involves reality television.

I am an on-the-record lover of Biscoff cookies, the treats served on Delta Air Lines flights that have earned a cult following, if a cult following for an airplane snack can be said to exist. Light, fantastically crisp, just-sweet-enough and tasting of caramel and warm spices, they're like everything you've ever wanted in gingerbread or graham crackers.

But how does it taste in creamy spread form? I got my hands on two versions: One is by Lotus, who makes the Delta cookies, and who is one of the legal combatants for the patent. (Willems, Lotus' legal rival, doesn't export its version to the U.S. yet.) The other is by Tamarin, who is not affiliated with either Lotus or Willems, so I'm tempted to think they're just Belgian rogues quietly selling cookie paste under everyone's noses. (The kooky video on Tamarin's website, where two fresh-faced teenagers dress up in safari gear in a shopping mall and start guerrilla-selling its spread, doesn't do anything to dissuade that thought.)

The box for my Biscoff Spread reads, "Europe's alternative to peanut butter," which is hilarious because it's a cliché that Europeans hate peanut butter. They're mystified by Americans' love of the stuff, and the sight of a PB&J makes them shake their head in pity for us. So now, apparently, their answer to peanut butter is: creamed cookies. If you've ever said that America's junk food is getting the world fat, please take a moment to reflect on this.

Biscoff's version is literally made of cookies, pulverized and emulsified with oil to a smooth, peanut buttery paste. It's dark and glossy, definitely good-looking, but Tamarin's needs a little work. It's pale, and it doesn't spread well, making it look suspicious and fatty.

Biscoff: Wow, this is kind of incredibly delicious. It really does make the bread taste like the familiar cookie, ginger-snappy, only richer and smushier. You really need the bread with it, though, because it's also very sweet. God help you and your child's eventual diabetes if you actually do switch out your peanut butter for this. That said, I only meant to take a couple of bites, but then kind of involuntarily ate the whole sandwich. I cannot, by law, recommend that kind of behavior, and am nervous about how much sugar and fat I'm about to find myself eating.

Tamarin: Ugh. UGH. The greasy flavor of the fat hits you first, then, even as the sugar and gingery flavors follow, the fat keeps poking its head up and waving hello. It won't go away, and it has the unmistakable flavor of supermarket cake, the kind that is frosted with Sweetex. Wait, you've never heard of Sweetex? It's a commercial frosting shortening called Sweetex. Say that word out loud. Isn't that all you need to know about it? Anyway, I think the Tamarin part of today's show is over.

And finally, the smeared-on-apple test:

OK, now this stuff is getting dangerous. From a technical standpoint, the pairing of this spread and apple -- in this case a very tart Granny Smith -- works because the acidity in the fruit lifts and balances the richness and sugar. But as it's making me eat more and more of this not-very-good corner deli apple, I'm realizing how utterly scary it would be to be a parent with Biscoff spread in the house. I mean, imagine being a kid and realizing that there is a jar of something that makes everything taste like cookies.

The bright side, nutritionally, is that you could probably convince anyone to eat this apple. But, you know, you'd be eating about half a pound of fattened-up cookie with it. Proceed with caution, people.