Don't be afraid of economic terrorists

How stupid can we get? A Pentagon-funded study warns that al-Qaida might have helped crash the economy 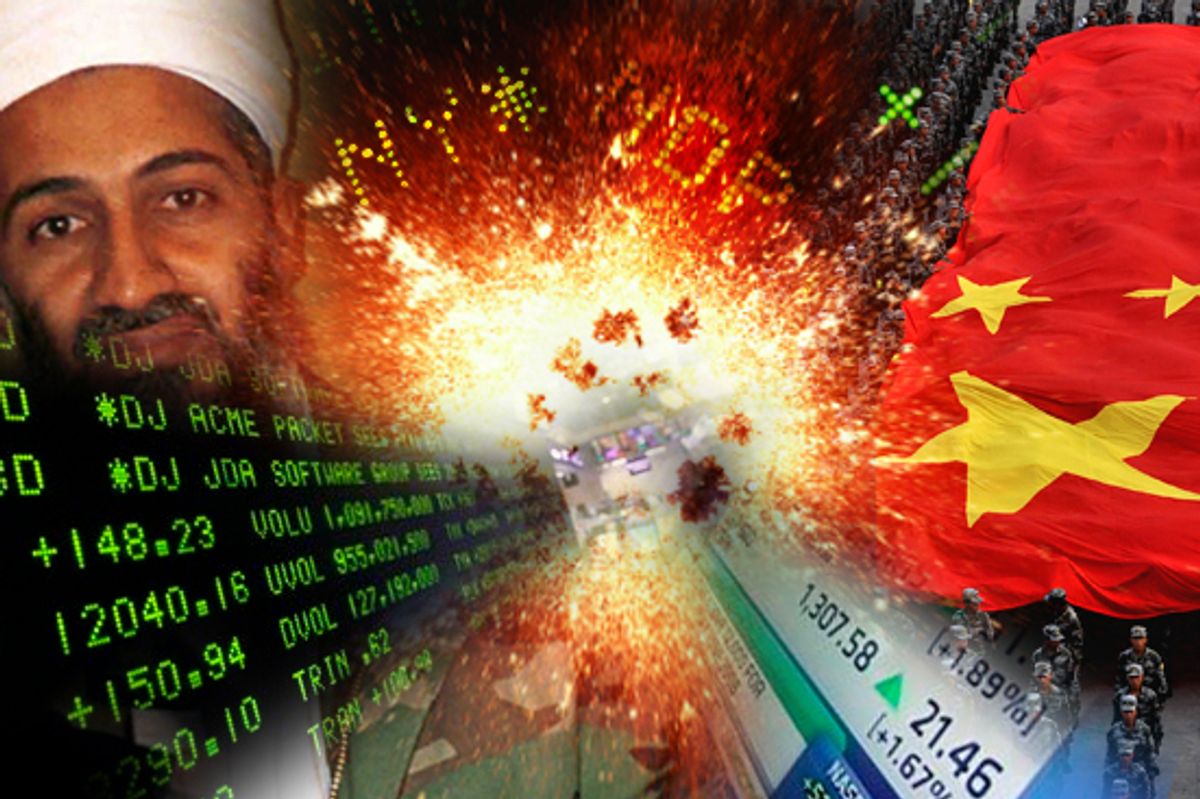 Just because there isn't any evidence proving that jihadi terrorists, Chinese Communists, Hugo Chavez or Mahmoud Ahmadinejad, separately or acting together, masterminded Wall Street's great financial crash of 2008 doesn't mean it couldn't have happened! That, in a nutshell, is the absurd, disturbing message at the heart of Kevin D. Freeman's Pentagon-funded study, "Economic Warfare: Risks and Responses." Since so much of what happens on Wall Street is hidden from public view or regulatory oversight, we don't know what really happened. Therefore, anything could have happened. And since there are bad guys who hate us -- well, you connect the dots.

Freeman published his study in June 2009, funded by a contract from the Department of Defense's Irregular Warfare Support Program. But for reasons that are not entirely clear, the Washington Times's Bill Gertz, a reporter who has made a career of hyperbolically exaggerating national security threats to the United States, waited until Tuesday of this week to cover the study at great length, declaring authoritatively, "Financial terrorism suspected in 2008 economic crash," and earning, along the way, a fat link from Matt Drudge (and some speedy mocking from Columbia Journalism Review's Ryan Chittum). It seems the Pentagon no longer wants to have anything to do with Freeman's thesis, and even though it was submitted as source material to the Financial Crisis Inquiry Commission, failed to be included in the final report. So clearly, there is a conspiracy to suppress Freeman's truth-telling.

And why not: The truth is too scary!

There can no longer be doubt that an economic war already could be underway as this is written. Unfortunately, unless proper action is taken immediately to uncover this potential risk, it may only be discovered too late...

Immediate consideration of the issues outlined in this report is vital. Further study is essential and prospective responses must be crafted to address future risks. Finally, there are legitimate questions about the performance of the regulatory regime and Wall Street institutions. Implications that these parties have been complicit or otherwise co-opted cannot be ruled out. Therefore, it is strongly recommended that this study and any task-force response be conducted outside of traditional Washington and Wall Street circles.

Or, alternatively, the fact there is no actual evidence supporting the thesis and the analytic rigor demonstrated by Freeman isn't what a serious person would find remotely convincing might be the real reasons for the mass shunning. Personally, I love nothing better than reaching back to ancient history to support a contemporary observation, but citing an article by an adjunct professor of rhetoric at St. Thomas University in Miami, Fla., titled "The Radical Muslim War Against the Western Tax Base," which in turn cites Belgian historian Henri Pirenne's thesis that Arab economic warfare brought about the fall of the Roman Empire in the 8th and 9th centuries A.D., as support for the proposition that al-Qaida was orchestrating the run-up in oil prices in 2007 and the "bear raids" on Wall Street investment banks like Bear Stearns and Lehman Brothers, strikes me as just a bit of a stretch.

What we do know about how the collapse of the housing boom and the proliferation of dodgy mortgage-backed securities led to the credit crunch suggests that Wall Street's traders needed no help from malevolent actors in collapsing their own house of cards. It's not that complicated. They were greedy and stupid and government regulators were asleep at the wheel.

But here's the funny thing. Freeman, in the absence of any "forensic evidence" nailing the true perpetrators, can still blithely go ahead and argue that this might have happened without fear of contradiction because there is still much that is obscure to us. The machinations of oil speculators and derivatives traders are highly opaque. And on this point, I could not agree more with him.

The reason is that there has been a serious lack of transparency in regard to the primary instruments used in bear raids, notably credit default swaps and naked short sales. Complicating the matter further is the fact that those who initiate the trades are typically hidden behind brokerage firms, hedge funds, foundations, and other client pools. A third layer of complexity is caused by globalized securities markets wherein trades can be placed in one geography for instruments in a different country to be transacted in a third location.

In conclusion, Freeman recommends a series of proposals that include efforts to provide more transparency on hedge funds and commodity speculation, along with increased derivatives-trading regulatory oversight. Excellent ideas, all of them! The more we know about what's going on in the markets, the better off we'll all be.

Although I suspect it will still be a while before we find any Chinese or Saudi boogeymen. We've already met the enemy. He is us.