After apologizing for his anti-Semitic remarks, the former Dior creative director could face jail time 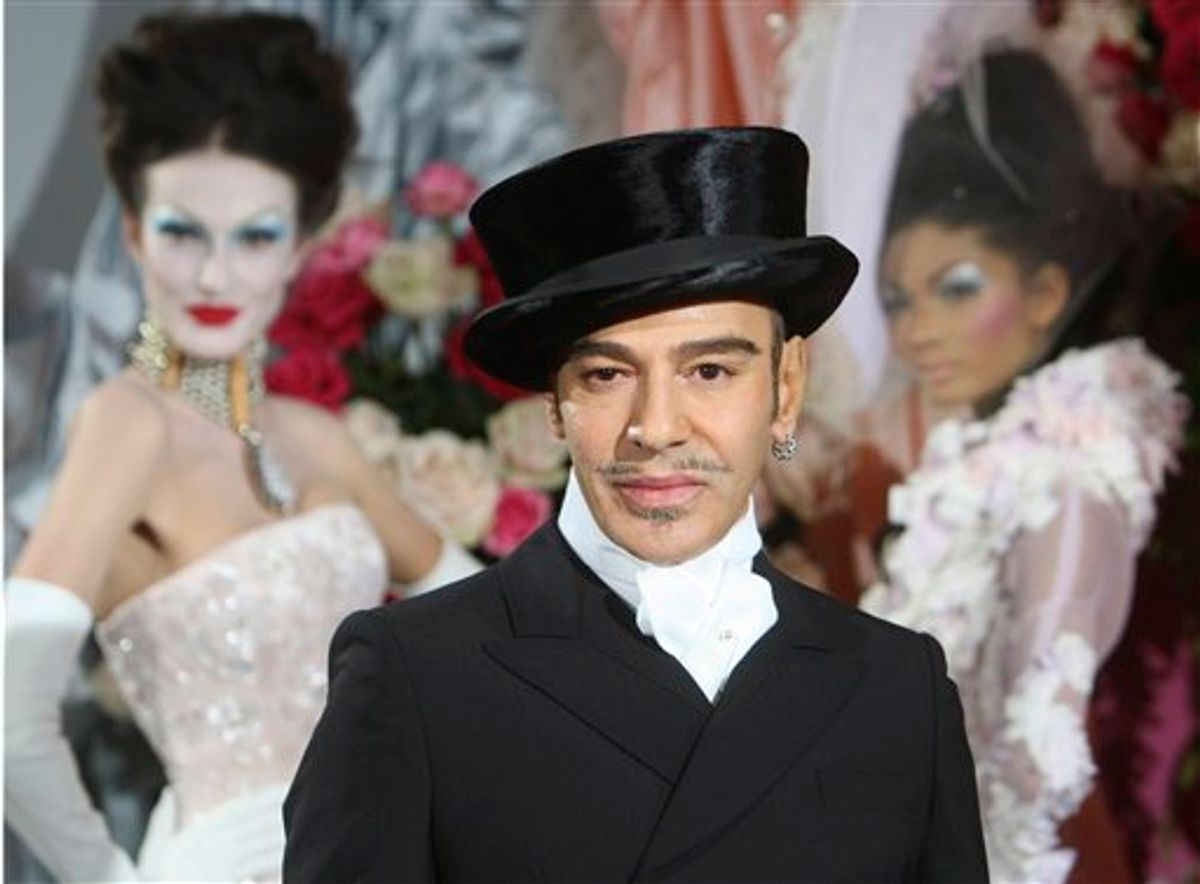 FILE - In this Jan. 25, 2010 file photo, fashion designer John Galliano poses at the end of the presentation of the Dior Haute Couture spring/summer 2010 fashion collection in Paris. Christian Dior said Tuesday, March 1, 2011, that Galliano has been immediately laid off, just days after he was suspended as its creative director pending an investigation into an alleged anti-Semitic incident in a Paris cafe last week.(AP Photo/Jacques Brinon) (AP)
--

Paris prosecutors on Wednesday ordered John Galliano to stand trial over alleged racial insults -- a development welcomed by the famous fashion designer's attorney, who said his client has been the victim of a "veritable lynching" in the court of public opinion.

The trial could take place between April and June, and Galliano could face up to six months in prison and euro22,500 ($31,000) in fines if convicted, the prosecutors office said in a statement.

Capping a five-day whirlwind of scandal around the designer, the prosecutors said he will face allegations of "public insults based on the origin, religious affiliation, race or ethnicity" against three people.

The news came shortly after the talented 50-year-old designer apologized for his behavior after top-tier house Christian Dior sacked him as creative director over anti-Semitic remarks.

Video of an inebriated Galliano praising Hitler and the subsequent firing of one of the industry's most talented and moneymaking designers have sent shock waves through Paris Fashion Week, which began Tuesday.

Galliano's French lawyer, Stephane Zerbib, said the trial would be an opportunity to get to the bottom of the case "under much calmer conditions."

"Over the past four days, Mr. Galliano has been the object of a veritable lynching," Zerbib said on a panel on Canal Plus television.

Galliano broke his silence on the issue Wednesday.

"Anti-Semitism and racism have no part in our society. I unreservedly apologize for my behavior in causing any offense," he said in a statement via his British lawyers.

Galliano also said he was "seeking help" for his personal failures, without elaborating. At fashion week, a spokesperson for the John Galliano clothing line declined to comment when asked if the designer was in rehab.

Galliano's downfall began Thursday when he was detained in a drunken state and questioned about accusations that he hurled anti-Semitic insults at a couple in a Parisian cafe. Another complaint about a different incident followed. Then a video of yet another incident surfaced Monday in which Galliano said "I love Hitler," prompting Dior to fire its star designer after 14 years with the company.

In the statement Wednesday, Galliano said: "I completely deny the claims made against me and have fully cooperated with the police investigation" into the initial cafe case. But he said he fully accepts "that the accusations made against me have greatly shocked and upset people."

"I only have myself to blame and I know that I must face up to my own failures," he said. "In all my work my inspiration has been to unite people of every race, creed, religion and sexuality by celebrating their cultural and ethnic diversity through fashion. That remains my guiding light."

Attorney Zerbib cast doubt on the reliability of the video, saying that it had been taken out of context and suggesting the people Galliano is seen speaking with were deliberately taunting him.

In the video "we see a man who's alone, battling with his demons ... who's in an advanced state of drunkenness and apparently mixed alcohol with medicines," Zerbib said, adding the combination had made Galliano "extremely vulnerable."

"No one knows the context," he said. "Today Mr. Galliano is presumed innocent and will certainly speak out ... at the right moment."

Since his appointment in 1996, Galliano made an indelible mark on the storied House of Dior, with theatrical, often outrageous, runway shows that were among the most-anticipated displays on the Paris calendar. But his behavior finally pushed Dior over the edge.

While Galliano was struggling with his inner demons, fashionistas at Paris Fashion Week were debating who would replace him at Dior, which battles crosstown rival Chanel for the title of world's top fashion house.

Many fashion critics, editors and stylists put their money on Givenchy designer Riccardo Tisci, whose dark, S&M-steeped creations for Givenchy have won him a rabidly devoted fan base.

Naysayers, though, note that Tisci has done little to boost sales at Givenchy, which is also owned by Dior parent company LVMH Moet Hennessy, and suggest that Dior, as the group's moneymaking locomotive, might be looking for someone with a more proven sales record.

Alber Elbaz would fit that profile.

The Moroccan-born Israeli has transformed Lanvin from a musty old Paris label to one of fashion's hottest properties. Rumors have long swirled that he would be a shoo-in to replace Karl Lagerfeld at Chanel once the 77-year-old uber-designer retires, but Elbaz has always insisted he's happy where he is.

"In a perfect world, it would be Alber" tapped to replace Galliano, said Dana Thomas, a veteran fashion critic and author of "Deluxe: How Luxury Lost its Luster."

Other potential candidates include Olivier Theyskens, who's been working for New York-based commercial house Theory after being dismissed from Nina Ricci, and Belgium-based designer Haider Ackermann.

The scandal has thrown Dior into such flux that it was not immediately clear when it would announce any new appointment.

Dior still plans to show its fall-winter 2011-2012 collection as scheduled Friday. A Dior official told The Associated Press on Wednesday the house is focusing on preparing for the show and would not comment on discussions of a replacement for Galliano. The official spoke on condition of anonymity because of company policy.

The fate of Galliano's signature line's presentation, slated for Sunday, remained a question mark. Galliano is also owned by LVMH. A spokesperson for LVMH could not be immediately reached for comment.

Sylvia Hui in London and Angela Charlton in Paris contributed to this report.