Gadhafi vows to fight to last man in Libya 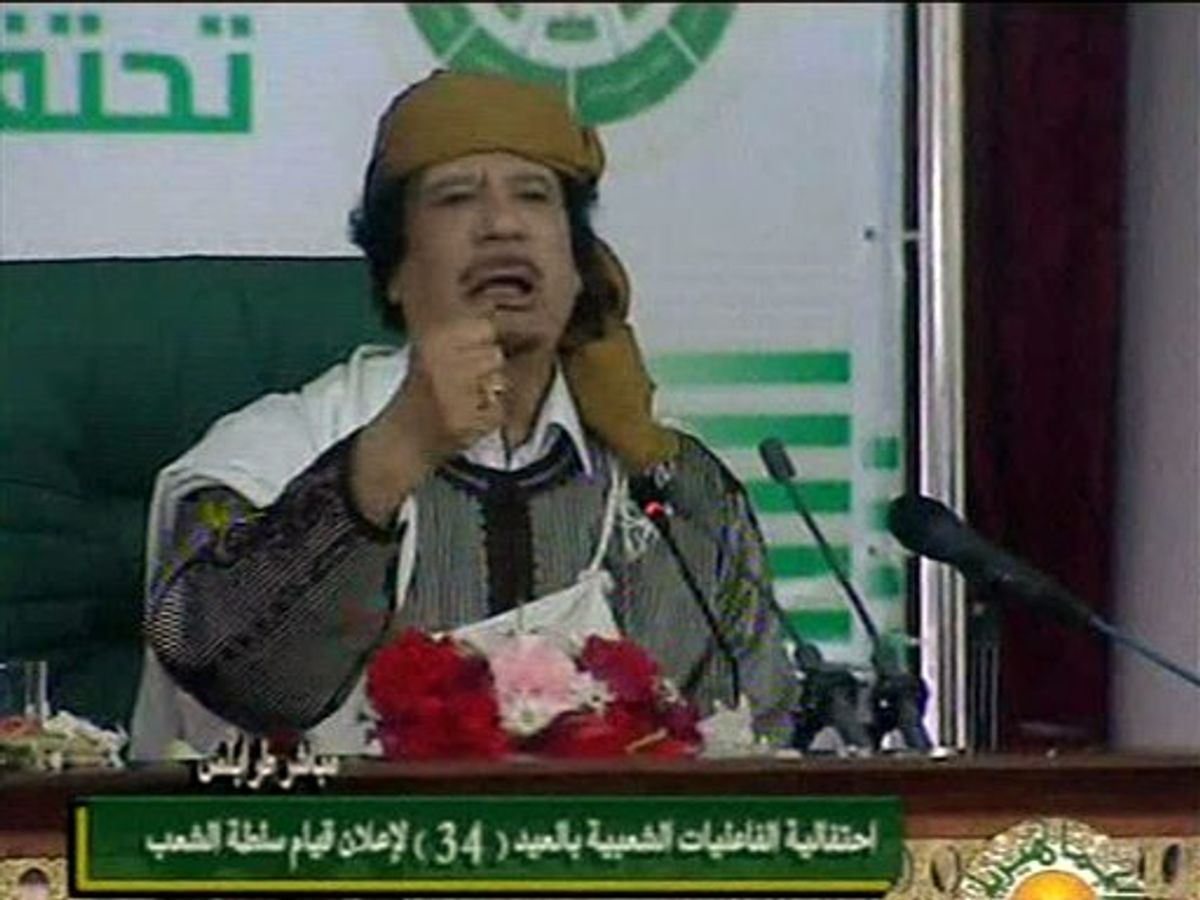 Libyan leader Moammar Gadhafi has vowed to fight to the "last man and last woman" to defend his country.

Gadhafi was addressing supporters and foreign media on Wednesday in a conference hall in the capital Tripoli as his forces were launching a counteroffensive against parts of the rebel-held eastern half of the country.

"We will fight until the last man and woman. We will defend Libya from the north to the south," he said.

Forces loyal to Gadhafi battled government opponents for control of a key oil installation and an airstrip Wednesday on the Mediterranean coast in a counter-offensive against the rebel-held eastern half of the country.

The fighting at the Brega oil port appeared to be the first significant attempt by Gadhafi's regime to push back against the large swath of territory -- almost the entire eastern half of the country -- seized by the oppposition. For the past week, pro-Gadhafi forces have been focusing on securing his stronghold in the capital Tripoli and trying with mixed success to take back nearby rebel-held cities in the west.

In the capital, Gadhafi repeated claims that al-Qaida is behind the uprising, telling a gathering of supporters that a "sleeper cell" launched the protests.

Opposition members said they believe Gadhafi was pulling up reinforcements from bases deep in the deserts of southwestern Libya, flying them to the fronts on the coast.

Soon after sunrise Wednesday, a large force of Gadhafi loyalists in around 50 SUVS, some mounted with machine guns, descended on Brega, catching the small opposition contingent guarding the site by surprise, said Ahmed Dawas, an anti-Gadhafi fighter at a checkpoint outside the port.

The opposition fighters fled, and regime warplanes hit an ammunition depot on the outskirts of the nearby rebel-held city of Ajdabiya, witnesses said. The forces seized the port, airstrip and the oil facilities where about 4,000 personnel work.

But by mid-morning, the opposition counter-attacked. Anti-Gadhafi fighters with automatic weapons were seen speeding out of Ajdabiya in pick-up trucks, heading for Brega, 40 miles away (70 kilometers) away. Dawas said they retook the oil facilities and airstrip. Other witnesses reported regime forces were surrounded by rebels. The sound of screaming warplanes and the crackle of heavy gunfire could be heard as the witnesses spoke to The Associated Press by phone.

Further fighting was taking place in the afternoon at a university campus between Ajdabiya and Brega that was still in pro-Gadhafi hands. An Associated Press reported at the scene heard automatic gunfire and explosions.

In Ajdabiya, people geared up to defend the city, fearing the pro-Gadhafi forces would move on them next. At the gates of the city, hundreds of residents took up positions on the road from Brega, armed with Kalashnikovs and hunting rifles, along with a few rocket-propelled grenade launchers. They set up two large rocket launchers and an anti-aircraft gun in the road.

Brega, 460 miles (740 kilometers) east of Tripoli along the coast, and nearby Ajdabiya are the furthest west points in the large contiguous swath of eastern Libya extending all the way to the Egyptian border that fell into opposition hands in the uprising that began Feb. 15.

Gadhafi's regime has been left in control of the country's northwest corner, centered on Tripoli, but even here several cities have fallen into rebel hands after residents rose up in protests, backed by mutinous army units and drove out Gadhafi loyalists.

In recent days, loyalists succeeded in regaining two of those towns -- Gharyan, a strategic town in the Nafusa mountains south of Tripoli, and Sabratha, a small town west of the capital.

But opposition fighters successfully repulsed attacks by pro-Gadhafi forces on several others: the key city of Zawiya outside the capital; Misrata, Libya's third largest city east of Tripoli; and Zintan, a town further southwest in the Nafusa mountains.

The regime may be bringing in more forces from regions it still dominates in the sparsely populated deserts in the southwest.

Residents of the southwestern oasis town of Sebha -- a key Gahdafi stronghold with military bases 400 miles (560 kilometers) south of Tripoli -- reported heavy movement at the airport there Tuesday night, said Abdel-Bari Zwei, one of the opposition activists in Ajdabiya in touch with sympathizers in Sebha. Zwei said it is believed some of those forces were involved in the offensive against Brega.