Everything you need to know about the iPad 2

Apple's new tablet is thinner, faster, lighter and more versatile. And -- depending on the model -- more expensive 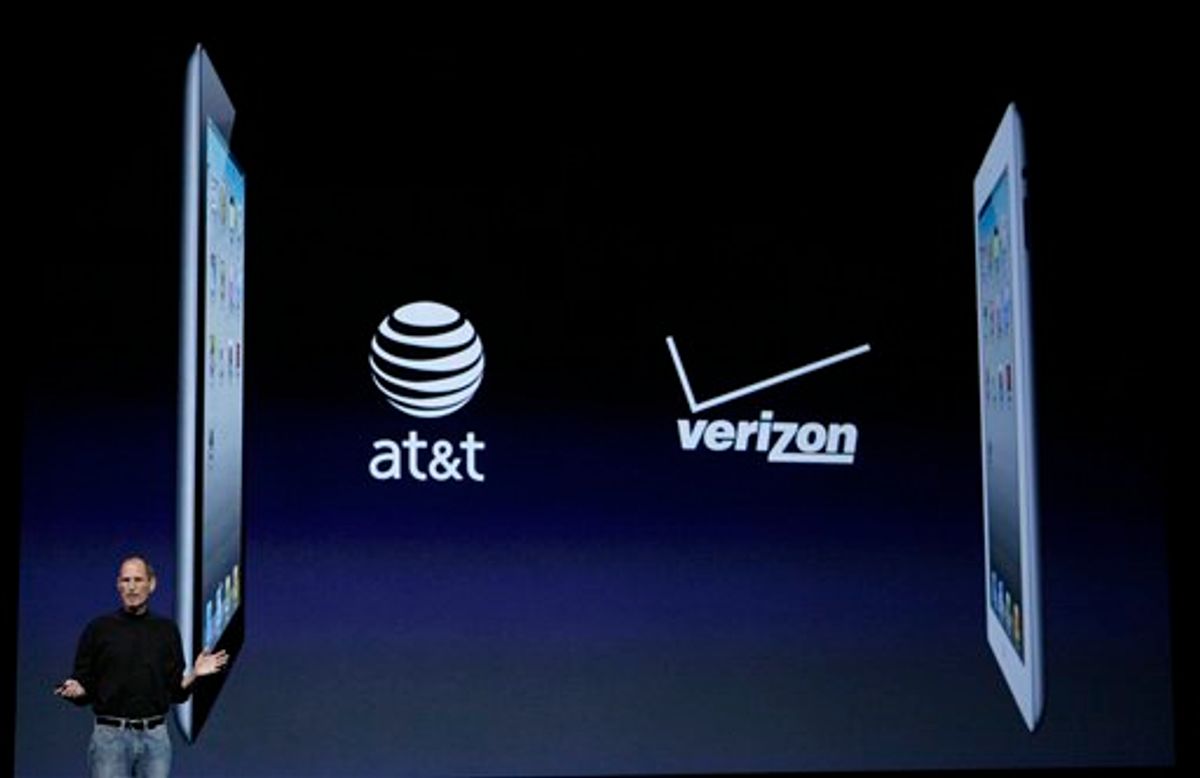 Apple announced the second generation iPad today in San Francisco. As expected, the iPad 2 is faster, thinner and lighter than its predecessor. The new model includes two video cameras, an updating operating system, FaceTime video call capability and HDMI video output. The iPad 2 will hit stores on March 11 and offer 3G capability on both the AT&T and Verizon networks.

Here's a breakdown of all the new features:

Faster processor
Featuring the new Dual-core A5 processor, the iPad 2 will be twice as fast as the current iPad -- graphics should perform 9x faster, says Apple. Despite the more demanding processor performance, the iPad 2 will feature the same 10-hour battery life as the original iPad

Two colors, Two networks
The iPad will come in white and black and will be available on both AT&T and Verizon networks.

Thinner, lighter design
In addition to being 33 percent thinner -- a few millimeters slimmer than the iPhone 4 -- the iPad 2 weighs just 1.3 pounds instead of the 1.5-pound iPad original.

HDMI output
The iPad 2 provides HDMI video output with resolution up to 1080p. An extra $39 adaptor needs to be purchased and allows you to charge your iPad while using.

New case
A new Apple cover will also be available. It magnetically grasps the screen to prevent slipping, automatically wakes/sleeps the iPad, cleans the screen and comes in polyurethane or leather.

Updated operating system
With the release of the iPad 2, Apple will also unveil iOS 4.3 which boasts better Safari performance, iTunes home sharing, and new preferences for the iPad switch. BONUS: The iPhone 4 will become a personal Wi-Fi hotspot.

Improved iLife software -- including iMovie and Garage Band
With the addition of dual video cameras, you can now use iMovie to make and edit video on the iPad. The new Garage Band allows you to turn your iPad into a musical instrument with full size, touch screen interfaces for guitars, drums, pianos and more. Garage Band and iMove are available in the App Store for $4.99 each.

Industry experts and fanboys alike are on the edge of their seats for Apple's big announcement today. According to an invitation sent to the press last week, the Cupertino, California tech innovator will make an announcement this afternoon -- and the invitation included a peak at what appears to be a new iPad.

So what can we expect? Below are some theories. We'll be confirming them as Steve Jobs announces them on-stage in San Francisco.

Faster Processor --> TRUE!
According to CrunchGear, Apple's new A5 processor is almost guaranteed to power the iPad 2. The multi-core chipset would allow for better graphics, improved media management on the device and an obvious improvement to overall performance. As Apple almost always improves processors in subsequent design and is including the A5 in more and more devices, this seems like a sure thing.

Dual Camera --> TRUE!
At this year's Consumer Electronics Show, rumors of a few new features based on new iPad cases reverberated through the tech community. These included a small hole similar to those seen on iPhone cases that indicate where a camera and even a flash could be added. Some have also speculated that Apple will include a second camera on the same side as the screen which would enable the use of FaceTime video chats.

Thinner Profile --> TRUE!
Also based on the specifications Apple issued to case makers, it's close to certain that the new iPad will be thinner than the current version. Size, in general, could be up for grabs as some speculate that Apple could respond to industry trends and release a mini-iPad or even a larger widescreen iPad. Based on precedent, however, Apple seldom makes dramatic changes to their products based on competition -- they tend to set the bar with a revolutionary design and add new features over time.

Sharper Screen --> FALSE
Soon after the first iPad's release, Apple released the Retina display with insanely high resolution. Many believe the Retina display -- or some kind of improvement in the screen -- should be expected with the new iPad, and some recent developments from Apple indicate that they're prepating for a sharper picture. According to the Apple Insider, the newest version of the iBooks app signal a quadrupaling in resolution for the new device.

SD Card Slot --> FALSE
Bowing to consumer demand, an SD card slot similar to that on the current line of MacBooks could be in the cards. New case designs show a slot roughly the size of an SD Card, and in the event that the iPad 2 includes a camera, it will make external storage a must have.

Better Speaker --> FALSE
Another no brainer woudl be to improve the famously bad speaker on the current iPad. New case designs also show a different placement for the speaker.

Other Crazy Things That Probably Won't Happen --> FALSE!
Some speculate that Apple could totally revolutionize the gesture experience by creating new sensors on the front or back of the iPad. The front facing sensors could provide some touchscreen capability on the black bezel area currently used for holding the edges of the device. Another more conceptual -- however patented by Apple -- technology code-named "hot pants" would provide touch capability on the back of the iPad.

Despite his medical leave of absence, Steve Jobs appeared on stage at the Yerba Buena Arts Center in San Francisco to lead the Apple keynote address at 1pm EST.