Is Bernie Madoff a sociopath?

Madoff claims he doesn't suffer from the psychological condition. We ask an expert what that really means 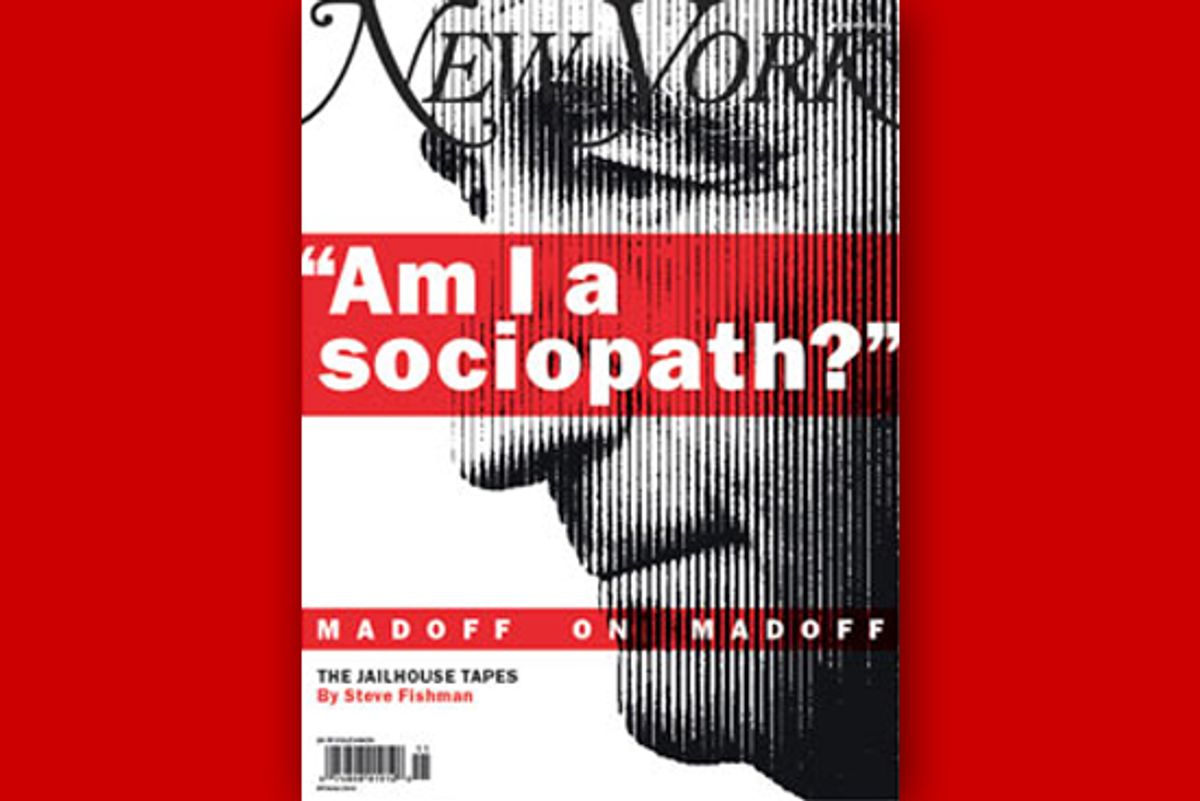 Is Bernard Madoff a sociopath? That's the question posed, almost verbatim, on the cover of this week's New York magazine. Most instinctively assume, yes, he is, but the story aims to challenge that view. In the wake of his son Mark's suicide in December, Madoff contacted New York reporter Steve Fishman for a series of 12 taped phone conversations. The result was the most detailed, first-person account of the criminal saga yet told.

During the interview, Madoff expressed considerable regret for his crimes. He also claimed that the scheme took a psychological toll long before his ultimate downfall; that he didn't launch the destructive charade with malicious intent; that it was an accident that spiraled out of control, torturing him for years. Madoff insists that he isn't a sociopath. Even after everything he did, he insists he's a good person.

All of this has understandably been met with skepticism. In the hopes of shedding some light on Bernie Madoff's psychological profile, we got in touch with Peter Kramer, clinical professor of psychiatry at Brown Medical School. Kramer is the author of "Listening to Prozac" and "Freud: Inventor of the Modern Mind," as well as a contributor to Salon. While he took care never to weigh in directly on Madoff's psychology -- "psychiatrists are enjoined from diagnosing people they haven't interviewed," he emphasized -- Kramer did go into great detail analyzing the nature of sociopathy, the specifics of the Madoff case and the difficulties in identifying the oft-misunderstood psychological condition.

What are the distinguishing features of sociopathy?

First of all, this is something that starts young. The diagnosis, as it stands now, wants you to have some signs of it by age 15. Then there's this list [of symptoms] that has to do with not conforming to norms, not respecting legal behaviors, repeated deceitfulness, impulsivity, poor planning ability, irritability, aggression, disregard for the safety of others, inconsistent work behavior, irresponsibility, not honoring financial obligations. And then there's the big one: lack of remorse, indifference, rationalization about people you've harmed or mistreated. If we think of some essence of the disease, that has something to do with it -- people who just don't seem to have a conscience, who don't feel guilt. That's what we'd like to be the sociopath or psychopath.

When I was reading the article, one of the things that came across was that Madoff articulated a great deal of remorse. The characterization was of him as a person who does express features of empathy. Is it possible for somebody to show the outward affect of having a conscience, of feeling remorse and empathy, and still be a sociopath. Or, is that too simplistic a question?

There's an inherent problem with asking a sociopath if he's a sociopath. That's not to say that Madoff is a sociopath, but let's imagine for the moment that he is. Sociopaths, on the whole, make their living by being good at fooling people. When we imagine that Madoff is a sociopath, we're imaging that he is someone in whom people don't detect that very easily. The testimony that he feels remorse and so on would have to be taken on that basis. It's said that doctors are not very good at diagnosing sociopaths and that in treating them they often get their hopes up. They see signs of progress and they testify to the court that a person is now better and the person goes out and does something again.

Even when you narrow the consideration to just interviewing the person, you don't necessarily make a lot of progress on that question. You'll want to know a lot more about what went on privately over many years. There were some hints in this article -- anger, irritability, taking a very superior stance within the family. I suppose you would want to know how characteristic that is [of sociopathy]. This question -- of conduct and attention to law and propriety; having a disorder that starts at age 15 -- is something you really gather not just by speaking with the person whose diagnosis you're trying to make.

But I think what's interesting about the New York magazine article, to get to the heart of the matter -- and setting aside our ability to discern the truth, which I think is fairly little based on that set of phone calls and interviews -- is that we can imagine. The article gives us the basis for imagining, in fiction, a character who does very terrible things and is not a sociopath. What's fascinating about the article is that the story it tells is a story that allows us to imagine a different character.

In one of my hats, I'm a writer. And I can imagine that I write a book that's very successful. Somebody says to me, "Can you write another book on a different topic?" And I know I'm not very good at it. But then the ante is raised: I'm offered more inducements. I'm flattered. Then all of a sudden I find myself in a project where I'm way over my head. The money is coming in. At what point do I say, "There's no way I can deliver this. I'm just not that kind of a writer." Of course, what's hard about it for those of us who have very strong consciences and are very prone to look at the self, is that when we're writing the most ordinary book, the one we should be writing, we actually feel that way -- like we've pulled the wool over somebody's eyes and we're way out on a limb. Who can we tell? We'd be ashamed to tell our family that we failed at this and don't want to tell the editor, so we drag it out for another year.

It's not like that kind of act necessarily means you're a sociopath; even the failure to confess, or failure to mitigate and make it better along the way. I think when Madoff puts himself in that narrative -- it was a little of this, and it was attractive; and if he could hold on for another year or two, if the markets changed, he would make it all right -- it's the scope of the fraud that makes it harder to believe that narrative.

But, on the other hand, in a sense, it’s the commonest thing in the world. If the numbers were smaller and the number of years was smaller, we would be more prone to believe it. Maybe it has to do with the modern world. When you start this sort of thing -- communication is so quick and the bankers are so greedy -- the story just plays itself out on an enormously larger stage.

That was really what jumped out at me: While the context seems kind of unfathomable and egregious, at the same time, the story he was telling tapped into a number of pretty human experiences and insecurities, just blown up to epic proportions.

Yes. If we were writing a Saul Bellow-slash-Woody Allen comic novel of personalities writ very large, and we take sociopathy per se off the table, but allow a lot of narcissism and a touch of mania and a lot of circumstance, we could make a comic story in which the character would be perfectly convincing to us, yet have a lot of conscience, particularly in certain areas. You could imagine the person doing this act that's very harmful to many people but at the same time feeling very bad that something's happened to his dog or his cat or his girlfriend. And, it's not at all a case of absence of conscience. It's a case of a blinding self and willful screening-off of the conscience in this particular realm.

That said, to the extent we're trying to be medical and make a diagnosis, the cliché in medicine is that when you hear the thunder of hooves, think horses, not zebras. The horse in this case, I think, is the sociopath.

Stepping away from Madoff in particular, there's this archetype that's developed in recent years of Wall Street sociopaths. Taken to its extreme, there's the Patrick Bateman character in "American Psycho," this idea of the evil banker with no conscience or emotions, demonstrating sociopathic tendencies. Do you think there is anything to that idea?

It seems to me that the bigger problem with Wall Street -- in the go-go era and somewhat after -- is that a culture was created in which all sorts of people could behave in ways that were destructive to society. I don't think that something flourishes in this way if everybody needs to have the same personality style to make it work. It doesn't seem to me that you would need to be a sociopath to be a part of an enterprise that takes the whole society through a crash.

This question of conscience, which we think is at the core of this, seems to me more complicated than the diagnosis of sociopathy makes out. I have worked with psychopaths and sociopaths -- not often, but they enter my practice for the ordinary reasons -- and I think there are people who just make you shiver because it seems like they would do anything to anyone at any moment.

But there are certainly other people who seem to, in their business dealings, have no conscience; but who are also very worried about the health of a relative, seem considerate within a circle of people that they care about, and who can actually be very pleasant in the therapeutic hour. When I say pleasant, that includes some sense of being complexly thoughtful about moral issues. [But] when their own interests are at stake, they seem to be able to do things that most people would say are beyond the pale and would be entirely unwilling to do.

I think there may be a spectrum here, where people aren’t endowed with no conscience at all. It’s a very complicated mixture of nature and nurture and the cultural environment. And it goes beyond a spectrum to this area: The word that comes up in that article is "compartmentalization."

That being said, I suspect in these cases where things go very, very wrong, the obvious diagnosis remains the likeliest one.