Why don't right-wingers look at Obama's mother to understand his politics? Oh yeah -- she was white! Updated. 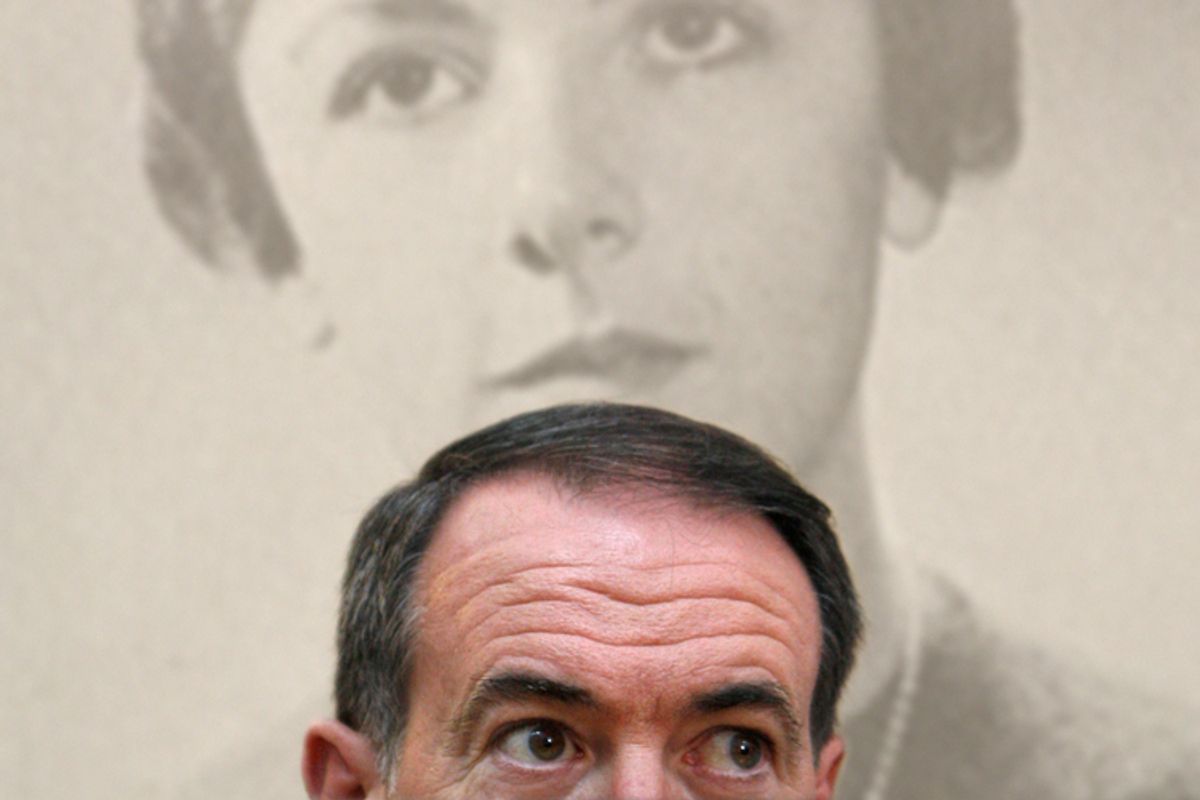 Mike Huckabee's been trying out for the role of the reasonable, avuncular GOP wingnut, in advance of a likely 2012 presidential run. When mean-girls Sarah Palin and Michele Bachmann savaged Michelle Obama's healthy-eating campaign last month, the cuddly, Smurfy Huckabee, who's publicly struggled with a weight problem, defended the first lady. Even in his outrageous interview with right-wing-radio knuckle-dragger Steve Malzberg, Huckabee probably thought he was being a voice of comparative reason, quelling birther madness by saying that if President Obama truly wasn't born in the U.S., those vicious Clintons would have run him out of the 2008 race (and maybe into an early grave with Vince Foster) -- so he thinks the president was probably born here.

It was Huckabee's foray into Obama's alleged childhood in Kenya -- of course he never visited Kenya as a child, though he spent four years in Indonesia -- that got him in some trouble for the Malzberg conversation. Some trouble, but not much; in fact, two journalists I respect, Dave Weigel and Ben Smith, have actually tried to defend Huckabee's distorting Obama's childhood history, arguing that the friendly Republican was actually fighting birtherism and trying to get at some actual truth about the president's personal and political background, even if he got his facts wrong.

In case you missed it, Huckabee went off the rails when he tried to indulge the spirit of birtherism -- that the president isn't American, in fact he's anti-American -- by agreeing when host Malzberg asked: "Don't you think we deserve to know more about this man?" Huckabee answered:

I would love to know more. What I know is troubling enough. And one thing that I do know is his having grown up in Kenya, his view of the Brits, for example, very different than the average American. When he gave the back the … bust of Winston Churchill, a great insult to the British. But then if you think about it, his perspective as growing up in Kenya with a Kenyan father and grandfather, their view of the Mau Mau Revolution in Kenya is very different than ours because he probably grew up hearing that the British were a bunch of imperialists who persecuted his grandfather.

It may be, as Steve Kornacki notes with alarm, that Huckabee is going to survive this gaffe by having a spokesman breezily say, "Governor Huckabee simply misspoke when he alluded to President Obama growing up in 'Kenya.' The Governor meant to say the President grew up in Indonesia." That is, of course, ridiculous: There was no Mau Mau Revolution in Indonesia, which was run by the Dutch, not the British. (Side note: The fact that the president is in trouble for replacing a British hero, Churchill, with an American hero, Lincoln, is also kind of unbelievable; if he'd traded Lincoln for Churchill the same people would be attacking him as a snobby Europhile. Also: He didn't give the Churchill bust back to the British; he moved it to another room.)

Huckabee's claim that the president spent his childhood in Kenya is, of course, factually wrong, but he's not the first to try to paint Obama as anti-American because of the views of his Kenyan father. In his crackpot book "The Roots of Obama's Rage," Dinesh D'Souza made the same case -- that Obama harbored an anti-colonial, and therefore anti-white, animus because of his father's support for Kenyan independence -- while leaving out Huckabee's fiction that Obama actually lived there. Back in September, Newt Gingrich called D'Souza's book "brilliant."

The Plum Line's Adam Serwer has taken the lead in eviscerating Huckabee. "Stripped down to its core, this kind of argument isn't any more complex than arguing that all of the president's political beliefs come down to his race and ethnic heritage," Serwer argued yesterday in the Washington Post. The normally smart Ben Smith disagreed, retorting:

Obama's roots in politics, to the degree he thought about foreign policy at all, are on the left, in the campus anti-nuclear movement and in an academic Chicago milieu in which Palestinian activists recalled him as sympathetic. He moved right on all sorts of things as he approached the national stage, but as he puts a very personal stamp on American foreign policy at a turbulent moment, it's legitimate to look at his personal education.

Smith also denies that race has anything to do with the right's strange fixation on Obama's alleged Kenyan background.

I've got to side with Serwer here. I absolutely believe Obama's upbringing is fair game – but the emphasis on the anti-colonialism of the father he barely knew shows the right's obsession with the president's race, not his politics. In fact, the political views of Obama's white mother, anthropologist Stanley Ann Dunham, are far more relevant to the president's development than those of his activist-turned-alcoholic Kenyan father. Ann Dunham is the one who brought her young children to Indonesia, where she wrote her doctoral thesis on the culture and economics of Java's rural metalworkers. She built a career around rural development, microfinance and women's welfare. You could probably fairly describe her views as "anti-colonial." But almost no one ever talks about her progressive political work, and its influence on her son. You could still probably red-bait the president with the Middle American Dunham's compassionate, globalist politics, but that wouldn't be nearly as damaging or scary as pointing to his black Kenyan father. Plus, how would you get to use the term "Mau Mau"?

Huckabee should be ashamed of himself.

Update: A few thoughts after doing a "Hardball" segment on Huckabee's comments. First of all, isn't it safe to say we're all anti-colonialist now? What do Tea Partiers think their forebears were protesting -- why, it was anti-British colonialism! Why do Tea Partiers hate white people?

And I have said many times, publicly, that I do think he has a different worldview and I think it is, in part, molded out of a very different experience. Most of us grew up going to Boy Scout meetings and, you know, our communities were filled with Rotary Clubs, not madrassas.

Folks, he's doubling down on his "Obama ain't quite American" gambit. Stay tuned; he's the frontrunner in the most recent NBC/WSJ poll of possible Republican presidential nominees.

Here's my "Hardball" segment with Chris Matthews and David Corn: