Why NBC should close "The Office"

As the show struggles to replace Steve Carell, it's becoming increasingly obvious that it shouldn't even try 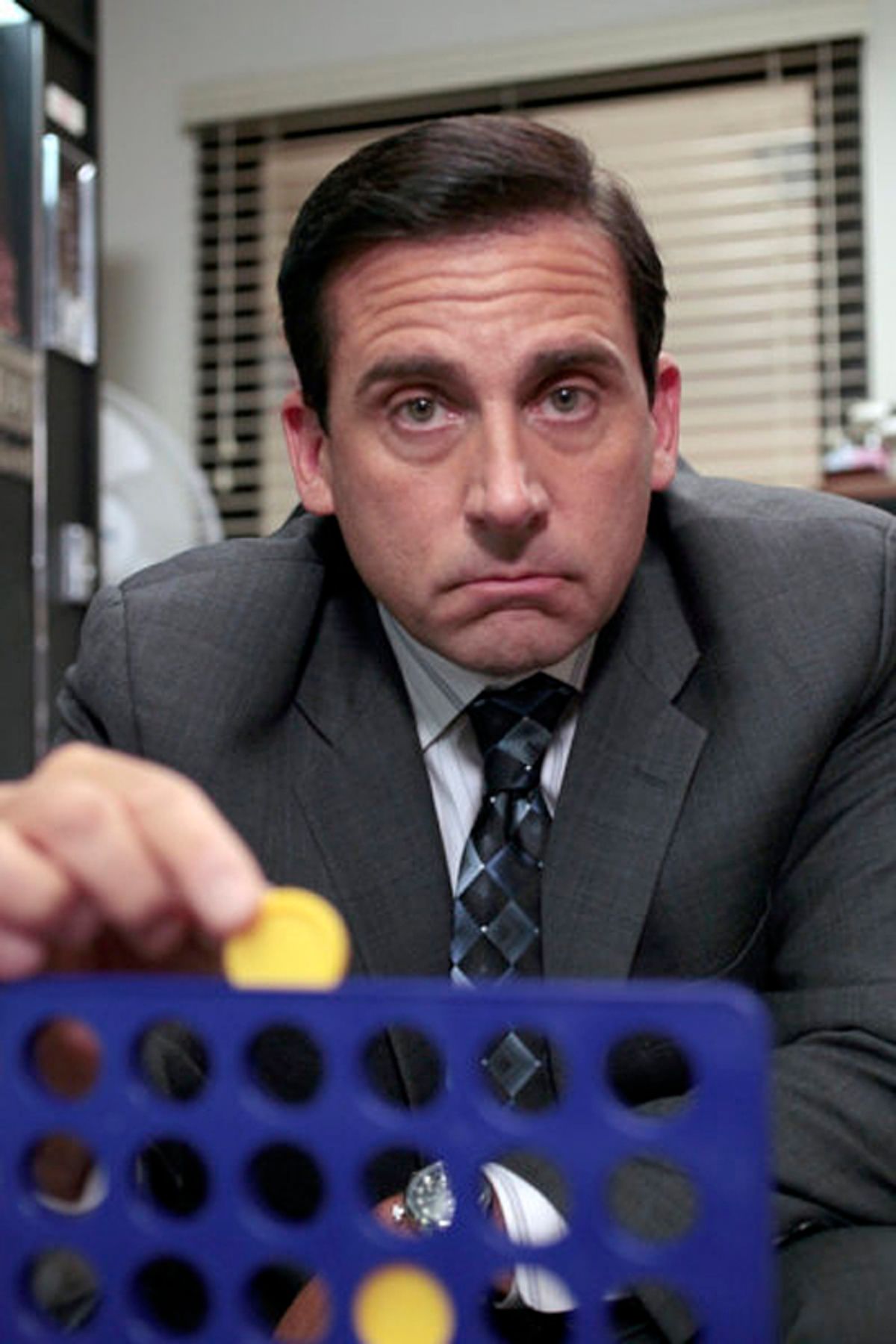 Yes, NBC's "The Office" is still funny. Given the level of talent involved, how could it not be? But as it nears the end of its seventh season (and airs a six-episode marathon March 3 at 8 p.m./7 Central) you can sense a weariness and desperation setting in as the show prepares for life without boss-from-Hell Michael Scott (Steve Carell). This year there have been too many instances where the laughs were light and the actors seemed to be stretching to fill time -- moments where even a die-hard fan could wonder if they might have been better off quitting while they were ahead (everybody has a different definition of "ahead," but I'd go with Season 4 or 5). In its final stretch "The Office" often feels less like a fully imagined comic universe than the longest, greatest "Saturday Night Live" sketch ever. The sitcom rarely musters that squirm-inducing, human train wreck quality that made it a worthy remake of Ricky Gervais' British original. Has it simply mellowed over time, as a person might? Or are we seeing yet another example of network TV's factory mentality (26 episodes a year, series run extended indefinitely) squeezing the vitality and focus from a once-great show?

The Feb. 18 episode "Threat Level Midnight," in which we got to see a movie that office manager Scott had been secretly working on for years, was a more elaborate, less funny reworking of the Season 2 episode "The Client," in which the office gathered to read Michael's screenplay -- and it wrought havoc with continuity. (How is it possible that no one involved with Michael's epic discussed it until now? When did he find time to work on it? And don't you think it's funnier to hear people read Michael's fantasies rather than see them enacted?) The episode with "Justified" star Timothy Olyphant as a handsome salesman for a rival paper company was mostly lame (and asked Olyphant, a wicked wit in real life, to play a blandly reactive character yet again). "The Seminar" was weaker than it should have been, given the premise, and I found Gervais' cameo lame and unconvincing (it felt more like Carell and Gervais goofing around than an organic moment).  The "Viewing Party" episode built around "Glee"  had a few good moments (including the revelation of Dwight's uncanny baby-handling abilities); but it mostly prompted fond memories of an earlier, superior off-campus episode, Season 4's stunningly uncomfortable "Dinner Party." And I found last week's episode, "Todd Packer," almost unbearable, not because I despise the title character played by David Koechner, but because the episode seemed to want me to take Michael Scott's sudden souring on Packer as evidence that he's maturing, or at least growing more thoughtful. (More on that in a moment.)

That might be the root of any problems the series is currently grappling with. The impending exit of Michael Scott (four episodes before the season's end, to smooth the way for his replacement) reveals how "The Office," a classic ensemble-driven show on paper, slowly but surely became "The Michael Scott Show" thanks to Carell's brilliance and popularity.

The departure of a show's passive-aggressive, misery-inflicting lead should not be nearly this problematic for the series or the audience. It should be a simple matter of engineering Michael's exit, setting the stage for his replacement by another manager, and preparing for a Michael-less season. But somehow it became a conundrum as vexing as the prospect of replacing Archie Bunker on "All in the Family" or Sheriff Andy on "The Andy Griffith Show" or fill-in-the-name-of-an-unquestioned-lead-sitcom-character-here. Almost the entire run of Season 7 has dealt, in some way, with Carell's announced departure (with certain wonderful exceptions, including the "Sweeney Todd"-driven community theater episode "Andy's Show," which featured Dwight's great line, "All that singing got in the way of some perfectly good murders").  But the simple fact is, Michael Scott cannot be replaced because the series made him irreplaceable.

In light of that, it probably wasn't a great idea to turn this season into what some viewers are calling "The Michael Scott Farewell Tour," complete with trips down memory lane (notably "Sex Ed") that imply an almost Ebenezer Scrooge-like level of existential panic and introspection on Michael's part. I am not convinced that we should be the least bit sorry to see Michael go, or feel much of anything toward him except disquieting wonder at how series TV always suckers us into caring for fictional characters over time, even fatuous twits who lord over workplaces like whitebread dictators. (That's one of the many major differences between British and American television: British TV accepts that certain characters are beyond redemption and is perfectly OK with that. The postscript to the original series, "The Office Christmas Specials," basically slow-roasted Michael's British alter ego, David Brent, over a low flame and allowed him only a glimmer of humanity at the end -- but no redemption.) But "The Office" has chosen to go in a more "M*A*S*H"-like direction, growing warmer over time, so it can't destroy or even humiliate Michael, only redeem him.

Where can the show go from here? I can't imagine. There's a script circulating online that purports to be a leaked copy of the finale, but with its uncharacteristic grimness and graphic violence it seems an obvious put-on. Forget truly black comedy: Michael can't even be vilified and tenderized à la David Brent, because that's not the American sitcom way. He has to go out on a bittersweet, even likable note because that's what he has become -- by the show's choice, and by virtue of U.S. TV conventions.

And that's where the show seems to be going, as evidenced by all the little moments this season where Michael seemed to gain a self-awareness (and an ability to laugh at himself) that he'd previously lacked. (Exhibit A is Michael's shifting reaction during the screening of "Threat Level Midnight" -- evolving from panicked defensiveness to light self-mockery and an admission that his pet project pretty much sucked.) Michael's employees openly dispute his judgment more often, and even call him out publicly on his stupidity in no uncertain terms -- and for the most part, Michael can handle it. He's growing as a person.

In one sense, that's laudable; TV generally doesn't do profound character change very well (especially in comedies), and while it feels a bit forced in Michael's case, the program is so likable and the actors so charming that we're inclined to give it the benefit of the doubt. At the same time, though, Michael's softening is very bad for the series, because it gives this seven-season program the feeling of a complete arc, almost a little comic novel for TV with its own internal logic and what might even prove to be a satisfiying ending. The only problem with good endings is, when a story feels over, it needs to actually end. Prolonging it (or trying to start all over again with a new lead character) is just asking for trouble.

No matter how they send him off or try to smooth the transition to Character X taking over, I can't picture anyone in the current cast filling Michael's shoes -- not in a way that will justify continuing the show long-term. An "Office" driven by Dwight (Rainn Wilson) or Andy (Ed Helms) would be too antic and one-note. The excellent Darryl Philbin (Craig Robinson) has been mentioned as a semi-surprise candidate, but I can't see that happening, either; broadcast TV is a racist business, and NBC doesn't build sitcoms around African-American leads, period. I can't see Will Ferrell, who's doing a four-episode arc this season, signing on to do 26 sitcom episodes a year -- not with his movie career still percolating. ("He makes $20 million a film," Rainn Wilson told Entertainment Weekly, with his characteristic bluntness.) Last year there was talk that Harvey Keitel might come on board (an interesting choice, given his slow-burn intensity), but that didn't amount to anything. I'd be interested to see Kathy Bates -- who cameos as Michael's boss, and who currently stars on another NBC series, the horrible, soon-to-be-canceled-by-the-grace-of-God "Harry's Law"  -- take over. Her character has a similarly relentless small-mindedness, but she's female, more brusque, and a sharper wit, so she wouldn't be a Michael Scott clone.

But really, it's damned hard to see anybody replacing Carell. He is "The Office," for better or worse, and anything after his departure will necessarily feel like a postscript.

The smartest move would be to make the final episode of this season the final episode of the series, too, and maybe just avoid catharsis or introspection or redemption and just quietly turn out the lights, as NBC did almost 20 years ago when "Cheers" ended. But we all know that's not possible. The series is the anchor of NBC's Thursday night lineup. The corporate bottom line dictates that the "The Office" will stay open no matter what.