Q&A: The congressman who beat "Watson" on "Jeopardy"

"I think he had a low-voltage night" 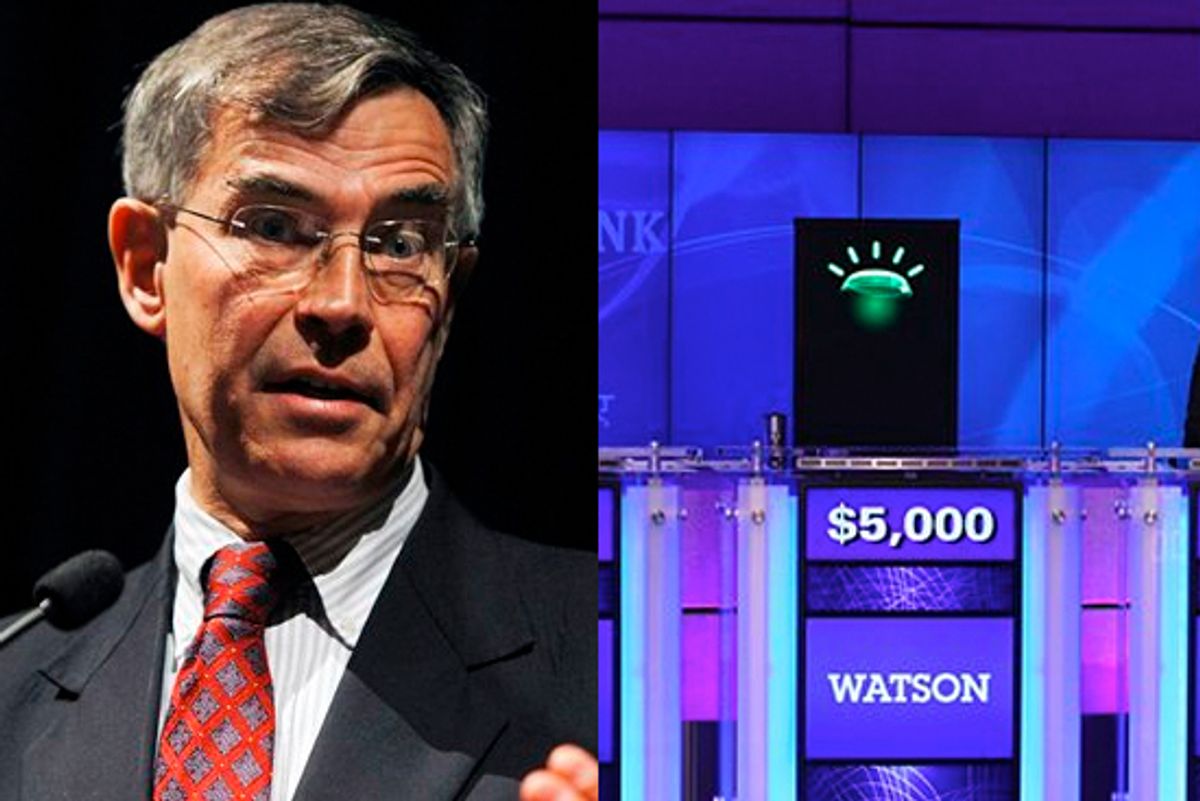 John Connor lives, and he's a congressman from New Jersey.

Democratic Rep. Rush Holt, who helped run the Princeton Plasma Physics Lab before winning his House seat in 1998, scored a win for humanity on Monday night when he defeated "Watson," the "Jeopardy"-playing supercomputer that had previously crushed Ken Jennings and Brad Rutter, two of the quiz show's most successful past champions. We caught up with the 62-year-old Holt, himself a former five-time "Jeopardy" winner, on Tuesday.

How does it feel to beat a supercomputer?

I think everybody should understand that Watson was operating -- I think he had a low-voltage night. But, of course, "Jeopardy" is fun ---  we all love to play along,  so it's fun to have the chance to play. But mostly it's fun to highlight what IBM is highlighting here, which is the importance of innovation and research, and developing new software. Before I came to Congress, I'd been talking about the need for good science education, the need for better investment in research. Because that's what this is about. That's what we're highlighting here.

You worked as a nuclear physicist for 12 years before you ran for Congress. What's it like to be such a science guy in a Congress that includes creationists, global warming skeptics and other legislators who are not particularly science-friendly?

Well, you know, I worry that some of my colleagues do operate in a fact-free zone [laughs]. But I serve in the House of Representatives, with an emphasis on the word "representative" -- this is what we see across America. A lot of people shy away from science;  they think that only the computer geeks can do science. And the point is that this is broadly important. Ever since I can remember, I've been interested in a lot of different things. I've been interested in how people get along -- that's politics. And I've been interested in how the world works -- that's science. There's nothing incompatible with those two [things]. My friends who are scientists  appreciate the need for good political process. So, you know, I've spent much of my career trying to merge those things. To get scientists involved politically, and to make sure that other people who aren't scientists --- particularly policymakers -- support science education for everyone and support research.

How do you counteract those types of assumptions?

Did you have a strategy when approaching this computer?

So you didn't practice?

You know how it is here: We run from one meeting to another meeting, from hearing to floor vote to meeting with constituents to -- well, in this case, to an IBM reception where they'd set up a mock "Jeopardy" game. So I was running in and running out, pushing the buzzer as quickly as I could on each question, and hoping that I could beat Watson.

Was there anything distinct about playing a machine as opposed to a person?