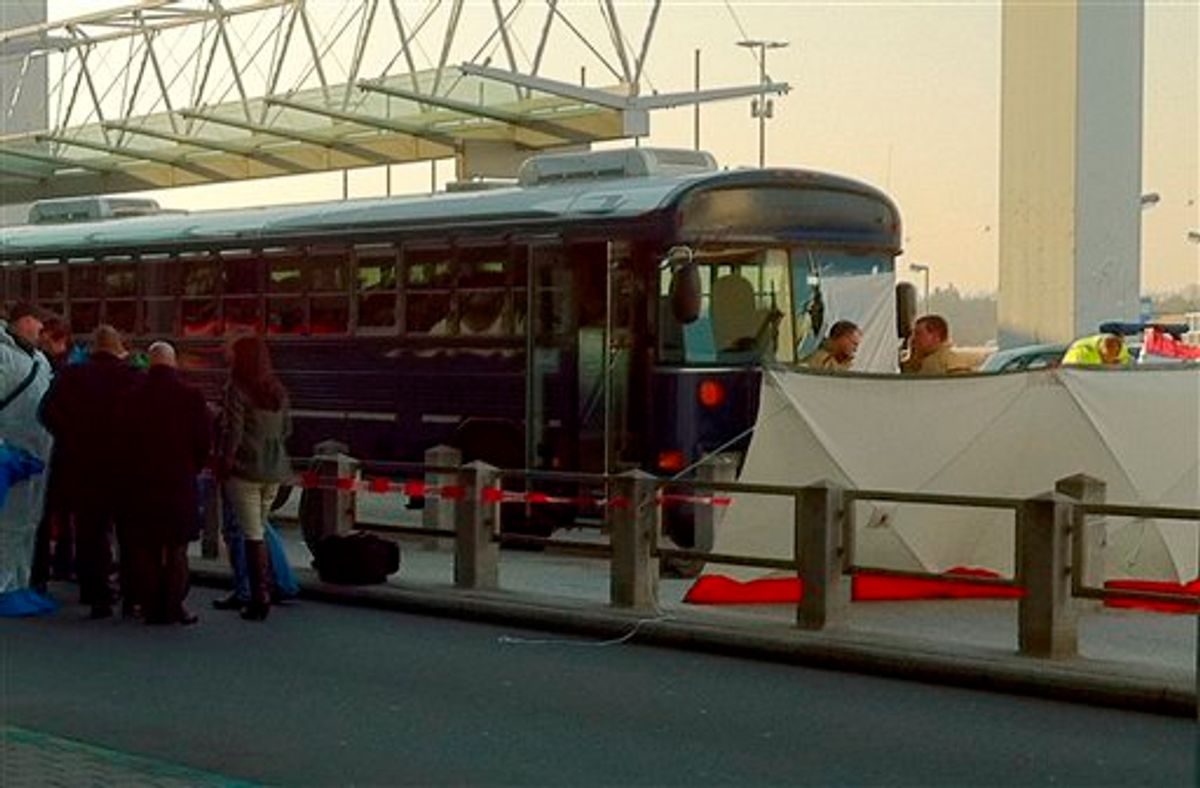 Police surround a bus carrying U.S. soldiers at the site where two US soldiers have been killed in a shooting in front of Terminal 2 of the Frankfurt airport, Germany, Wednesday, March 2, 2011. (AP Photo/dapd, Alexander Becher) (AP)
--

FRANKFURT, Germany (AP) -- The U.S. Air Force says two of its airmen have been killed and two wounded in a shooting outside Frankfurt airport.

Spokeswoman Maj. Beverly Mock said German police have the suspect in Wednesday afternoon's shooting in custody and that she could not release any further details on the victims until their next of kin have been notified.

A gunman fired shots at U.S. military personnel on a bus outside Frankfurt airport on Wednesday, killing two people and wounding two before being taken into custody, authorities said.

Kosovo's interior minister told The Associated Press that German police have identified the gunman as a Kosovo citizen.

The attack came as the bus sat outside Terminal 2 at the airport, Frankfurt police spokesman Manfred Fuellhardt said.

The two killed were the bus driver and a passenger, and one person suffered serious wounds and another one light injuries, Fuellhardt said. The spokesman could not confirm whether any of the casualties were U.S. military personnel.

The U.S. Army in Europe referred calls to the Air Force, but a spokeswoman said she could not immediately confirm that the casualties were airmen nor give any details of the incident. The bus had a U.S. government license place marked "AF" for Air Force.

Still, German Chancellor Angela Merkel told reporters in Berlin that two American soldiers had been killed, as she condemned the "terrible incident."

"We'll do everything possible to find out what happened," she pledged.

At the airport, taxi cab driver Salimi Seraidon said he was sitting at a stand about 200 yards (meters) away when the attack took place, and that it was over quickly as police rushed onto the scene.

"We just heard the shots," he said.

Fuellhardt said he could not give out any information on the suspect, but authorities in Kosovo said he was a citizen of the tiny Balkan nation.

Kosovo Interior Minister Bajram Rexhepi said in an interview that German police have identified the suspect Arif Uka, a Kosovo citizen from the northern town of Mitrovica.

"This is a devastating and a tragic event," Rexhepi said. "We are trying to find out was this something that was organized or what was the nature of the attack."

Spokesmen for the Pentagon and the Air Force in the U.S. had no immediate information on the incident.

While German police had no immediate information on what could be behind the shooting, a member of the U.S. House Homeland Security Committee, Rep. Patrick Meehan, said in Washington that it looked like a terrorist attack.

The chairman of the subcommittee that focuses on terrorism and intelligence added he did not have all the facts about the shooting yet and was still being briefed by his staff.

But German news agency DAPD quoted Hesse's state interior minister, who had rushed to the scene of the shooting, as saying that there were no indications of a terrorist attack.