The alleged shooter in Frankfurt, a Muslim airport employee, says he worked alone and aimed for Americans 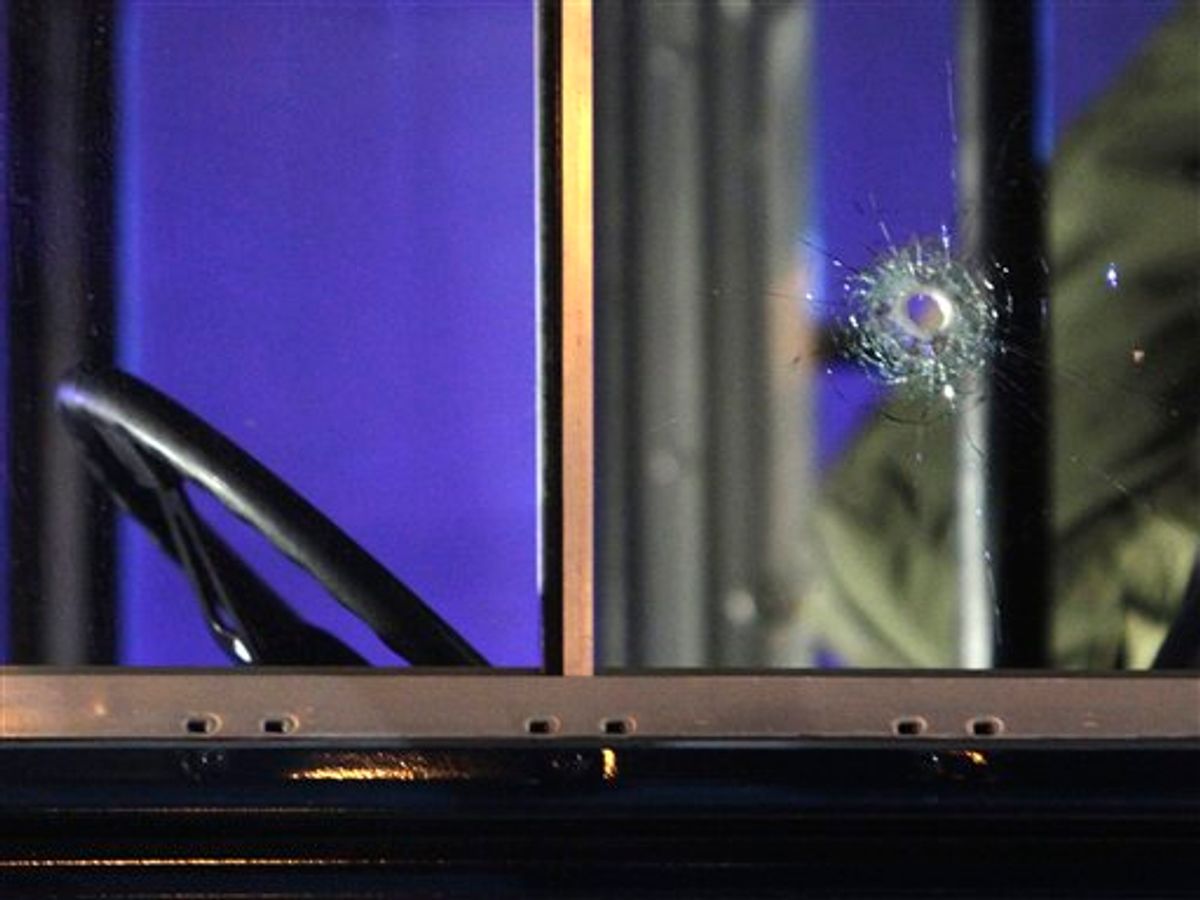 A bullet hole is seen in the driver's window as the bus is towed away after a gunman fired shots at U.S. soldiers on the bus outside Frankfurt airport, Germany, Wednesday, March 2, 2011 killing two airmen and wounding two before being taken into custody. (AP Photo/Michael Probst) (AP)
--

The suspect in the slaying of two U.S. airmen at Frankfurt airport has confessed to targeting American military members, a German security official said Thursday as investigators probed what they considered a possible act of Islamic terrorism.

German federal prosecutors took over the investigation into Wednesday's shooting, which also injured two U.S. airmen, one of them critically. They are working together with U.S. authorities.

Hesse state Interior Minister Boris Rhein told reporters in Wiesbaden that the suspect, identified as a 21-year-old ethnic Albanian from Kosovo, was apparently radicalized over the last few weeks. The attacker's family in northern Kosovo identified him as Arid Uka, whose family has been living in Germany for 40 years.

The suspect opened fire on a busload of U.S. airmen on their way from their base in England to serve in Afghanistan, said Marine Col. Dave Lapan, a Pentagon spokesman.

Uka's family said he worked at Frankfurt airport and was a devout Muslim. He was taken into custody immediately after the shooting and is to appear later Thursday in federal court in Karlsruhe.

There was disagreement Thursday between German and American officials whether the suspect may have had help. So far, German investigators thought he did not, but Americans were not ruling that out yet.

"From our investigation so far we conclude that he acted alone," Rhein said. "So far we cannot see a network."

Though the U.S. Embassy in Kosovo's capital of Pristina referred to "the act of a single individual," Lapan at the Pentagon said was still not clear whether others could have been involved in planning the attack.

"One of the key focuses if the investigation will be to determine whether others were involved in the incident besides the shooter," Lapan said.

"Given the circumstances, there is a suspicion that the act was motivated by Islamism," they said in a statement, without elaborating.

Rhein said the suspect's apartment and his computer have been searched and investigators were looking to shed further light on his motives. He said investigators believe the suspect had contact with other radical Muslims on Facebook "but there is no network in the sense of a terror cell."

"There are signs that this is about a radicalized Muslim," he said.

The suspect's Facebook photo features a silhouette of Kosovo, with the phrase "There is no God but God and Mohammad is his prophet" written above it on Arabic. Rhein said the suspect recently changed his profile name from his real name to the nom de guerre "Abu Reyyan."

One of his Facebook friends said he knew little about him.

"He was very unremarkable and low-key," Kerem Kenan wrote to The Associated Press. "We had no personal contacts. I'm appalled by the incident."

One airman remained in critical condition after being shot in the head and the another wounded airman was not in a life-threatening condition, Frankfurt police spokesman Juergen Linker told the DAPD news agency. None of the victims have been publicly identified, pending notification of next of kin.

At his father's home in Frankfurt on Thursday, a man yelled at reporters to "go away," threatening to call police. Neighbors described Uka as a loner who kept to himself, but never seemed unfriendly.

"I do think he was religious, but he is just a normal young guy -- completely normal," neighbor Katharina Freier told AP Television News. "We were all shocked."

Kosovo is mostly Muslim, but its estimated 2 million ethnic Albanians are strongly pro-American due to the U.S.'s leading role in NATO's 1999 bombing of Serb forces that paved the way for Kosovo to secede from Serbia.

The U.S. Embassy in Pristina said the attack "will in no way affect the deep and abiding friendship between our two countries."

Uka's uncle, Rexhep Uka, said the suspect's grandfather was a religious leader at a mosque in a village near the Kosovo town of Mitrovica, and that Arid Uka was a devout Muslim himself. But he also said the family was pro-American and was also having a hard time imagining that their nephew was involved.

"I love the Americans because they helped us a lot in times of trouble," he told the AP in Kosovo. "I had an American neighbor and we never had a problem. What happened in Germany is beyond me."

Behxhet Uka, a first cousin of the suspect, said he had spoken to the gunman's father in Frankfurt by telephone several times. The family told him that all they knew was that their son did not come home from work Wednesday at the Frankfurt airport.

"We heard about this from the local police," he said. "I would hope that this is not true, but if it is true, it will be very hard for us here in Kosovo. We could not imagine something like this would happen because Americans are our brothers."

Mitrovca, a former mining town, has also been the focus of reports that it breeds radical Islamic extremists.

Frankfurt airport spokesman Alfred Schmoeger said he had "no information" about Uka working at the airport, but said it was being checked.

Police said the attacker had an altercation with U.S. military personnel in front of a bus outside the airport's Terminal 2. They said the man started shooting, then boarded the bus briefly and was apprehended by police when he tried to escape.

The airmen, based in the Lakenheath airfield in eastern England, were bound for Ramstein Air Base, from where they were to have been sent to Afghanistan.

The U.S. has some 50,000 troops stationed in Germany. It operates several major facilities in the Frankfurt region, including the Ramstein Air Base, which is often used as a logistical hub for operations in Afghanistan and Iraq.

In Washington, President Barack Obama promised to "spare no effort" in investigating the slayings.

"I'm saddened and I'm outraged by this attack," he said.