How a birther thinks: A demonstration 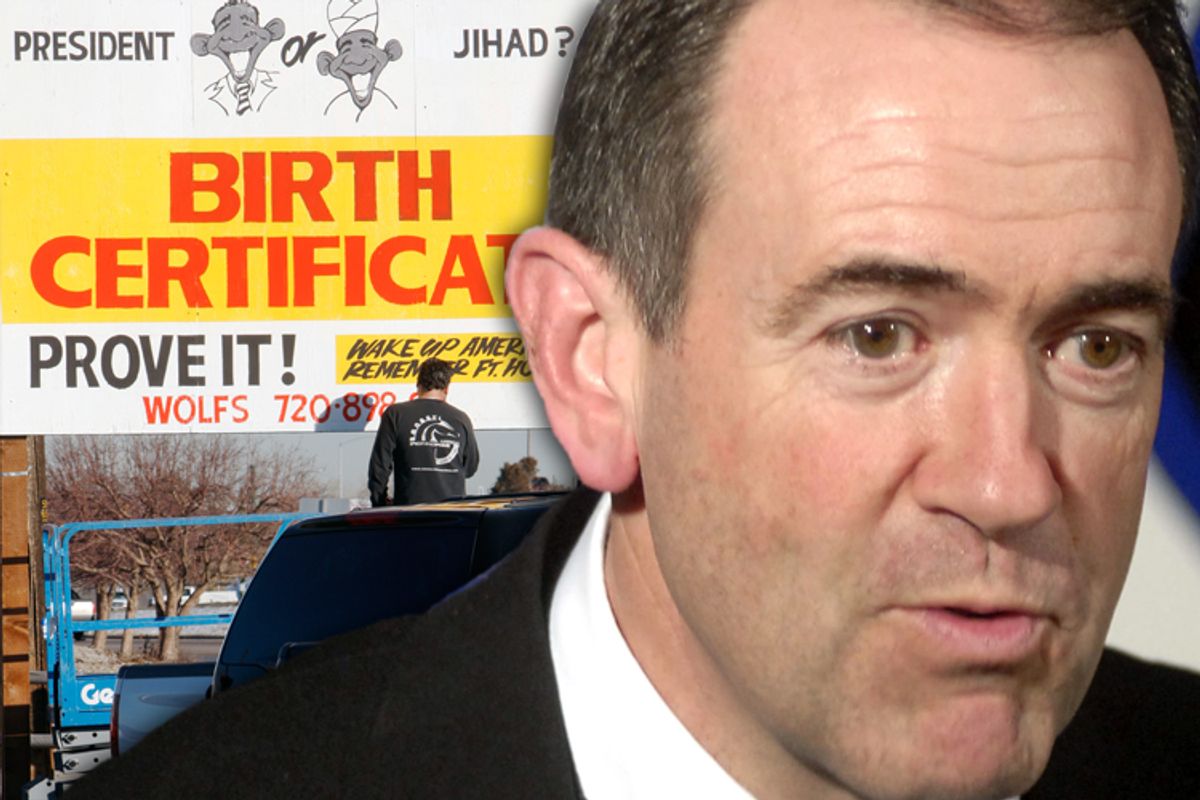 Mike Huckabee's defenders have made much of the fact that he's never endorsed the idea that President Obama wasn't born in the United States. Therefore, he's not a "birther" and his comments on a conservative radio show earlier this week are those of a man who either "didn't mean it" and "clearly misspoke" or who is guilty of an "odd" but relatively benign ignorance about Obama's biography.

As I've noted, these defenses fall flat on several levels. Even if you put the birther issue aside, It should be obvious that Huckabee didn't just misspeak when he claimed that Obama grew up in Kenya; after all, he went into detail about the effect that a Kenyan upbringing filled with stories from relatives about the horrors of British colonial rule and the glory of the Mau Mau uprising would have had on Obama's worldview and his actions as president today. Nor is this benign ignorance akin to (as Dave Weigel suggested) Obama being fuzzy on the details of Huckabee's life story. Obama, to my knowledge, is not promoting an inflammatory indictment of Huckabee's basic worldview and policy instincts that is based on an entirely and laughably false understanding of the circumstances of his upbringing.

Then there's the matter of birtherism. Yes, it's true, Huckabee is not claiming that Obama was born in Kenya -- or in Indonesia or in any country other than the United States. But, as Jonathan Bernstein pointed out earlier this week:

This is where birtherism gets tricky. In its wildest forms, birtherism is about a massive conspiracy to install a conscious, deliberate enemy of the United States in the White House. It's nice that Mike Huckabee doesn't subscribe to that. But in its more plausible, and presumably more popular forms, it's really just a way of saying that Barack Obama isn't a "real" American.

Which brings me to the e-mails we've been receiving in response to our coverage of Huckabee, which (as you might have noticed) has been on the critical side. Plenty of readers are upset with Huckabee's comments, to be sure, but I've also noticed an unusually large number of virulently anti-Obama e-mails written in Huckabee's defense. I'll readily admit that I don't know any of the people who are sending these individually; for all I know, some or all of them are fake. But I've gotten so many expressing the same basic sentiments that I think it's worth running one in its entirety:

Where were you when Obama had to think so hard that it hurt-his-brain when he stated he went to 57 states in his campaign?

You continued supporting Obama and covering up his mistakes because of his skin color.

Because you are white, You are So Racist and bigoted and can’t help it.

So why should you worry when someone thinks Obama was born in Kenya—especially when the Kenyan official government states he was born there.

Instead, Obama claims to be born in the last state to enter the Union, so how could Obama claim 57 states?

Is it because he is stupid?

Since you never brought it up, you must agree with someone that ignorant and stupid.

And why does Indonesia have a school enrollment certificate that categorically states Obama is a Muslim? And why can Obama recite the muslim evening call to prayer from memory if he is a Christian, but he is a member of the “God Damn America” church of the most reverend Wright.

You can deny facts all you want, just like the hide the decline global warmest conspirators but that does not make you right.

Smug maybe, because you like attacking selected people because you are bigoted and racist.

Again, I don't know the person who sent this to me. Who knows -- it could be a mischievous liberal having some fun by assuming the voice of a right-winger. But the points this e-mailer makes are representative of the points that many, many others have expressed to me this week. In that sense, I think this e-mail demonstrates how Huckabee's comments -- even though they didn't endorse birtherism in any literal sense -- encourage the exact kind of attitude that has led a majority of Republicans likely to participate in next year's primaries to express doubt over whether their president was even born in this country.

Note that the e-mailer didn't get the part where Huckabee resisted endorsing full-on birtherism. "[W]hy should you worry when someone thinks Obama was born in Kenya?" he/she asks. And note how quick the e-mailer is to latch onto the false equivalency that Huckabee has been promoting since the interview blew up -- that he committed a "slip of the tongue" no different from the slip of the tongue Obama committed as a candidate in 2008 when he said he'd visited 57 states. The difference between these episodes, as I noted yesterday, ought to be blindingly obvious.

Not all of the anti-Obama e-mails I received this week were as specific and detailed as this one. But almost all of them seemed to be written with the conviction that the president of the United States is a fundamentally un-/anti-American figure. Yes, the slice of the Republican Party base that actually bothers to send e-mails to Salon writers is very, very small. But the basic feelings expressed to me this week are more widespread. What Huckabee has done is to reinforce those feelings.