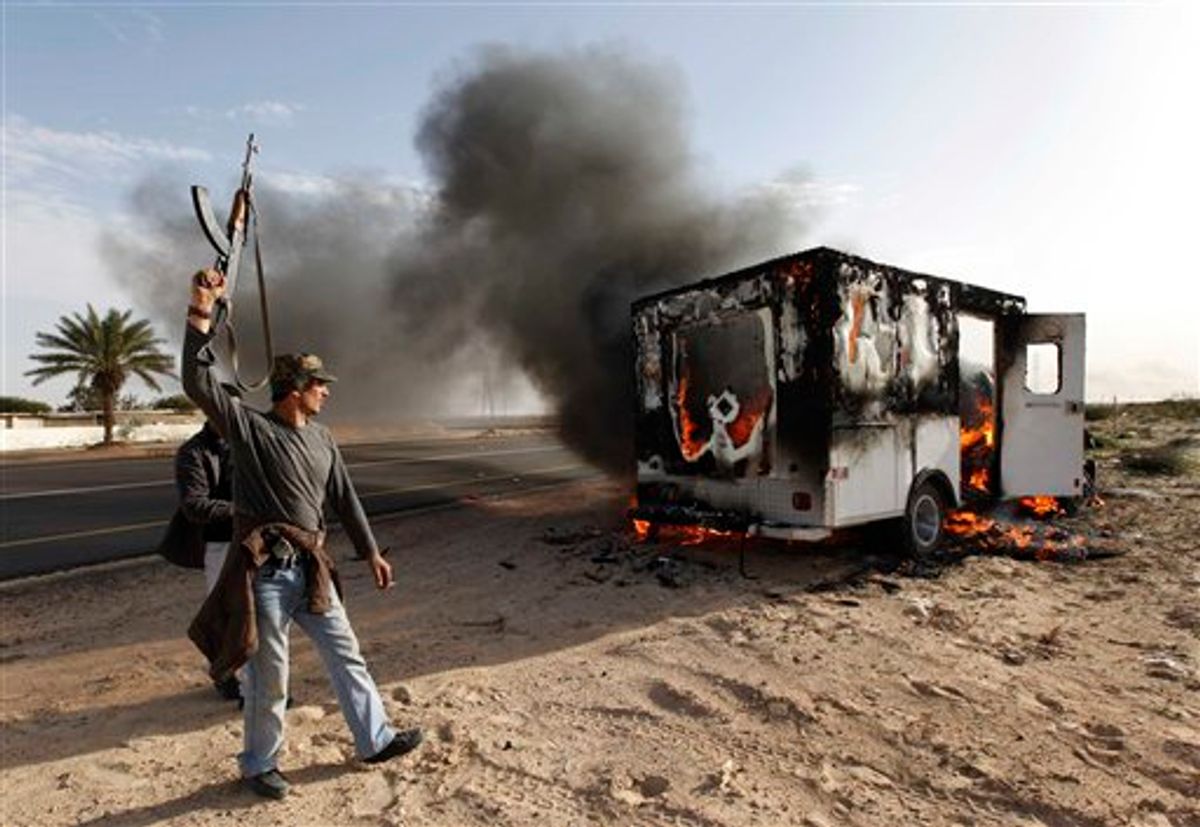 A Libyan rebel celebrates next to a burn pro-Moaamar Gadhafi fighters vehicle in the town of Brega, east of Libya, oWednesday March 2, 2011. Regime opponents battled forces loyal to Libyan leader Moammar Gadhafi who tried Wednesday to retake a key oil installation in a counteroffensive Wednesday against the rebel-held eastern half of the country. At one point in the flip-flopping battle, anti-Gadhafi fighters cornered the attackers in a nearby seaside university campus in fierce fighting that killed at least five. (AP Photo/Hussein Malla) (AP)
--

Libyan warplanes struck the oil port of Brega on Thursday, a day after armed rebels foiled an attempt by loyalists of leader Moammar Gadhafi to retake control of the strategic installation in the rebel-held eastern half of the country.

Witnesses could not immediately identify the target of the airstrike. But it was likely an airstrip that belongs to the huge oil complex on the Mediterranean coast.

The attack on Brega, some 460 miles (740 kilometers) east of Gadhafi's stronghold in the capital Tripoli, marked the regime's first counteroffensive in the rebel-held east. It illustrated the deep difficulties the Libyan leader's armed forces -- an array of militiamen, mercenaries and military units -- have had in rolling back the uprising that has swept over the entire eastern half of Libya since Feb. 15.

In the nearby town of Ajdabiya, also in the opposition-held east, morgue officials said the death toll from the fighting rose to 14 on Thursday. On Wednesday, health officials put the toll at at least 10. Many of the fighters who repelled the government forces in Brega on Wednesday came from Ajdabiya.

Brega is the site of Libya's second- largest petroleum facility and has been held by the opposition since last week.

Citizen militias flowed in from Ajdabiya and the opposition stronghold of Benghazi hours away to reinforce the defense of Brega on Wednesday, finally repelling the regime loyalists. They scrambled over the dunes of a Mediterranean beach through shelling and an airstrike to corner their attackers.

Opposition leaders are pleading for foreign powers to launch airstrikes to help them oust Gadhafi, who has ruled for 41 years.

The battle for Brega on Wednesday began just after dawn, when several hundred pro-Gadhafi forces in 50 trucks and SUVs mounted with machine guns descended on the port, driving out a small opposition contingent and seizing control of the oil facilities, port and airstrip. But by afternoon, they had lost it all and had retreated to a university campus five miles (eight kilometers) away.

There, opposition fighters besieged them, clambering from the beach up a hill to the campus as mortars and heavy machine gun fire blasted around them, according to an Associated Press reporter at the scene. They took cover behind grassy dunes, firing back with assault rifles, machine guns and grenade launchers. At one point, a warplane struck in the dunes to try to disperse them, but it caused no casualties and the siege continued.

Gadhafi's forces withdrew from the town before dusk. Car horns honked and people fired assault rifles in the air in celebration.

For the past week, pro-Gadhafi forces have been focusing on the west, securing Tripoli and trying to take back nearby rebel-held cities. But the regime has seemed to struggle to bring an overwhelming force to bear against cities largely defended by local residents using weapons looted from storehouses and backed by allied army units.

Pro-Gadhafi forces succeeded over the weekend in retaking two small towns. But the major western rebel-held cities of Zawiya and Misrata, near Tripoli, have repelled repeated, major attacks -- including new forays against Zawiya on Wednesday.